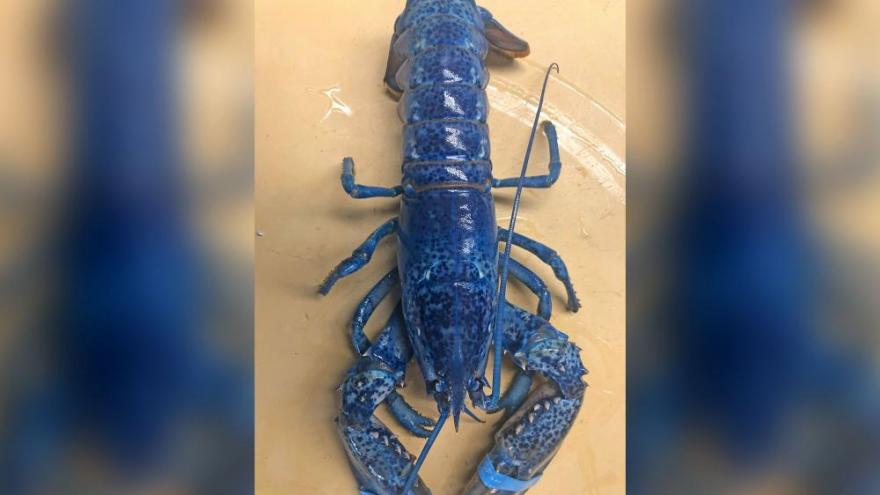 About 1 of every 2 million lobsters is blue, according to the University of Maine's Lobster Institute.

(CNN) -- Nathan Nickerson III almost couldn't believe his eyes when he saw an unexpected pop of color in his seafood shipment earlier this week.

It was one of many lobsters ordered by his restaurant, Arnold's Lobster and Clam Bar, in Eastham, Massachusetts -- except this one was blue.

"I said, 'I think we have something special here.' I couldn't believe the color," Nickerson told CNN. "Everyone was circling around it, just wondering, 'How did this happen?'"

The restaurant owner said he plans to keep it on display at the restaurant for about another week until he donates it to an aquarium. By allowing visitors to see the lobster, he hopes to inspire the younger generation's appreciation for marine life.

"I want the children to see ... (and) be interested in marine life and this is one way to get them excited about it," Nickerson said. "Maybe one can become the next marine biologist."

He has a specific aquarium in mind

Nickerson hopes to donate it to the aquarium opening later this year in St. Louis.

"We want this lobster to stay alive and stay safe."

Though many people have urged him to release the lobster back into the wild, Nickerson said he doesn't think that's feasible because the waters surrounding Cape Cod have a sandy bottom. This would probably be hard for a lobster to survive in.

"There's no place for the lobster to hide. They like rocky bottoms, and also there are thousands of lobster traps out there now," Nickerson said. "I'm sure it's going to get picked up again."

About 1 of every 2 million lobsters is blue, the University of Maine's Lobster Institute says.

Lobsters are typically reddish brown or greenish brown, and the rare blue coloration of this one comes from a genetic defect that causes the creature to overproduce a particular protein, according to the lobster institute.

"Lobsters are incredible creatures," Nickerson said. "They can live down hundreds, thousands of feet in the water, where it's so cold."