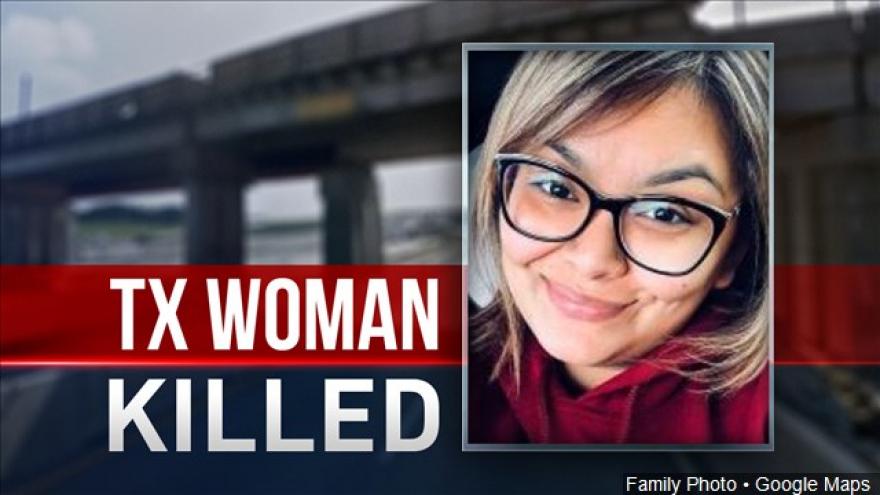 Keila Ruby Flores, a mother of 3, was killed by a large rock thrown from an overpass in Temple, Texas. Photo courtesy Family photo / Google Maps

(CNN) -- With his girlfriend Keila seated next to him and her three children in the back, Christopher Rodriguez was driving on a cool, clear Saturday night.

The family of five had just visited Keila Ruby Flores's brother in Round Rock, Texas, and was headed north to Waco on Interstate 35. Without warning, a large rock from a railroad track overpass smashed into the vehicle's windshield and hit Flores.

"All of a sudden, something just strikes the window. It's an explosion," he told CNN affiliate KWTX. "I look over and I see Keila and she's just laying there unresponsive. I'm shaking her, trying to wake her up, (but) she was unresponsive."

Rodriguez pulled onto an access road, called police and began to perform CPR, but it wasn't enough. Flores, a 33-year-old mother of three, was rushed to a nearby hospital and died the next morning, Temple Police said.

Police say that someone threw the large rock and they are investigating the death as a homicide. Rodriguez told CNN he didn't see anyone on the overpass because of the dark, and police said they have no suspects.

Two days after her death, Rodriguez remembered Flores for her joy, perpetual smile and as a great mother.

"(She) worked very hard to provide for her three kids," he said. "She was (a) strong person who always got to the point and never beat around the bush. Always honest and (willing) to help where she could."

Rodriguez said he wanted to thank the good Samaritan who offered help immediately after the incident. The stranger got on the phone with the 911 dispatcher as Rodriguez performed CPR and helped Rodriguez stay calm, he said.

"When paramedics arrived that's when I noticed he was gone," he told CNN. "I didn't get his name and I never got to thank him for helping me in that time of need. I just want to thank that individual in person for helping me."