A San Antonio bakery raised more than $70,000 for Ukraine by donating all their proceeds for a weekend 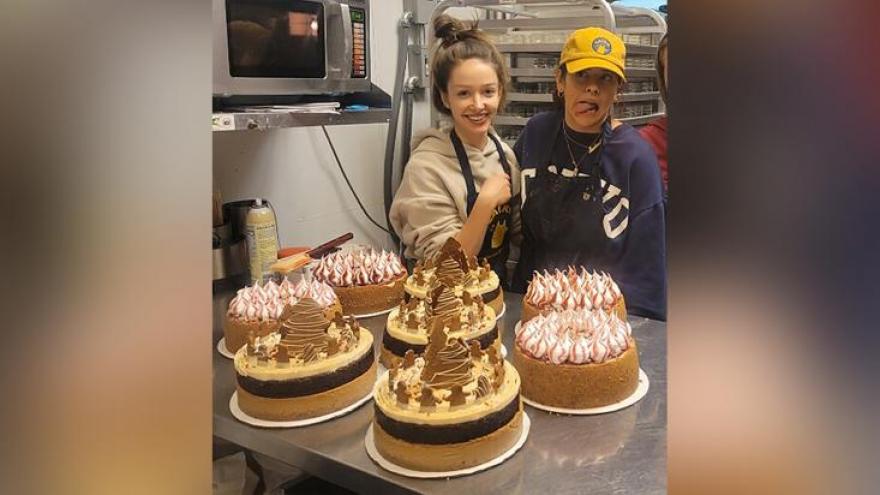 Laika Cheesecakes and Espresso business owner Anna Afanasieva with one of her team members and their cakes.

(CNN) -- A Ukrainian-owned bakery in Texas took a stance against the war by donating a weekend's worth of their sales to Ukraine.

Thousands of people in San Antonio stood in a line, which wrapped around several blocks, to enter Laika Cheesecakes and Espresso, where every dollar they spent went to the victims of the Russian invasion.

In just three days, from February 25-27, Ukrainian business owner Anna Afanasieva raised more than $72,400 for her country with the help of her Slovakian business partner Viktor Krizma.

"The idea to help came very naturally," Afanasieva, 28, told CNN. "What else could we do? We are here, not in Ukraine where we can bear arms and go fight the Russians. But we can at least sell cheesecakes and make something good out of it."

It was a Wednesday morning when Afanasieva was grocery shopping for her bakery store in a nearby supermarket where she received a call from her mother in Ukraine.

A large explosion was heard, her mother told her, but Afanasieva refused to believe it.

"I told her don't worry, it has to be the Ukrainian army doing military exercises," Afanasieva told CNN. "I was trying to calm her down because I didn't fully believe anything could really happen. It wasn't real."

But after checking social media, the young business owner realized how real the situation had become. Her beloved country, where she left behind friends and family and her most cherished memories, was under attack.

"They weren't there for cheesecakes, they were there to help"

If Afanasieva could have it her way, she says, she would join her people on the front lines of the war and fight until her country was free again.

But for now, she says, selling cakes is the most she can do to help.

"I'm as close to Ukraine as I could be, almost everyone I love is there. It's where I was born, it's where I grew up, so this is the worst possible thing that could ever happen to me," Afanasieva said. "I don't know how to put into words how much my heart is breaking. I'm detached from my life here in the US. Mentally, 100% of me is in Ukraine."

Afanasieva moved to the United States in 2013 for a student exchange program but stayed when she met her husband. She was born and raised in Odessa, Ukraine, which Russia is now preparing to bomb, Ukrainian President Volodymyr Zelensk announced Sunday.

During the coronavirus pandemic, she discovered her passion for baking. She dedicated every moment -- and every penny -- to learn how to make everything from cheesecakes to French pastries.

As she read book after book and spent hours on YouTube learning the intricacies of the art of baking, Afanasieva found herself spending day and night practicing.

"I was spending so much time baking, I was like I might as well start a bakery," she said.

Despite opening up in December 2020 during the pandemic, the local San Antonio community immediately supported her and helped keep the business afloat.

On February 24, Afanasieva posted on Laika Cheesecakes and Espresso's social media accounts, informing customers that the business would donate all their sales from the weekend.

The next day she says she arrived to work to find people had already lined up in anticipation for a cheesecake, or just a chance to help make a difference.

Within hours, those lines turned from hundreds to thousands, she says. Within four hours, they had sold out of everything, including cheesecakes and coffee.

"There was still a line of people who had been waiting for four hours, and I would go out and apologize and tell them we sold out, but they would still stand in line just so they could come to our doors and donate," Afanasieva said. "They weren't there for cheesecakes. They were really there to help."

By the end of the weekend, she discovered $25,000 of the money raised was only from donations, not sales. All the funds will be donated to a special account of the National Bank of Ukraine, which will go towards supporting the Armed Forces of Ukraine.

Afanasieva also wants to use a portion of the donations to purchase humanitarian help for citizens and the army once they figure out how to get items to Ukraine.

"It was so heartwarming. We never expected so many people. It felt like all of San Antonio showed up," Afanasieva said. "We were so grateful that so many people cared."

Laika Cheesecakes and Espresso is still accepting donations both in person at the bakery or online, and Afanasieva is urging other business owners to do the same.

"I want to encourage other businesses to at least try and create some sort of fundraiser where people can donate, because as we discovered there are tens of thousands of people who really want to help but don't know where to send their money to," she said.

"Especially Ukrainian owned businesses, they don't have to donate their sales, but at least they can accept donations," she said.