A school nurse quit over a scarcity of Covid-19 precautions 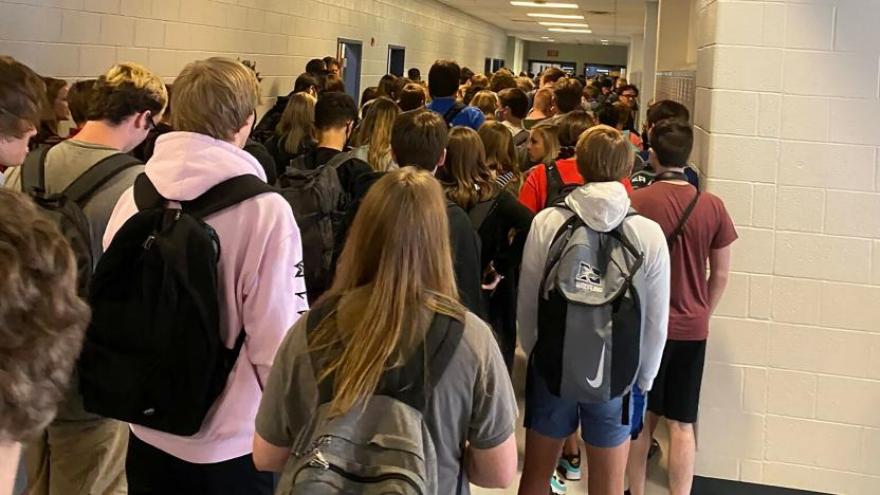 In this photo posted on Twitter, students crowd a hallway, Tuesday, Aug. 4, 2020, at North Paulding High School in Dallas, Ga. The Georgia high school student says she has been suspended for five days because of photos of crowded conditions that she provided to The Associated Press and other news organizations. Hannah Watters, a 15-year-old sophomore at North Paulding High School, says she and her family view the suspension as overly harsh and are appealing it.

(CNN) -- A school nurse in Georgia who quit over what she considers a lack of Covid-19 precautions said a viral photo of students crowded last week in a high school hallway and the positive coronavirus cases that followed validates her decision.

"I find it very heartbreaking, and it was obviously some sort of validation, but it was not the validation that I necessarily wanted to see," Amy Westmoreland told CNN on Monday.

A sophomore at North Paulding High School, north of Atlanta, captured the image of the throng of students, many without masks, as debates roiled nationally over whether in-person learning should resume as the pandemic continues. The school is closed at least through Tuesday after six students and three staff members tested positive.

When the Paulding County School Board came out with provisions for reopening, masks were optional, and Westmoreland decided she needed to make a choice, she told CNN Saturday.

"I love these children, I love my job," she said, "but I love them enough to take a stand."

National response to the photo and criticism of the scene it captured by Dr. Anthony Fauci, director of the National Institute of Allergy and Infectious Diseases, hopefully will motivate decision-makers to enact more safety measures, Westmoreland said.

The aunt of two students at the school who tested positive criticized school officials for starting in-person learning too soon and without enough precautions.

"I think a lot of parents trusted the school system that they would have a plan in place, and quite obviously they did not," Angie Franks told CNN on Monday.

Still, staff and students have been afraid to speak out, Westmoreland said.

"There's consequences if they do," she said.

Indeed, the student who snapped the hallway photo was suspended over the shot, though the punishment swiftly was lifted. Hannah Watters now hears about how other students deride her and threaten to hurt her, including saying they know where she lives, she told CNN on Monday.

Watters believes the anger from students comes from rumors she is trying to take away their senior year -- with prom, graduation and other meaningful moments -- but she has never wanted that, she said. She just wants the school to be safer so it can stay open, she said.

Everyone has to work together to stay safe and reach the common goal of opening back up, Franks said.

"Simply put on a mask, wear a mask and let's work together and get rid of this," she said. "We all want normalcy, and we aren't going to get it if we don't help ourselves.