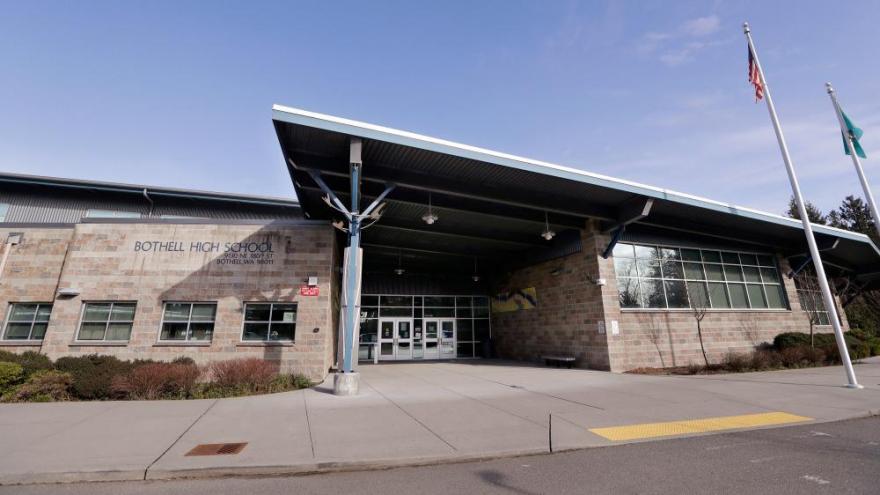 Bothell High School stands closed for the day on February 27.

(CNN) -- Bothell High School outside Seattle was closed for cleaning on Thursday and Friday after a staff member's relative was quarantined and tested for the novel coronavirus, school district officials said.

The closure -- which was "not necessary," according to public health officials with Seattle and King County -- was taken out of "an abundance of caution," the school district's superintendent said, even though the staff member was not tested.

"While today, our support services staff have been taking initial steps to disinfect the areas where the staff member traveled on the campus, we need more time to fully and completely disinfect the entire school as a preventive measure," Superintendent Michelle Reid said in a Wednesday letter to families.

The staff member returned to work Monday after a week traveling abroad, Reid's letter said. The employee said a family member he or she was traveling with fell ill Tuesday and was taken to the hospital. The family member is being "treated, monitored and quarantined," the letter said.

"At this time, there is no confirmation that the family member's illness is connected to the coronavirus outbreak," Reid's letter said, "but out of an abundance of caution, the family member is being tested."

The letter emphasized that the staff member was not the person tested for the coronavirus. The school district is reaching out to families of students who might have had contact with the staff member, the letter said.

"These steps are being taken out of an abundance of caution," Reid said.

District officials initially planned to limit the school closure to Thursday. But in a second letter Thursday night, Reid announced Bothell High School would be closed Friday and all evening activities on campus canceled.

Cleaning crews managed to disinfect "a large portion of the school" Thursday, Reid said, but more work needs to be done and officials are awaiting test results from the employee's family member.

"We recognize that Public Health Seattle & King County did not recommend closing Bothell High School as they believed the risk of the coronavirus exposure to students and staff is low," Reid's second letter said. "They shared with me that in the end, it was my call. Because I heard 'low risk' and not 'no risk,' I feel it is my responsibility to extend the closure through Friday."

In a statement, health officials in Seattle and King County made clear it did not recommend closing schools when there hasn't been a confirmed case among students or staff, but it said the decision was ultimately up to school authorities.

"Though this closure is not necessary from a public health point of view, we know that school districts act out of extra special caution when they are protecting children," health officials said in a news release. "And the school knows its community best and is in charge of making decisions about the school."

The risk of coronavirus to people of Washington remains low, the news release said.

But at least one parent is happy the school took the extra step. According to CNN affiliate KOMO, Jen Pirak, whose 16-year-old daughter goes to Bothell High School, was glad officials were making sure the school was safe.

"My gut reaction was, wow, this is really starting to affect our area now, not only our country but locally -- our area," she said. "I knew it was something that could happen but never thought it would be something at my daughter's school."

US Centers for Disease Control and Prevention officials said earlier this week that communities, including schools, should begin preparing for the possibility of "community spread" of the coronavirus, and with it, disruption to daily life.

Dr. Nancy Messonnier, director of the CDC's National Center for Immunization and Respiratory Diseases, told reporters Tuesday she called her own children's school district to find out what would happen if schools needed to close.

The CDC released a Morbidity and Mortality Weekly Report on Tuesday that said coronavirus "is not recognized to be spreading in US communities" -- though a new case reported in California Wednesday could be the first case of "community spread."

If "sustained transmission" is seen in the US, the report said, health officials will implement other strategies for prevention. Strategies like "staying home when ill and practicing respiratory and hand hygiene will become increasingly important," the report said.