A sheriff put down his baton to listen to protesters. They chanted 'walk with us,' so he did 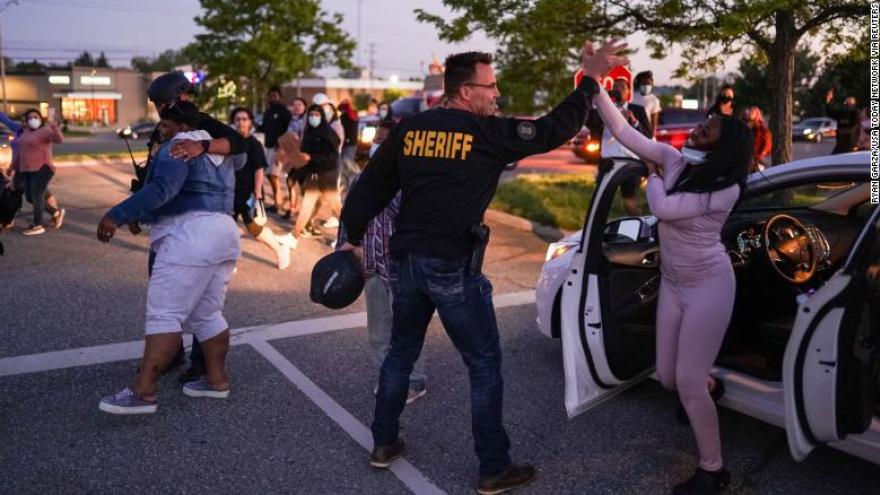 (CNN) -- A Michigan sheriff joined protesters in Flint Township on Saturday, putting down his weapon and saying, "I want to make this a parade, not a protest."

"The only reason we're here is to make sure that you got a voice -- that's it," Swanson said in video clips shown on Twitter.

"These cops love you -- that cop over there hugs people," he said, pointing to an officer.

He was speaking to the crowd protesting police brutality and the death of George Floyd in Minneapolis.

He smiled and high-fived people in the crowd, who responded by chanting, "walk with us!"

"Let's go, let's go," Swanson said as he and the cheering crowd proceeded. "Where do you want to walk? We'll walk all night."

Flint has drawn national attention for its water crisis, which began in 2014, when city and state officials switched the city's water supply to save money. It exposed residents to dangerously high levels of lead and resulted in more than a dozen lawsuits.

But Saturday's event offered a welcome contrast to violent confrontations in cities across the country.

"This is the correct response from police #WalkWithUs," Gwen Campbell tweeted.

JJ Milliken, another Swanson supporter, said via Twitter: "#WalkWithUs is how we change a system that murdered #GeorgeFloyd. It requires mindfulness of our actions and beliefs. Chris Swanson exemplifies the deputies and officers I know and respect. Community-first mentality and lead by example. This is a mindful action. This is change."

CNN is attempting to reach the Genesee County Sheriff's office for comment.

"I join with the chorus of citizens and law enforcement officials alike, calling for the swift arrest and prosecution of each police officer involved in this appalling crime," he wrote. "The actions we witnessed on that video destroy countless efforts to bolster community policing efforts across our nation, and erode trust that is painstakingly built."