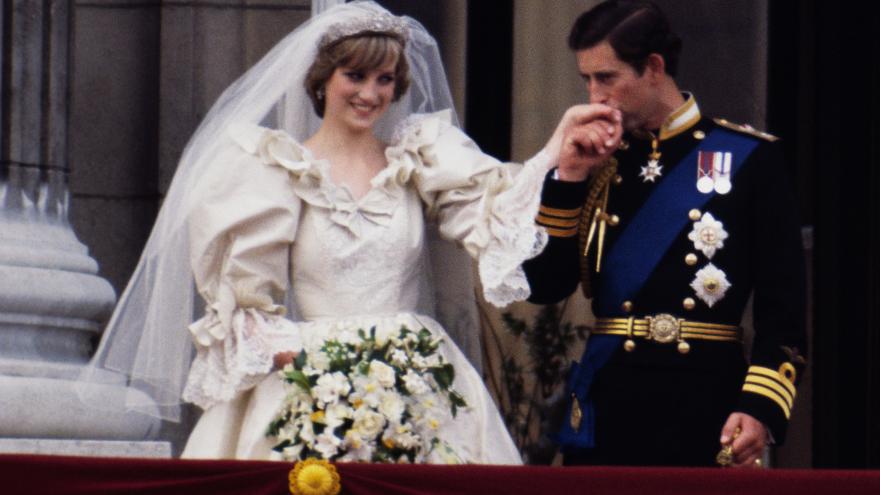 A slice of cake from Prince Charles and Princess Diana\'s 1981 wedding is going up for auction. - Terry Fincher/Princess Diana Archive/Getty Images

(CNN) --This may be the most expensive piece of cake you'll never eat.

A slice of cake from Prince Charles and Princess Diana's 1981 wedding is up for auction.

Weighing about 28 ounces, the slice comes from one of the 23 cakes made for the royal wedding, according to Dominic Winter Auctioneers. It features a coat-of-arms colored in gold, red, blue and silver, a silver horseshoe and leaf spray, as well as some white decorative icing.

The piece of cake was given to Moyra Smith, who worked at Clarence House for the Queen Mother, the auctioneer said, adding that this seemed to have been from one of the cakes sent to the staff.

The 40-year-old slice, which has been kept in plastic wrap in an old cake tin, was sold to Dominic Winter Auctioneers in 2008 on behalf of Smith's family.

The auctioneer said it "appears to be in exactly the same good condition as when originally sold, but we advise against eating it."

The listing also includes printed Ceremonial and Order of Service programs for the wedding, which had an estimated worldwide television audience of more than 700 million people. It also includes a memorial Royal Wedding Breakfast program.

This announcement comes just a few months after Princess Diana's sons agreed to loan her wedding dress to go on public display at Kensington Palace. A car Prince Charles gave Princess Diana as an engagement present also recently went up for auction, selling for more than £52,000 ($72,000).