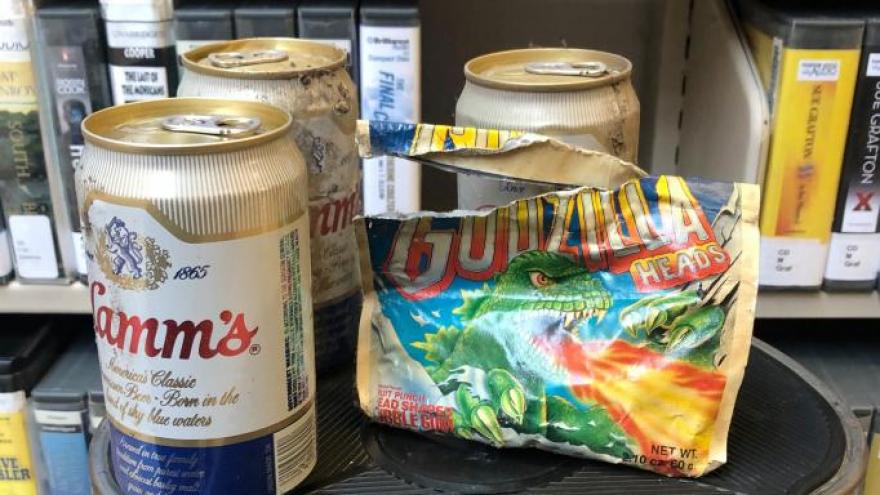 A stash of beer and gum dating back to the 1980s was found behind the shelves of a Washington library.

(CNN) -- It was a real whodunit when a stash of beer and gum from the 1980s was discovered behind the walls of the Mystery section at a Washington library.

Due to the outbreak of Covid-19, the Walla Walla Public Library has been closed to the public since March and has since taken the time to do some renovations, library director Erin Wells told CNN.

During the demolition three weeks ago, five full cans of Hamm's beer and an opened pack of Godzilla Heads gum was found in a disintegrated paper bag, Wells said. Facilities Maintenance Specialist, Luis Cuellar found the odd treasure when he removed a seven foot tall corner panel on some open top shelving believed to be original to the 1970s building.

"Someone had apparently taken a cue from 'Treasure Island' and stashed their booty behind the shelving," city officials wrote on Facebook.

With some packaging clues, such as a missing warning label required on beer after the late 80's, library staff calculated that the hidden stash had to have been there for at least 30 years.

"It looked like somebody had just stashed it there and maybe thought they could get it later ... but there was no way to get it out," Wells said.

"There were probably six beers that they bought and there was only five that we found so they might not have been thinking straight when they did it."

The Library Director found the discovery of the aging contraband to be "a bit of levity during a difficult time."

Wells says their library like many around the country are facing significant financial challenges due to Covid-19. Their operating budget has been frozen and the library is seeking donations from the public so they can continue purchasing library books.

This year marks the building's 50th anniversary, Wells said. And the unexpected find certainly made an interesting time capsule.