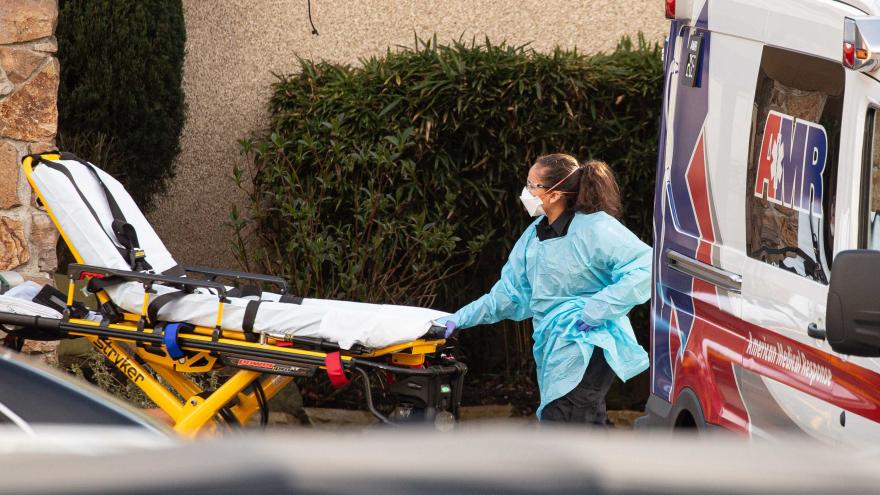 (CNN) -- State governments are working to contain the spread of the novel coronavirus in the US, as federal officials say more testing for the illness will likely see the number of known cases increase.

There were at least 445 cases and 19 deaths in the United States across 32 states and the District of Columbia as of Saturday evening. That national figure includes 375 people diagnosed through the US public health system and 70 people repatriated to the US -- 46 from the Diamond Princess cruise ship, 21 on the Grand Princess cruise ship and three from China.

Here are the reported cases in each state, not including those who were repatriated.

Two more residents of Pinal County have tested positive for coronavirus, the Arizona Department of Public Health said March 7. The patients live in the same household as another person who previously tested positive.

The state's third patient, a woman in her 40s from Pinal County, has been hospitalized in Maricopa County, said Dr. Cara Christ, the state's health services director, at a March 6 news conference provided to CNN by affiliate KPHO/ KTVK

One patient with coronavirus "has recovered and is no longer infected with the disease," she said March 2.

Six new cases were confirmed March 7 in San Francisco, bringing the total for the city to eight, according to Dr. Susan Philip of the San Francisco Department of Public Health.

One case was confirmed in a Madera County couple who had recently returned from a Princess Cruise, county health officials said in a March 7 news release. Both spouses remained isolated at home, and one developed symptoms. They went to Madera Community Hospital, where they avoided public areas, officials said.

Three infected patients were in Contra Costa County, including two people who had sailed previously on the Grand Princess ship, county health services officials announced March 6. The third patient had close contact with a patient in another jurisdiction.

The state reported its first death March 4: a Placer County resident who officials said probably contracted the virus on a Grand Princess cruise between February 11 to 21 from San Francisco to Mexico.

The first presumptive positive coronavirus case has appeared in Washington, DC, according to a March 7 news release from the office of the mayor.

Two people have died, marking the first deaths outside California and Washington state, the state Department of Health said in a March 6 news release.

Both who died recently had taken international trips, officials said. They were a person in their 70s in Lee County and someone in Santa Rosa County.

Four more cases were confirmed on March 7, according to the Georgia Department of Public Health. All four cases are in the metro Atlanta area. Two of the cases involved travel to Italy and the source of exposure is unknown in the other two cases, the department said.

The state's third case was a 46-year-old Polk County woman who tested positive on March 5, the health department said. The woman had arrived with symptoms at a Rome, Georgia, hospital on February 29, but was treated and released without being tested for coronavirus because she didn't meet testing criteria at the time, the department said. She returned to the same hospital March 3 after symptoms worsened and was admitted and placed in isolation.

A Hawaii resident who traveled on a cruise ship that's been linked to more than two dozen coronavirus cases tested positive for the virus, Gov. David Ige said March 6. The resident traveled on the Grand Princess in early February and returned home to the islands, he said.

The patient "acquired the infection while in Italy and is hospitalized at Rush University Medical Center in isolation," according to the statement.

The state's first case is a woman under the age of 50 from Johnson County, the governor's office said March 7.

A person in Lexington was being treated in isolation, Gov. Andy Beshear said March 6.

The patients were a married couple in their 70s and a woman in her 50s. The three were on the same group trip overseas in late February, officials said, without specifying where they traveled.

Among them: a woman in her 60s who lives in Middlesex County and had recently traveled to northern Italy, officials said March 5.

Another case announced in March was a woman in her 20s who recently traveled to Italy on a school trip.

An older adult resident of Ramsey County who recently traveled on a cruise ship with a known coronavirus case was in isolation at home, the state Department of Public Health said March 6.

The first presumptive positive case of coronavirus has been identified in the state of Missouri, according to a March 7 press release from Gov. Mike Parson.

The patient is a woman in her 30s from Douglas County who returned from England at the end of February, Gov. Pete Ricketts said in a March 6 news release. She started experiencing symptoms and was hospitalized at Methodist Hospital on March 5. A coronavirus test came back positive March 6. She was to be transferred to the Biocontainment Unit at the University of Nebraska Medical Center.

Nevada reported two cases on March 5. The Washoe County Health District said a male resident in his 50s received a presumptive positive case of coronavirus. The man is linked to the Grand Princess cruise ship outbreak and his condition is stable and he is self-isolating at home, the district said.

The second person had contact with the first, officials said. Both were in home isolation.

A man in his 50s has been hospitalized at Englewood Hospital and Medical Center in Bergen County since March 5, the governor's office said March 6.

The number of confirmed cases continues to grow, with most of them in Westchester County, Gov. Andrew Cuomo said March 7. New York City was home to 11 cases and 70 in Westchester.

Health officials in Westchester County previously ordered a synagogue in New Rochelle to halt services over fears a man who tested positive for the virus may have exposed others.

Some Westchester County cases were connected to an attorney there, Cuomo said, including the attorney, his wife, son, daughter and neighbor.

A Chatham County man tested positive after traveling in Italy in late February, the state's health department said March 6. That person was sick in Italy and flew back to the United States after his fever resolved.

A Wake County resident tested positive for the virus after visiting a Washington state facility with a coronavirus outbreak, officials said March 3.

A man in his 50s who recently traveled to Italy is in isolation at his Tulsa County home, Gov. Kevin Stitt said on March 6, adding there is no sign of community spread in the state.

Four new presumptive positive cases were identified among residents in Jackson, Klamath and Washington counties, the Oregon Health Authority announced March 7. Three cases were travel-related; one patient had contact with a known patient.

A presumptive case of community transmission was reported in Umatilla County, officials said.

Two new cases were announced March 7 by Gov. Tom Wolf. "Both individuals are from Montgomery County, have mild symptoms, are in isolation at home and were exposed to an area of the United States where COVID-19 is present," Wolf said in a press release.

Two cases were announced March 6. One was an adult in Wayne County who'd traveled to a country where coronavirus was present, Wolf said. That person was in isolation at home.

The other patient was an adult in Delaware County and was in isolation at home. That person had recently traveled to a place in the United States where the virus was present, Wolf said.

A 60-year-old women with mild symptoms was a presumptive case, the state Department of Health said March 6.

Two others from a group that had traveled on a school trip to Italy in mid-February tested positive, the health department said March 1. They were a man in his 40s and a teenager. Health officials were monitoring the 38 people who went on the trip.

One patient is an elderly woman from Kershaw County who has been hospitalized and isolated, the state Department of Health and Environmental Control said March 6.

A second patient is a woman from Charleston County who recently traveled to France and Italy. The patient did not require hospitalization and self-isolated at home.

The man had a recent history of out-of-state travel and had returned home in the prior four to five days, Piercey said. His travel itinerary was unclear. The patient was isolated at home with mild symptoms.

Two cases were announced in Fort Bend on March 6.

The patient is believed to have been exposed to the virus while on a recent cruise on the Grand Princess cruise ship. The patient, who is older than 60, is recovering at home and is under a Davis County-issued isolation order.

Vermont confirmed its first presumptive positive case of coronavirus, according to a March 7 press release from the state health department. The adult patient is hospitalized and health officials are investigating the person's travel and possible exposure history, according to the release.

A US Marine assigned to Fort Belvoir in Virginia tested positive for coronavirus on March 7 and is in the Fort Belvoir Community Hospital, according to the Defense Department. The Marine recently returned from overseas where he was on official business.

Twelve patients at Evergreen Health's medical center outside Seattle have died after testing positive for coronavirus, the company said. The latest death was announced March 6.

County health officials have also identified two individuals who died in other locations — a woman in her 80s who died at home and a man in his 50s who died at Harborview Medical Center.

Of the state's coronavirus cases, 71 were in King County and 27 in Snohomish County, according to the Department of Health. Five other counties have one case each.

Fifteen deaths occurred in King County and one in Snohomish County, the health department said.

An adult with a history of travel to Beijing tested positive, the Wisconsin Department of Health Services said February 5.

That person was isolated and doing well, the department said.

CORRECTION: This story has been updated to reflect the correct number of cases from people repatriated from the Diamond Princess cruise ship.