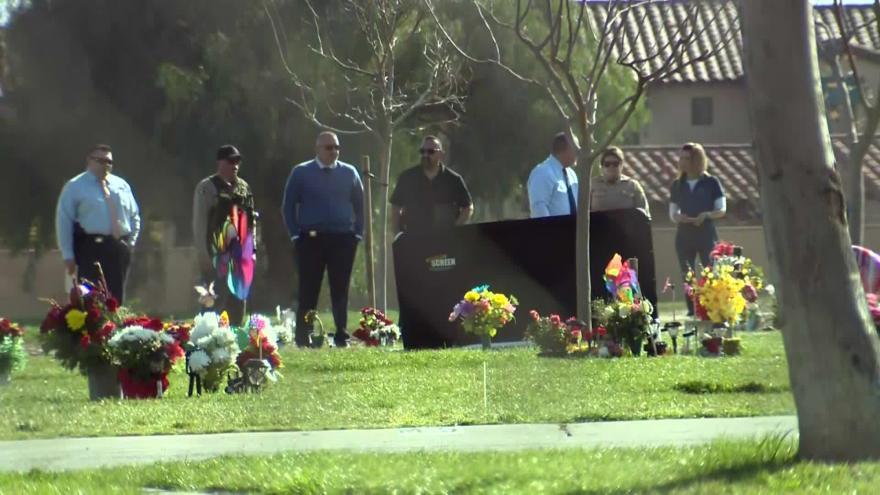 The bodies of three men found dead near a cemetery in Southern California have been identified, the Riverside County Sheriff's Department said.

(CNN) -- Authorities in Southern California issued an arrest warrant Thursday for a man in the killing of three men who were found at a cemetery earlier this week.

Authorities are searching for the suspect, who is also wanted on unrelated misdemeanor warrants in Riverside and San Mateo counties, the sheriff's department said.

All three were residents of Perris, Sheriff Chad Bianco said at a news conference Tuesday.

Authorities have previously said investigators were looking into reports that the deaths might be gang or cartel related.

"Three people killed at the same time, that was a message for something," Bianco said. "It's certainly not the norm." The sheriff did not say how the men were killed, but said police are looking into why the men were there and who was with them.

Riverside County Sheriff's deputies responded to a report of three unresponsive males on the ground at the cemetery Monday. When they arrived, they found the deceased men, according to an earlier news release.

The incident appears to be isolated, Bianco said.

"This is not a matter of public safety," Bianco said. "The concern specifically over social media was that we are having a rash of homicides in Perris and that they are somehow related and I am here to tell you they are not."

"To dispel any rumors, we do not have a serial killer on the loose," he said.

Bianco did address a recent increase in crime in Perris.

"It's no secret that crimes with drugs are going up. Across the state, crimes involving drugs and gangs are going up and it's completely related to the horrible laws that are being passed and the horrible propositions that were voted in and now we're suffering the consequences for that," Bianco said.