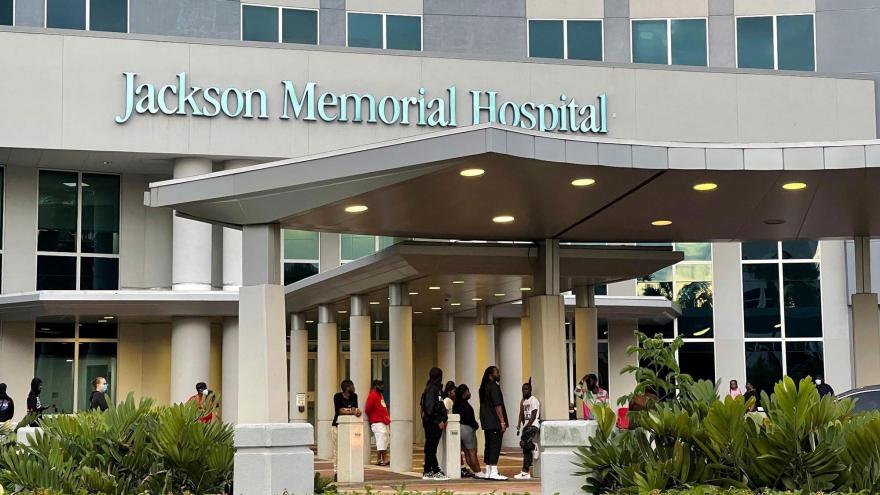 Some of the shooting victims' loved ones wait outside the Ryder Trauma Center at Jackson Memorial Hospital in Miami on Sunday.

(CNN) -- Miami-Dade Police released surveillance video that shows three masked suspects who they say opened fire at a crowd outside a concert venue in southern Florida on Sunday, leaving three people dead and at least 20 others wounded.

The shooting stemmed from an ongoing rivalry between two different groups, Miami-Dade Homicide Bureau Maj. Jorge Aguiar said Monday. The intended target was believed to have been standing in front of the concert venue when the shooting began, he said.

Police have not detailed the identities of the shooters or victims in what is one of the largest mass shootings in Miami-Dade County's history. There have been 41 homicides in the county this year, as of May 23, the same amount as at this point in 2020, according to Miami-Dade Police Department data.

Here's what we know about the shooting:

Shooters fired into a crowd

That's when three people "stepped out of the vehicle with assault rifles and handguns and started firing indiscriminately into the crowd," Ramirez said.

Several others in the parking lot then armed themselves and opened fire toward the initial shooters, Aguiar said. The end result was an extensive crime scene with initially two dead and 21 others wounded, including three with critical injuries, according to a police statement.

In a tweet, Miami-Dade County Police Director Alfredo "Freddy" Ramirez III said, "I am saddened to report that a third victim did not survive her injuries. No family should have to suffer such loss. We are working around the clock relentlessly to bring these killers to justice."

Surveillance video released by police shows the white vehicle come to a stop in an alley near the venue. Three armed people, all dressed in black, wearing face coverings and with their hoods over their heads, then exit the car and run off-screen. Less than 10 seconds later, the video shows them run back to the vehicle and hop in as the driver quickly leaves the scene.

Ramirez said Sunday the shooting at the club was "targeted" and was "definitely not random."

The Pathfinder had been waiting in the parking lot for 20 to 40 minutes before the shooting, he said Monday.

Investigators found the Pathfinder submerged in a canal Monday afternoon, police said. The vehicle was reported stolen on May 15.

TV personality and Camping World CEO Marcus Lemonis is offering a $100,000 reward for information leading to the arrest and conviction of those responsible for the shooting, the businessman tweeted Sunday.

In addition, Crime Stoppers Miami-Dade and the Keys and the US Bureau of Alcohol, Tobacco, Firearms and Explosives (ATF) added $30,000 to the reward, bringing it to $130,000.

All of the people injured in the shooting were identified as Black and ranged in age from 17 to 32, according to a police news release.

Two of the people killed were both 26-year-old men, police said. Of those injured, three are in critical condition, three have been discharged and the rest remain hospitalized.

Additional details of the third victim killed, a woman, have yet to be released.

Dillard, 26, had a 2-year-old son, according to his grandmother. She told CNN that family members had tried repeatedly to call Dillard on Sunday and tried to looked for him at area hospitals. Later that afternoon, several members of the extended family spent several hours at the shooting scene.

His father, Clayton Dillard Jr., interrupted Monday's news conference at Miami-Dade Police headquarters, shouting a message to those responsible: "You all killed my kid! You must burn!"

Though Miami-Dade Police would not provide names, Aguiar confirmed that the man who interrupted the news conference is the father of one of the deceased victims.

The banquet hall and billiards club had been rented out for a concert Saturday night, Ramirez said. A Facebook page for the establishment shows it hosts parties and happy hour events as well.

Aguiar called this weekend's shooting a senseless act of violence.

"For you guys out there -- if you are watching this and you are responsible for this -- look at those victims that you don't take into account, those victims are hurting, they're destroyed, their lives are turned upside down," he said.

On Tuesday, Ramirez told CNN's Victor Blackwell that the investigation into the shooting is very active. The department is working around the clock and receiving fruitful tips from the community, he said.

Police are still processing the SUV that was found Monday in the canal and looking for three suspects in connection with the shooting.

"We are looking for three killers. Three murderers that killed two innocent people and wounded several others and destroyed the families of those victims, that's what I'm looking for," Ramirez said.

Police have previously said the shooting had to do with rivalry between two groups. When asked about the groups, Ramirez called them "fake gangs."

"These are social media vendettas linked in with the flavor of gangs, but they aren't real gangs. They are wannabees," he said. "We have zero tolerance right now for the small percentage of people who are responsible for the violence we are seeing in our community, which is very similar to what we are seeing around the country, and it's gotta stop."