A teen wanted to auction off a pig for a cancer charity. Buyers kept returning it so he could sell it over and over. 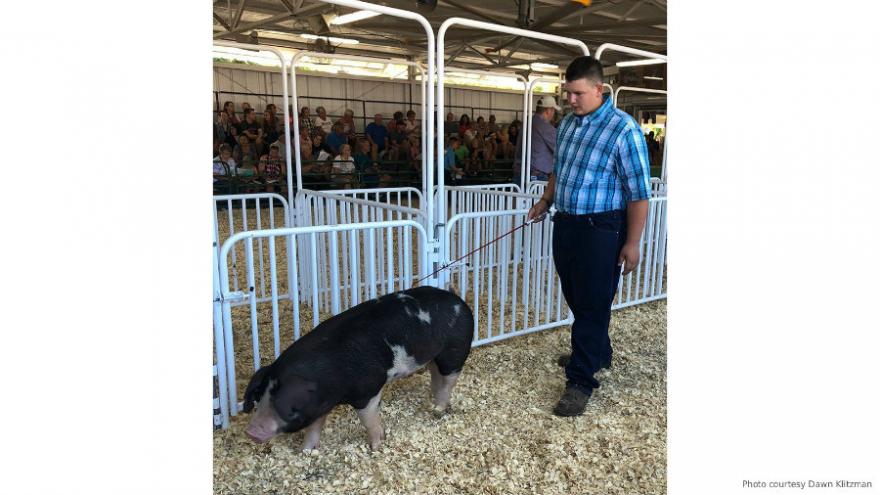 (CNN) -- The auction took place on a mild Wisconsin morning. Yet, standing in front of an expectant crowd, 15-year-old Waylon Klitzman was sweating.

"I was nervous," he told CNN. "I'm not that guy that talks to a lot of people. I'm not really a very good social guy."

He self-consciously hoisted a sign with his hog's picture as an auctioneer shouted a gibbering flow of syllables only seasoned livestock bidders understand.

Waylon called his hog "Roo." The farm boy was not sentimental about the animal he raised. But he cared deeply about his favorite teacher and hoped the money from Roo's sale would help her family fight cancer.

It defies logic. It's not traditional agribusiness; it's traditional Middle-American goodwill.

Waylon's mom, Dawn Klitzman, describes her son as a "pretty easy teenager." He plays football, works in the family's small farm and helps around the house. He's been involved with the local 4-H Club for five years and loves his animals.

4-H gives kids the chance to raise and sell their own livestock, earn their agricultural chops and make some money.

"It takes a commitment to take care of the pigs," Waylon said. "And I just love it."

School, however, is a different kind of beast.

"Being around a lot of people is difficult for him," she said. "He gets nervous. Not super-social. He has a group of friends but he's okay if he's by himself."

In those first weeks of school, Waylon relied on his algebra teacher, Kim Katzenmeyer, for support .

"He is a gentle giant. A big teddy bear," Katzenmeyer said of her former student. "I wish there were a million more Waylons."

Their special bond grew over the last school year.

"I'm not really a 'people person' and she just made me feel comfortable," Waylon said. "She saw the best in me and we just connected that way."

Katzenmeyer always told her students, the only thing that could tear her away from the school she loved, was her own family.

In 2017, her niece Harlow was diagnosed with neuroblastoma, a rare cancer that mostly affects children. Harlow was about to turn 4.

"We took her to Chuck E. Cheese's for a few hours and then had to go back to the hospital," recalled Katzenmeyer. "It rocked our world. We were all numb. That's why I felt we had to do something."

When she delivered the news to her students, at least one was heartbroken.

Katzenmeyer remembered the morning Waylon walked into her classroom and left a wad of crumpled cash on her desk. It totalled $52 and was meant as donation to her charity, he told her.

"He thought it was enough for me to stay," she said. "It breaks my heart."

The money was all Waylon had left from the sale of his 4-H pigs that year. It wasn't enough to make his favorite teacher stay, but it was the seed of a bigger idea.

"After I gave her the $52, I got to know Harlow's big family better. They're really nice people," said Waylon.

That brings us to the Rock County 4-H Fair, the livestock auction and Waylon nervously holding up a sign with Roo the hog's picture and the frenetic droning of an auctioneer.

Dan Drozdowicz has been attending the fair and auction for over 40 years.

"Because of the amount of meat that we purchase, the 4-H kids send us letters telling us about their animals," the local business owner said.

One letter, partly hand-written in Waylon's sharp strokes, explained the teen's desire to sell his pig and donate the profits to Beat NB. The note described the beloved 9th grade teacher Katzenmeyer whose niece is battling cancer.

"It struck a personal note," said Drozdowwicz. "I have a soon-to-be 4-year-old daughter myself. And I have an older sister diagnosed with cancer."

On auction day, Drozdowicz was ready to walk away with Waylon's pig.

"The bidding escalated pretty quickly to the $9 per pound range. A gentleman standing next to me was bidding against me, and at that point it was just the two of us."

At around $10 per pound, Roo's price surpassed the fair's grand champion pig, a barrow named Cheeky.

"I told him, 'Let me get the highest bid and I will turn around and give the pig back for sale a second time and you can bid on it,'" recalled Drozdowicz.

Looking relieved, Waylon turned over his sign where a "Thank you! #HarlowStrong" was written in white letters.

When the auctioneer finalized the sale, Drozdowicz told him to "turn around and sell that pig again."

Drozdowicz bidding rival Owen won the next round. He paid $2,716 for Roo before giving the hog back to the auction.

Next, Moll Construction, where Waylon's dad works, paid $2,915. Finally, a fourth bidder representing a group of local businesses, including a pork-producing company, won the final bid at $1,457.

Waylon had thought that, with luck, his hog would bring in just over $600.

"This is Middle America doing what we do," said Drozdowicz with a hint of pride in his voice. "We give back to the community wherever we can. We are blessed to be able to be doing what we do."

With no more pigs to sell, Waylon turned to his 3-acre pumpkin patch.

"When I was tilling it, I thought, I want to put it to a good cause," he said.

Waylon will be selling his pumpkins at his school's homecoming in September.

"There is a waiting list for his pumpkins!" said Katzenmeyer.

Waylon doesn't know how much money his pumpkins will bring. For him, it's not about any particular amount, his mother says.

"I want to do something where I can help people," he says, "This has really stuck with me."