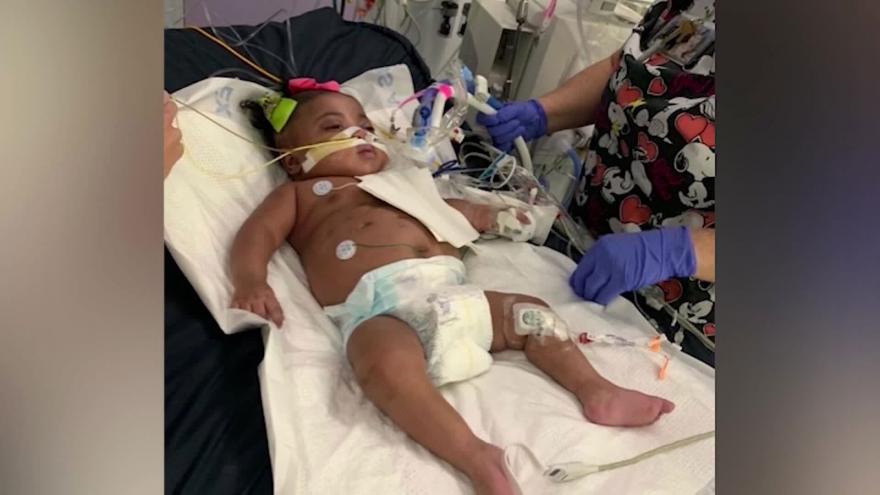 (CNN) -- A judge has decided that a Texas children's hospital can remove an 11-month-old with a rare heart defect off life support despite her family's wishes.

For several months, the family of Tinslee Lewis has been fighting to continue her treatment at the Cook Children's Medical Center in Fort Worth, Texas after the facility planned to end care.

Tinslee was born with a rare heart defect called Ebstein's anomaly and suffers from chronic lung disease and severe chronic pulmonary hypertension. The hospital planned to remove her from life-support after her physicians said she is suffering and her condition is irreversible, Cook Children's Health Care System spokeswoman Winifred King had said in a statement.

On Thursday, Judge Sandee B. Marion of the Texas Fourth Court of Appeals denied a temporary injunction filed by Tinslee's family in an effort to keep her on life support for several weeks.

Kim Brown, a hospital spokeswoman, told CNN the hospital won't take any action for up to seven days to give the family time to decide on whether to appeal the judge's ruling.

"Today's decision from Chief Justice Sandee B. Marion restores the ability of the Cook Children's medical staff to make the most compassionate and medically appropriate decisions for Tinslee as she struggles in pain to survive each day," the hospital said in a statement on Thursday. "This is an emotional and difficult situation for everyone involved, especially for this family who had high hopes that Tinslee would get better."

Trinity Lewis, Tinslee's mother, issued a statement through Texas Right to Life, an anti-abortion group, in response to the judge's ruling.

"I am heartbroken over today's decision because the judge basically said Tinslee's life is NOT worth living. I feel frustrated because anyone in that courtroom would want more time just like I do if Tinslee were their baby. I hope that we can keep fighting through an appeal to protect Tinslee. She deserves the right to live. Please keep praying for Tinslee and thank you for supporting us during this difficult time."

Texas Governor Greg Abbott and Texas Attorney General Ken Paxton said they will continue supporting the family as they exhaust "all legal options to ensure that Tinslee is given every chance at life."

"The Attorney General's office will be supporting an appeal of this case to the Second Court of Appeals. The State of Texas is fully prepared to continue its support of Ms. Lewis in the Supreme Court if necessary. We are working diligently to do all we can to ensure that Tinslee and her family are provided the care and support that they seek," Abbott and Paxton said in a joint statement.

'She is in pain every single day,' hospital says

Marion found that there was a reasonable expectation that the family could find a physician to take over her treatment and extended the temporary restraining order that would continue her care at the hospital, CNN affiliate KTVT reported.

Cook Children's has reached out to nearly 20 facilities from Los Angeles to Philadelphia to see if another hospital would take over the infant's care. But they all agreed with Cook Children's assessment of her condition and said there was nothing more they could do, said King, the hospital spokeswoman.

"Tinslee is suffering and she is in pain every single day. We know that this is very difficult for this family who had high hopes that she would get better. But the truth is that she is not going to get better," King told reporters on Thursday.

The baby girl consistently takes painkillers and sedatives, and she is paralyzed at all times. The hospital had said doctors had to sedate and paralyze the infant to keep her from pulling at the lines connected to her ventilator.

She is suffering from severe sepsis and appears that she's in pain when nurses change her diapers and turn her over to avoid bed sores, King said.

"All the things we have to do to keep her alive and keep her well is causing her pain and causing her suffering and we don't want to do that any longer. We want to ease her pain. We believe that we can do that if we allow her to naturally and peacefully transition," King said.