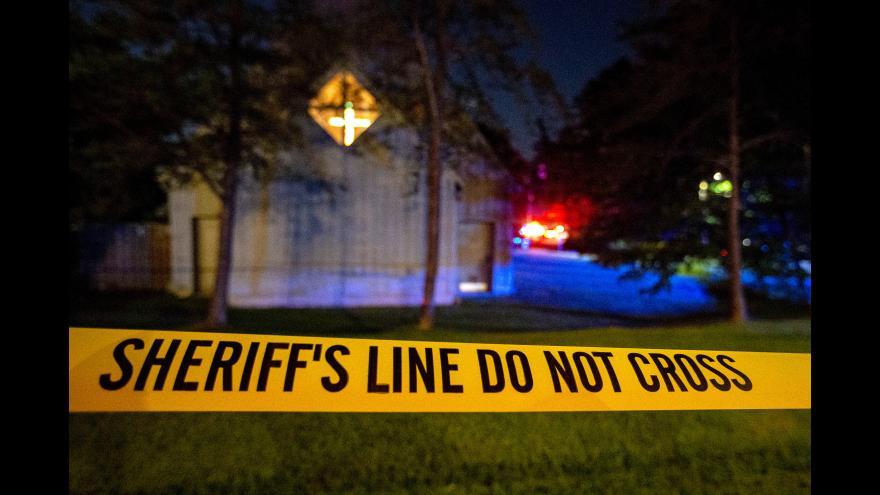 A 71-year-old man arrested on suspicion of fatally shooting two parishioners and injuring another at an Alabama church small-group meeting on June 16 was subdued and held down by an attendee of that meeting, police said.

(CNN) -- A 70-year-old man who shot dead three senior citizens at an Alabama church group's meeting Thursday evening was subdued by someone else at the event until police arrived, authorities said Friday.

The suspect, who is in custody, shot dead Walter Rainey, 84, and Sarah Yeager, 75, during a small group's potluck dinner at St. Stephen's Episcopal Church in Vestavia Hills outside Birmingham, police said.

The third gunshot victim, an 84-year-old woman whose family requested her name be withheld, died Friday at a hospital, Vestavia Hills police said.

The suspect, identified Friday evening as Robert Findlay Smith, had occasionally attended the church and was at the dinner there when he pulled out a handgun and started firing, according to Ware.

Someone at the event "subdued the suspect and held him down until law enforcement arrived," said Ware, who said police were called at 6:22 p.m.

"The person that subdued him is a hero," Ware said.

The office of the Jefferson County District Attorney said Friday evening warrants were issued against Smith for the capital murder of two or more persons. He is being held without bail in county jail. CNN has been unable to determine if Smith has an attorney.

Investigators believe the suspect acted alone, and they are trying to determine the motive, Ware said.

The shooting is the latest in a US house of worship and came on the eve of Friday's seventh anniversary of the massacre at Emanuel African Methodist Episcopal Church in Charleston, South Carolina.

A deadly mass shooting last month at a Taiwanese church service in Southern California -- along with mass shootings at an elementary school in Texas and a New York supermarket -- have drawn more political attention to gun violence. A bipartisan group of senators has announced an agreement in principle for gun safety legislation which would address mental health resources, school safety and access to firearms.

'Pillars of our community,' rector says of three victims

Thursday's attack happened during a gathering of the church's "Boomers" group, and the three victims were parishioners, the Rev. John Burruss said in a letter to the church community.

"These are the pillars of our community, and I cannot begin to fathom how painful this is for our entire church, and the larger community," Burruss, the church's rector, wrote.

A prayer vigil was scheduled for late Friday morning at nearby Saint Luke's Episcopal Church.

Former Sen. Doug Jones lives in the neighborhood where the church is situated. The shooting is stunning and tragic, he told CNN's Nadia Romero on Friday.

"It goes to show that no community is immune from this kind of gun violence that we see playing out across the country. No one is immune," said Jones, a Democrat who represented Alabama from January 2018 to January 2021.

"It was heartbreaking ... to have been at activities at this church. We've lived in this neighborhood ... 27 years now, and it is just something that really hits home to everybody," he said.

The community needs to be lifted in healing through prayer and unity, the Rev. Kelley Hudlow, missioner for clergy formation for the Episcopal Diocese of Alabama, told CNN affiliate WVTM.

"We are praying for healing and safety for all those who have been impacted and affected, and also knowing this is a traumatic thing that has happened to our community, not just our church, but this community here," Hudlow said. "What we need is for this community to do what it's really good at, which is coming together to take of each other."

On Thursday night, church members stood in a circle, holding hands, and prayed in a nearby parking lot, with several looking upset, CNN affiliate WBRC reported.

"I am glad to hear the shooter is in custody," Ivey said. "This should never happen -- in a church, in a store, in the city, or anywhere. We continue to closely monitor the situation."