A tiger went on an 800-mile odyssey in search of food, a mate and a place to call home 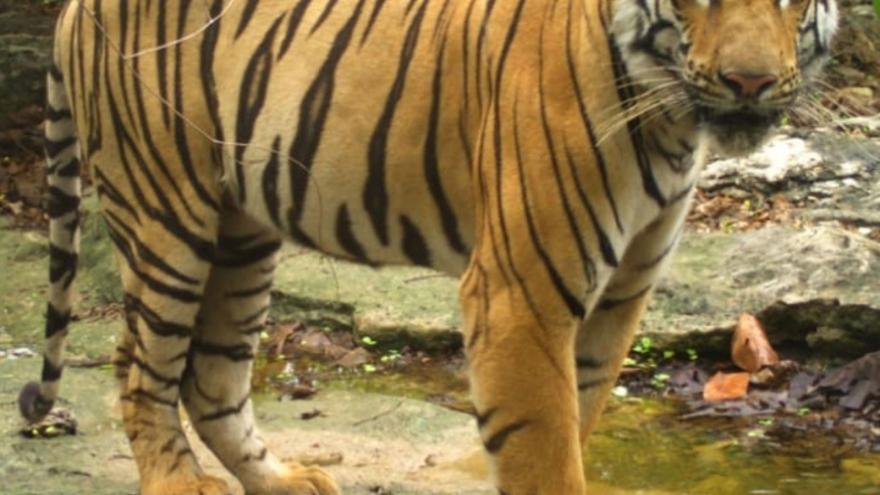 (CNN) -- A tiger in India traveled more than 800 miles (1,300 kilometers) in search of a mate -- the longest such walk ever recorded by a big cat in India, according to researchers.

The five-month-long odyssey saw the tiger, dubbed T1-C1 by scientists, criss-cross through forests and populated urban areas before eventually settling in a nature reserve.

Male tigers migrate as a part of a natural process of marking their territory in order to find a habitat where they can assert their dominance, moving away from their place of origin, which is already densely populated with tigers.

Two-and-half-year-old T1-C1 was one of three cubs born to a tiger named TWLS-T1 in 2016. A satellite radio collar was placed on all three in February 2019, as a part of a study to monitor the dispersal pattern of young tigers.

The tiger began its migration in late June from the Tipeshwar Wildlife Sanctuary in the western state of Maharashtra. An adult male tiger dominated the sanctuary and T1-C1 went in search of food and a potential mate.

"The primary concern is a thriving prey base, however, it is also important find a mate and there were no female tigers that he could mate with at Tipeshwar sanctuary," said RavikiranGovekar, field director with the Maharashtra state forest department.

The tiger crossed between the southern state of Telangana and back to Maharashtra several times, feeding on cattle and wild animals, such as antelope, along the way. It then made its way to the Dnyanganga Wildlife Sanctuary in Maharashtra, approximately 186 miles (300 kilometers) northwest of where its journey began.

The tracking collar has been active for nine months and will be removed from the tiger once its battery is completely drained. T1-C1 is currently being monitored by officials at the Dnyanganga sanctuary.

"A tiger's behavior is unpredictable but we are keeping track of it," said Vishal Mali, a divisional forest officer at the sanctuary. "The region has sufficient natural resources and prey for the tiger to sustain itself and it might decide to settle there permanently."

Tigers are an endangered species and fewer than 4,000 remain on Earth, according to the World Wildlife Fund. Several thousand tigers live in reservations in India, where killing one can result in jail time.

The department began tracking migration routes in 2016, but this is the first time that more than half of a tiger's journey was through populated areas, as T1-C1 passed through 11 villages.

"Once it entered the agricultural region, it could not come out and since it could sustain itself by killing (farmers') cattle and was moving along a stream, it kept moving forward," Govekar said.

The friction between man and beast was starkly illustrated when one villager disturbed the tiger and had a lucky escape.

"There was only one incident where it pawed a local, but I would not say that that was the tiger's fault; they were coming to take a selfie or something," Govekar said. The villagermade a full recovery, added Govekar.

According to the Forest Survey of India from the Ministry of Environment, Forest and Climate Change, the country gained 2,617 square miles (6,778 square kilometers) of forest cover between 2015 and 2017, when the latest forest assessment took place.

Meanwhile, India's tiger population has increased by almost a third in the past four years to almost 3,000 animals, according to a national survey released this July.

There were 2,967 tigers in the country in 2018, according to the National Tiger Conservation Authority (NTCA), which performs the survey.

This represents a 33% increase compared to the last survey in 2014, according to a statement from the NTCA, and continues population growth that has been observed since 2006.