A 'tip war' between alums of two colleges has raised more than $34,000 for restaurant workers in Cincinnati 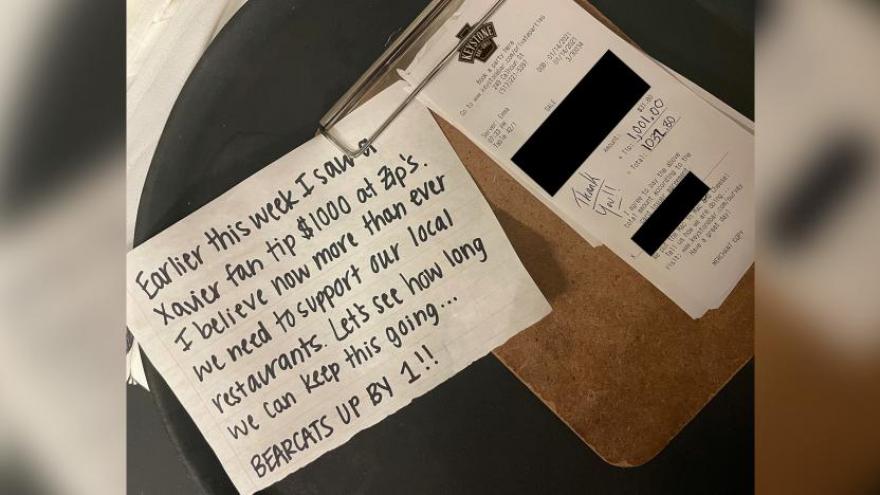 A University of Cincinnati fan left a $1,001 tip at Keystone Bar and Grill along with a note encouraging others to keep the "tip war" going. Portions of this image have been obscured by the restaurant.

(CNN) -- They say friendly competition is a good thing. But when the competition turns into thousands of dollars raised for a good cause -- it's a great thing.

Last month, a "tip war" broke out in Cincinnati, Ohio, between alumni and fans of two rival universities. Fans of Xavier University and the University of Cincinnati were topping each other's generous tips at local restaurants and in just one month, more than $34,000 has been raised to support restaurant workers in Cincinnati hurt by the pandemic, according to Zip's Café owner Mike Burke.

It all started at Zip's Café in early January when a Xavier alumnus visiting the school with his daughter left a $1,000 tip on a $54 bill along with a note for his fellow Xavier alumni server.

"Please share this tip with all of your employees as they work so hard and are dealing with COVID. Go Xavier!" the man wrote.

After the restaurant shared a photo of the kind gesture on social media, two University of Cincinnati fans left a $1,001 tip and a note at Keystone Bar & Grill -- just six miles from Zip's Café.

"Earlier this week I saw a Xavier fan tip $1,000 at Zip's," the rivaling note read. "I believe now more than ever we need to support our local restaurants. Let's see how long we can keep this going ... Bearcats up by 1!!"

The patrons, who wished to remain anonymous, asked that the bar post a photo of the large tip on social media "not for recognition, but to inspire others to do the same for those in the service industry," Keystone wrote in a message they happily posted to their Facebook.

"It's your turn, Xavier fans!" the post read. "Who will be one-upping the Bearcats by leaving a $1,002 tip at your favorite local bar or restaurant?"

In the weeks since, generous patrons participating in the "tip war" have garnered more than $34,000 in tips for restaurant workers all over Cincinnati.

"Xavier and UC happen to be three miles apart which makes it one of the closest rivalries in college sports," Zip's Café owner Mike Burke told CNN. "I think the proximity has definitely helped drive the traction on this very generous, feel good movement."

Around 110,000 restaurants across the country, or 17% of the total number of restaurants, are permanently closed or experiencing long-term closures, according to the National Restaurant Association.

In just one month, employment in food services and drinking places declined by 372,000, according to data released last month by the Bureau of Labor Statistics (BLS).