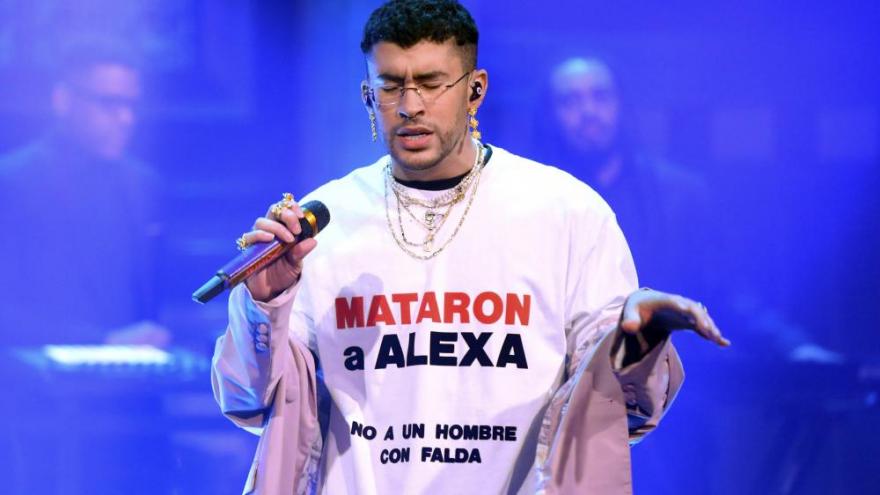 Bad Bunny wore a shirt to draw attention to Luciano's killing during his appearance on "The Tonight Show Starring Jimmy Fallon."

Those were the words emblazoned in Spanish on a T-shirt worn by Bad Bunny on Thursday during his televised performance on "The Tonight Show Starring Jimmy Fallon." The Latin trap star also donned a black skirt, in a clear effort to draw attention to a killing that has shocked his native Puerto Rico over the past week.

The Alexa in question is Alexa Negrón Luciano -- also known as Neulisa Luciano Ruiz -- a homeless, transgender woman who was brutally killed in the city of Toa Baja last Monday.

Her killing has sparked outrage and renewed a conversation on the island about transphobia and other issues that transgender and gender non-conforming people face.

Last Sunday, a person at a Toa Baja fast food restaurant filed a complaint against Luciano for entering the women's bathroom, according to police. After police arrived to investigate the incident and approached Luciano, photos of the police encounter started circulating on social media.

Earlier this week, a video uploaded on social media appeared to show several people taunting and threatening a person widely believed to be Luciano, followed by the sound of gunshots. Authorities are still investigating the video. CNN has not independently confirmed its authenticity.

Police confirmed that day that they had found a body with multiple gunshot wounds in a grassland near a main road in Toa Baja, though they didn't immediately identify who it was. Online, people assumed it was Luciano.

The next day, the Puerto Rico Department of Public Security confirmed that Luciano's relatives had identified her body. Police are continuing to search for suspects.

Puerto Rico Gov. Wanda Vázquez said her death would be investigated as a hate crime.

CNN has so far been unable to reach Puerto Rico police for comment. Earlier Friday, the department responded to a journalist from CBS News on Twitter and said it was not currently commenting on media requests due to the ongoing investigation.

Luciano's death has angered people both in Puerto Rico and the rest of the US, even drawing attention from Democratic presidential candidate Elizabeth Warren.

"I'm heartsick for Alexa and her loved ones," the Massachusetts senator wrote on Twitter. "This epidemic keeps growing. We must use every tool we have to end it and protect trans women of color. #SeLlamabaAlexa"

Pedro Julio Serrano, a prominent LGBTQ activist in Puerto Rico, described the reaction at home as "an earthquake of consciousness" that struck the island.

"People realized she was only using the bathroom like all of us need to do at several points during the day," he told CNN. "It was so unjust."

Serrano condemned some conservative and religious leaders in the country for inciting panic and fear by arguing that transgender people should use bathrooms that correspond with the sex they were assigned at birth. He also said when photos of Luciano first started circulating on social media last Sunday, some people responded with hateful rhetoric.

Serrano also criticized police and local media organizations for misgendering Luciano in initial reports, saying that she was described as "a man dressed in a black skirt." LGBTQ rights and advocacy organizations held a news conference to raise attention to the issue the next day, he said.

The Human Rights Campaign called Luciano's killing a horrifying crime, saying it is believed to be the second violent death of a transgender or gender non-conforming person in the US and its territories this year.

"She had dreams, hopes, hobbies and did not deserve to have her life taken from her," Tori Cooper, director of community engagement for Human Rights Campaign's Transgender Justice Initiative, said in a statement.

"HRC has heard that Ruiz was experiencing homelessness, further highlighting the ways a toxic mix of transphobia and misogyny conspire to put the transgender community at risk of extreme violence."

Trans women of color are at risk of violence

Luciano's death is yet another reminder of the dangers that transgender and gender non-conforming people around the world face.

At least 26 transgender and gender non-conforming people were killed in the US last year, according to a report from the Human Rights Campaign, though advocates caution that the real numbers are likely higher.

Transgender and gender non-conforming people are also overrepresented in the homeless population -- 19% have experienced homelessness at some point in their lives, according to the National Coalition for the Homeless.