A trip to the spa that ended in death. These are some of the victims of the Atlanta-area shootings 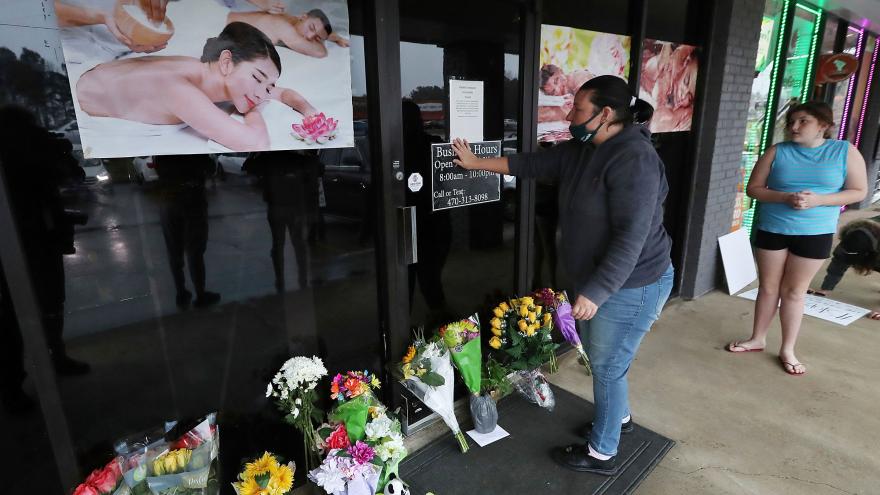 Jessica Lang pauses and places her hand on the door in a moment of grief after dropping off flowers with her daughter Summer at Youngs Asian Massage parlor where four people were killed. - Curtis Compton/AP

(CNN) -- Delaina Yaun and her husband were at Youngs Asian Massage, a spa in Acworth, Georgia, on Tuesday, when a gunman entered and opened fire.

Yaun was killed, one of the nine victims in shootings at three different spas in the Atlanta-area -- one in Acworth and two in Atlanta. Of the eight people who lost their lives, six were Asian women.

Four people were killed at the spa in Cherokee County, about 30 miles northwest of Atlanta. They were identified by authorities as 33-year-old Yaun, of Acworth; Paul Andre Michels, 54, of Atlanta; Xiaojie Tan, 49, of Kennesaw; and Daoyou Feng, 44. One man, Elcias Hernandez-Ortiz, survived.

This is what we know about the victims so far.

Xiaojie Tan, the owner of Youngs Asian Massage, was a loving, unselfish person who made others feel like family, Greg Hynson, a friend of Tan's, told CNN.

"Hey, we're family," he said they would tell each other often. "I'll watch your back, you watch mine."

On his last birthday, Tan sent Hynson a text: "Hey, what are you doing?"

She invited him over to the business, where flowers and a cake with his name on it were waiting, he said, giving an example of her thoughtfulness.

The two met through mutual friends more than five years ago.

Tan was a diligent, hardworking businesswoman, Hynson said, and her employees "were always sweet and nice people," he said. "Very similar to her personality."

Hynson would often stop by her Cherokee County business to say hello, just like he did this past weekend, he said. That was the last time he saw Tan, who was busy at the time.

"I'll come back later," he remembered telling her when he saw her.

"I didn't get a chance to come back later," he said.

Yaun's sister described her as a family-oriented person. Recently married, she was the mother of two children, including an 8-month-old daughter.

"Her family came first. Everything was her family," Toole said. "She had such a wonderful, happy, upbeat personality."

"She was a good person," Toole said. "She didn't deserve that. Nobody deserved it."

Yaun's husband made it out of the Acworth spa safely, according to a GoFundMe page that said her family was heartbroken and "there's nothing anyone could do to help with the pain."

In an interview with Mundo Hispanico, Yaun's husband, Mario Gonzalez, said he was in a different room at the time the shooting started Tuesday, about an hour into the massages.

"They took the most valuable thing I have in my life," he said, adding, "He left me with only pain, the killer who killed my wife."

"She has two beautiful babies she is leaving behind," it said. "We just don't know how to do any of this alone."

Hyun Jung Grant was among those killed at Gold Massage Spa in Atlanta, her son, Randy Park, said on a GoFundMe page that has raised more than $2 million. Park described her as a "single mother who dedicated her whole life to providing for my brother and I."

"She was one of my best friends and the strongest influence on who we are today," he said. "Losing her has put a new lens on my eyes on the amount of hate that exists in our world."

Park said he and his brother are the only members of his family in the United States. The rest of their family is in South Korea.

Elcias Hernandez-Ortiz was shot at Youngs Asian Massage in Acworth -- the sole survivor of Tuesday's shootings.

Hernandez-Ortiz was shot in the forehead and the bullet traveled down into his lungs and into his stomach, his wife, Flora Gonzalez Gomez, said on GoFundMe. He is now in the intensive care unit in the hospital, she said.

In an interview with CNN en Español on Thursday, Gonzalez Gomez said she received a call from her husband, a mechanic, moments after the shooting.

"He called me and told me, 'I got shot, I got shot, please come,'" she said. "That was the only thing he told me. It was terrifying listening to that."

His daughter, 9-year-old Yoseline Gonzalez, watched medics load him into an ambulance after the shooting.

"I don't really know what to do. I try to calm myself down," Yoseline told CNN affiliate WGCL, wiping away her tears.

According to Yoseline, doctors told his family he was very lucky to have survived. "He is a really good dad," she said. "I don't want him to go."

Gonzalez Gomez called it a "miracle" that he is alive.

"And for that I'm very thankful to God," she said, "because I know he'll move past this."

"Our government is closely watching the situation, holding a deep interest in the safety of our compatriots overseas," South Korean Foreign Minister Chung Eui-yong said at a news conference. "We express our deep condolences to the American citizens too."

Activist groups, community members and officials said the attacks heightened existing fear among Asians in the US in the wake of increasing incidents of hate resulting from the Covid-19 pandemic.

"It's difficult to ignore the fact that many of the victims were Asian, all of the victims in Atlanta were Asian, in fact, and that he targeted these Asian massage parlors," Atlanta Mayor Keisha Lance Bottoms told CNN on Wednesday.

"Regardless of the motivation, given the concerns the community already has in light of all the attacks that we've seen -- particularly against Asian American women and the elderly -- I think this is a reminder that we need to do everything that we possibly can to protect the most vulnerable among us," Georgia state Rep. Sam Park told CNN.

The organizations Asian Americans Advancing Justice-Atlanta, Asian American Advocacy Fund, 9to5 and Korean American Coalition Metro Atlanta said they are gathering resources and funds for those impacted and the families of the Asian victims.

Flowers lined all three Atlanta locations Wednesday as the victims were remembered. Jessica Lang took a moment to place her hand on the door of Youngs in Acworth after dropping off flowers with her daughter.

Drawings and photographs of parents and children hinted at the grief the families as they mourn parents, siblings, spouses and children.

There could have been more victims, Atlanta mayor says

The first shooting happened shortly before 5 p.m. Tuesday at Youngs Asian Massage and left four dead. Two of the victims were pronounced dead at the scene and two died at a hospital.

The authorities, seeking to contact next of kin, have not identified the other victims.

Police have a suspect, 21-year-old Robert Long, in custody on charges in relation to the three attacks. Long was arrested 150 miles south of the city, and Bottoms said he was headed to Florida "perhaps to carry out additional shootings."

"It's very likely there would have been more victims," Bottoms said in a news conference at Atlanta police headquarters.

Correction: An earlier version of this story misspelled the first name of Delaina Yaun in a photo caption. The story also misspelled Xiaojie Tan's last name based on information provided by the Cherokee County Sheriff's Office. The story also has been updated to include full and correct names for Yong Ae Yue, Hyun Jung Grant and Soon Chung Park.