A trove of Apollo spaceflight hardware just sold at auction 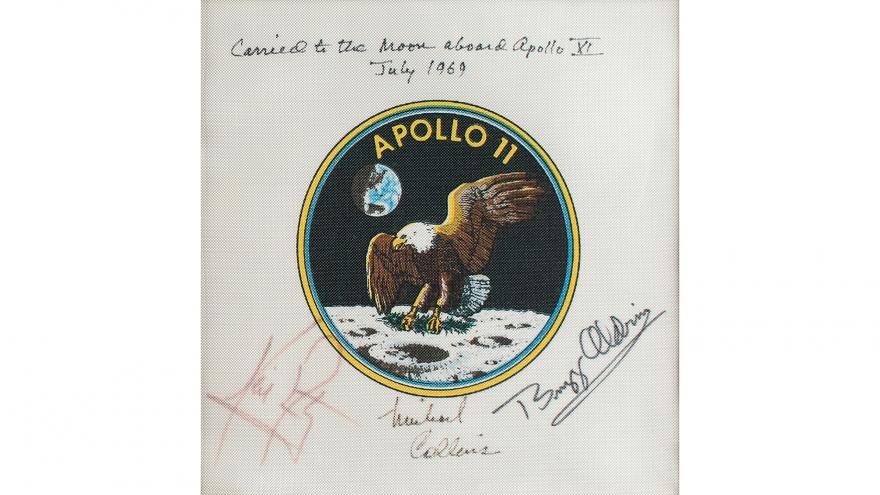 (CNN) -- Dozens of consignors auctioned off priceless pieces of space and tech memorabilia this week — including a rocket engine that carried Neil Armstrong to the Moon and an assortment of meteorites recovered from remote locations across the globe.

This week's auction, which ended Thursday night, sold items from about 45 collectors, including Steve Jurvetson, the SpaceX and Tesla board member and Silicon Valley investor. In all, 288 items sold for $690,000.

Among the most valuable items on the block was a Robbins Medallion, a commemorative coin minted for astronauts on voyages from Apollo 7 on, that flew with Ed Gibson on his 1972 trip to the Moon. It sold for $50,907 — about 10 times more than expected. A small American flag that astronaut Dave Scott carried in his pocket while he walked on the Moon during NASA's Apollo 15 mission in 1971, which was expected to fetch $2,500, sold for more than $30,000.

RR Auction has become a destination for a cohort of space fans with disposable income who are obsessed with preserving (and monetizing) pieces of NASA history. The auction house started as a small dealer focused on historical manuscripts and autographs. In recent years, it's hosted the sale of some of the most valuable pieces of spaceflight history, including the watch astronaut Dave Scott wore during the 1971 Apollo 15 Moon landing, which sold for $1.6 million in 2015.

Many of the objects that have passed through RR Auction's listings were secretly stowed away for decades after the Apollo program ended in 1972. Unbeknownst to the public, early NASA astronauts frequently defied orders by saving pieces of hardware and take them home as keepsakes.

"NASA knew they were doing this, but it caused a ruckus," Bobby Livingston, RR Auction's executive vice president of public relations, said.

NASA sued astronaut Edgar Mitchell in 2011 for attempting to auction off a video camera he'd taken with him during his 1971 Moon mission, as documented by journalist and space historian Robert Pearlman. Mitchell lost the case and was forced to hand the camera over to the US government.

In 2012, however, Congress passed a law that granted Mercury, Gemini, and Apollo crew members ownership over their keepsakes.

That created a thriving spaceflight memorabilia market, Livingston said. And RR Auction zeroed in, signing up astronauts and longtime collectors to use their platform to trade artifacts.

It's a small but competitive and sophisticated market, he added, and RR Auctions caters to it by hosting bi-annual space-focused sales.

"Most of the people that that purchase these things are engineers and in to computers and the internet and now have disposable income," he said. "They're fascinated by men walking on the Moon."

Jurvetson, the SpaceX investor and board member with a checkered past, has been building his space artifact collection for about 11 years, he said. The offices of his investment firm, Future Ventures, serve as his personal museum. Glass display cases are full of pieces of spacecraft hardware. It's even furnished with a couch made from an Apollo Command Module and a rocket tail fashioned into a table.

"My intent is to find the right kind of display where the most people can see it," Jurvetson said. "Every major museum has the majority of its artifacts in storage."

Based on the number of entrepreneurs and other visitors his office typically sees, Jurvetson said he estimates that if his exhibit were a space museum, it would rank in the top 10 nationally in terms of foot traffic.

This week, he chose to sell off a few items — including the Apollo 15 flag and a spoon that astronaut Edgar Mitchell used during the Apollo 14 mission, which sold for $25,000 — because he was running out of room for his collectibles. But he purchased a few items too, he said, including meteorites he hopes he can squeeze onto his offices' shelves.

Unlike some collectors, Jurvetson, 53, said he didn't grow up as a collector or even an avid space fan. He said he developed that passion because of SpaceX, the Elon Musk venture credited with ushering in the commercialization of space. Jurvetson was one of Musk's earliest backers.

But collecting space artifacts is not all about the passion, Jurvetson said. They're also an investment.

"I try to acquire things that I think are the right price," he said. "And I will tell you that in 10 years, they've definitely gone up in value."