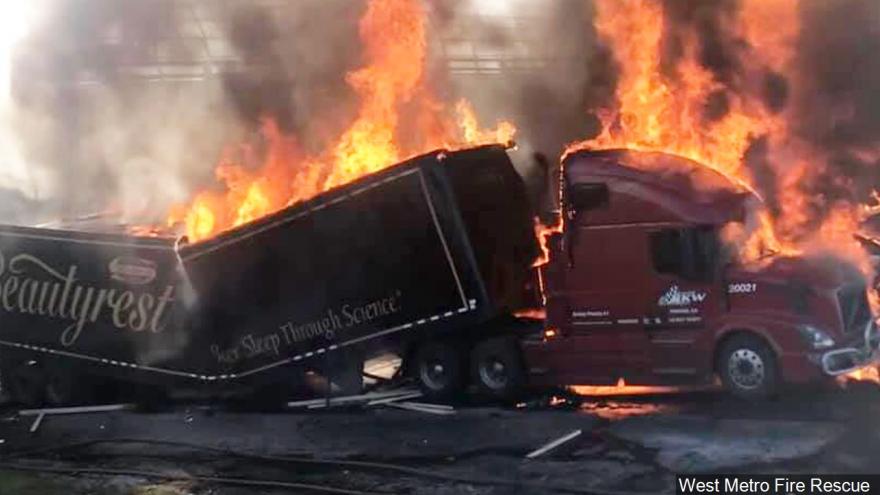 (CNN) -- A trucker has been charged with 40 counts, including vehicular homicide, in the deadly and massive pileup outside Denver last week, the Jefferson County district attorney's office said Friday.

Held at the county jail on a $400,000 bond, Aguilera-Mederos was to be formally advised of his charges later Friday.

The 28-vehicle pileup took place on April 25 in the eastbound lanes of Interstate 70 at Denver West Parkway.

"Aguilera-Mederos is alleged to have been traveling eastbound, driving a semi-tractor and trailer when he lost control and crashed into traffic that was backed up from an earlier crash at I-70 and Ward Road," the office said.

Investigators say Aguilera-Mederos told them he was driving at 85 mph when his brakes failed. He tried to pull over to the shoulder to avoid stopped traffic but another semi had stopped there, an arrest affidavit shows.

Four Colorado residents were killed in the crash: Doyle Harrison, 61, of Hudson; Miguel Lamas Arrellano, 24, of Denver and Stanley Politano, 69, and William Bailey, 67, both of Arvada.

The arrest affidavit said more than two dozen vehicles were engulfed by a "large fire." Four people were injured.

The Denver West Parkway bridge over I-70 sustained significant structural damage from the fire, authorities said.