A Vietnam vet kills an intruder. Then, cops show up and shoot him dead by mistake 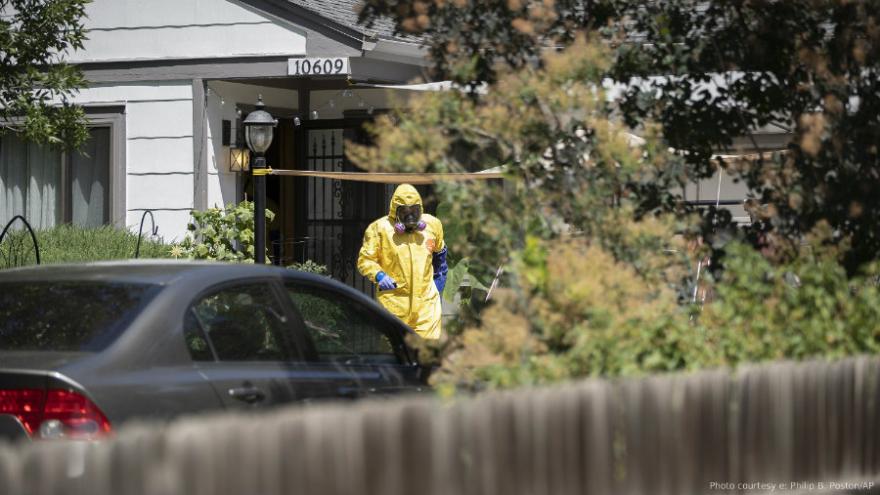 (CNN) -- A case of mistaken identity left a man dead after protecting his family from an invader.

Officers were dispatched to an Aurora, Colorado home around 1:30 Monday morning. They heard gunshots coming from inside the house, according to Aurora Police Department Chief Nick Metz.

Upon entering, officers saw a dead body lying on the bathroom floor, and assumed he was a victim of the invasion. Then, Metz said, they saw Richard "Gary" Black, 73, standing in the living room --- alive --- and armed. He was perceived as the perpetrator, so they opened fire.

But Black was not the invader. He lived there.

Metz detailed the following events Thursday in a press conference: When officers arrived to the home, there was yelling. A number of people were standing outside the home, including Black's wife. When officers passed her, she said "he has a gun."

Then, shots rung out from inside. Black emerged shortly after, with a gun in one hand and a flashlight in the other. Standing by the front door, within 15 to 20 feet of Black, officers commanded Black to drop the weapon and put his hands up several times.

"We don't know why, but for whatever reason, Mr. Black did not drop the gun," Metz said.

Black raised the flashlight, and it was then that an officer fired four rounds at him, he said.

Black had just shot the intruder, identified by police and the coroner's office as 26-year-old Dajon Harper. Harper, naked, continuously knocked on the Blacks' door, eventually knocking it off its hinges.

Everyone in the house --- Black, his wife Jeanette and 11-year-old grandson --- was asleep. Harper went after the grandson and dragged him into the bathroom, according to the APD.

Metz did not go into detail about the attack, but said he was "violently assaulted."

Mrs. Black called 911. She reported the attacker was in the bathroom hurting her grandson, and that there was blood everywhere.

Mrs. Black declined a request for comment by CNN.

The officers did not realize Black was a resident until "further investigation," the APD's initial statement said.

"(Officers) were confronted by a very, very violent and complex situation, and within two minutes, if that, had to make some very, very critical decisions," Metz said.

Harper was attending a party across the street, and "began damaging cars right near the house, was acting irrationally ... and at one point, he injured himself," Metz said.

After leaving the party, he made his way to the Blacks' residence.

There were "probably upwards of 10 people at that house at one time before police got there," as other attendees of the party tried to get Harper out of the residence. But he locked the door behind him, Metz said.

Officers proceeded from the living room, where Black had been killed, to the bathroom, where they still heard screams. The boy and his father were found sitting in the bathtub, with Harper's dead body lying nearby. The boy yelled to officers that it was Harper who attacked him, and gave them a detailed account of the incident, Metz said.

It is unclear if the boy's father had been there the whole time.

The ordeal unfolded quickly. By the time officers made it to the bathroom, they had only been there for two minutes and 27 seconds, according to the APD.

Black was transported to the University of Colorado Hospital, where he died from his injuries. The Purple Heart recipient list shows that Black received the award for his time in the Vietnam war.

The shooting is being investigated by the APD, the Denver Police Department and the 17th and 18th District Attorney's Offices. The officer who killed Black has been placed on paid administrative leave, Metz said.

"This incident was not only tragic, but incredibly heartbreaking for the involved family, the community, and our department," the APD said in a Facebook post.

"In order to conduct a comprehensive investigation, we continue to methodically collect evidence, interview witnesses, and review all available recordings, to include the body worn cameras of all involved officers."

Body camera footage and the 911 calls are being withheld while the investigation continues, as requested by the district attorney's office and the family, Metz said.

The department is also withholding the name of the officer who fired the shots to ensure his safety, an APD spokesman told CNN.

"Any disrespect to law enforcement carried out in Mr. Black's name would be contrary to his wishes," the family said in a statement.

The unnamed officer, who is also a veteran, has been with the department for three years with no prior internal complaints, Metz said.

"He's incredibly heartbroken over this situation. He being a veteran himself, and finding out what Mr. Black had done to save his family ... has been devastating to him," he said.

Metz confirmed that the officer was involved in another fatal shooting on June 27. He returned to work about two and a half weeks later, while the investigation continued.

Metz defended this decision, saying "He went through all the requirements that are part of our policy for officers to adhere to prior to coming back after an officer-involved shooting."

Black's family will be represented in court by Colorado-based law firm Rathod Mohamedbhai, LLC. The attorneys did not immediately respond to CNN's requests for comment.