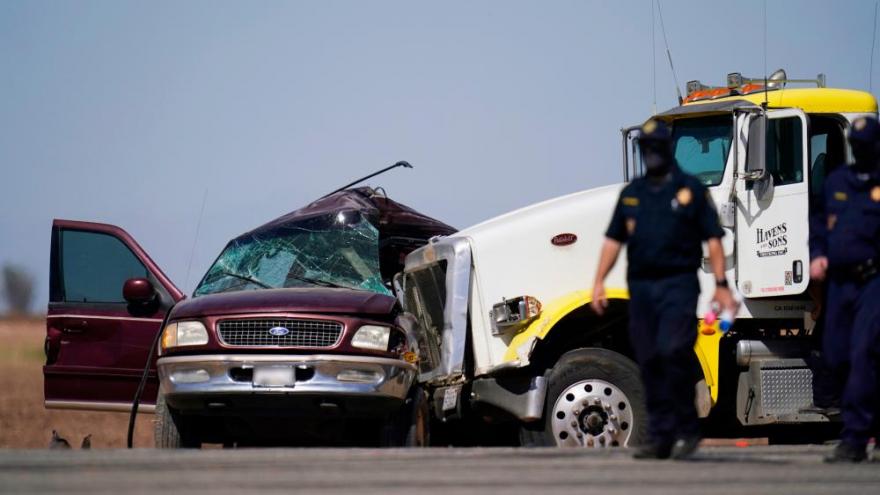 The scene of a deadly crash is seen in Imperial County, California. CNN has blurred a portion of this image.

(CNN) -- Hours after 13 undocumented migrants were killed in a collision on a desolate stretch of California's Imperial Valley, Hugo Castro said a prayer and planted small crosses on the sandy, rocky edge of the cordoned-off highway.

The crosses were fashioned from cedarwood at a shelter just across the US-Mexico border by other migrants -- some recently deported, others preparing to embark on the trek north. Messages such as "Jesus was a migrant" and "No more deaths" were scrawled in Spanish on the colorful crosses, which were originally intended as symbols of immigration rights but have instead become familiar markers of tragic journeys.

"These latest deaths make news for a day or two," said Castro, 49, an organizer with the advocacy group Coalition for Humane Immigrant Rights (CHIRLA). "Then they're forgotten."

The collision between an SUV crammed with 25 people and a semi-truck on the outskirts of the small town of Holtville highlights the perils of human smuggling along the border, according to immigration authorities. It also points to the desperation of those fleeing poverty, unemployment and crime -- even during a pandemic -- for life in a sometimes hostile land, advocates said.

"They are our untouchables," said Castro, 49, referring to undocumented migrants whose lives are perceived not to count. "We have to give them a voice."

Migration across the Southwest border has been increasing since October, with nearly 300,000 apprehensions and expulsions through the end of last month, according to US Customs and Border Protection. Nearly 80,000 of those encounters occurred in January -- compared to more than 36,000 during the same time one year ago. In fiscal 2020, which runs from October to September, there were more than 458,000 encounters.

The majority of those crossing the border in recent months are single adults, many of whom are from Mexico. 87% of the 71,000 migrants detained in December were single adults.

"This is ground zero for border crossings," Enrique Morones, the retired founder of the San Diego-based nonprofit Border Angels, said of the easternmost stretches of the Southwest region. He plans a vigil at the Imperial Valley crash site next week.

On Tuesday, tragedy struck less than a mile from a Holtville cemetery where most of the unmarked graves in the back hold the remains of unidentified migrants who died attempting to enter the US. Rows of numbered bricks -- engraved with the words "Jane Doe" or "John Doe" -- mark more than 500 graves. Castro, Morones, and other activists have left flowers and crosses there, too.

Imperial County is not only a bustling agricultural region but also a migrant trafficking hub where so many illegal border crossings have been cut short by the vast and unrelenting wilderness.

"The whole frontier region is stained with the blood of mothers and babies, grandmothers and grandfathers, fathers and mothers, sons and brothers," Castro lamented.

The 13 people killed Tuesday were among dozens of undocumented migrants who entered the country through a hole in the border fence with Mexico, according to the US Border Patrol. In all, 44 people had reached US soil through a 10-foot breach in the fence near Interstate 8.

One vehicle, a maroon Ford Expedition that can typically safely seat up to eight people, was packed with 25 migrants -- its rear seats removed. The other SUV later caught fire, and 19 migrants who fled the vehicle were taken into custody in the nearby brush.

Verlyn Cardona, 46, had made the journey from Guatemala with her 23-year-old daughter, Yesenia, who died at her side during the crash.

Cardona remembered walking to the border with other migrants for almost an hour. An SUV awaited them. She doesn't believe the plan was for so many people to pile into the back, Cardona told CNN en Español.

"People were running in and climbing on top of others," she said from a hospital. "The door closed. We said, 'There's not enough room. Open the door.' The truck was moving."

A dozen people died at the scene

Police got a call about the crash at 6:15 a.m. The big rig towing two empty trailers was traveling north on State Road 115. The 1997 Expedition was heading west on Norrish Road in the Holtville area -- about 100 miles east of San Diego, according to California Highway Patrol Border Division Chief Omar Watson.

The 2011 Peterbilt semi-truck was traveling at an unknown speed when it broadsided the SUV. It's not clear whether the SUV stopped but it entered the intersection in front of the rig, Watson said.

Some occupants were ejected from the SUV. Others were found dead inside, according to Watson. A dozen people died at the scene -- including the driver -- and another person died at a hospital. Nine others, including two minors, were still in hospitals on Thursday.

Cardona recalled the crushing weight of others on top of her in the SUV. Next, she was opening her eyes as she lay on the asphalt.

"I woke up and we were scattered about the road," she said. Her head and face hurt. A person near her pleaded for help. Her daughter lay against her legs.

"She was already dead," Cardona said. "I checked on her, turned her around. I talked to her, touched her. She had no pulse. Her lips were purplish. I didn't see bruises on her face."

Cardona said she left the town of Chiquimulilla near Guatemala's Pacific Coast with her daughter after the young college student and aspiring lawyer had received death threats from a local gang.

Cardona's brother, Rudy Dominguez, who was also fleeing gang violence when he emigrated to the US 16 years ago, said the pandemic, joblessness and crime had devastated Chiquimulilla.

"You have two choices: You die in Guatemala or you fight for your dream and come here and stay here ... and get a better life with your family," he said.

The SUV passengers ranged in age from 15 to 53, authorities said. They came from Mexico and Guatemala.

At least 10 of the 13 killed in the crash were Mexican nationals, according to consular officials.

The SUV driver was from the border city of Mexicali, the capital of the Mexican state of Baja California.

On the morning of the collision, authorities responded to a call of a red Chevrolet Suburban engulfed in flames near the intersection of Interstate 8 and State Route 115, where 19 people were found hiding in the brush. The Border Patrol said they too had entered the country through the hole in the border fence.

It's not known what caused the semi truck to ram into the driver's side of the Expedition at the rural intersection about 10 miles north of the border with Mexico.

US Customs and Border Protection (CBP) said agents never attempted to stop or pursue either SUV.

The highway patrol and the National Transportation Safety Board are looking into the cause of the crash, while CBP leads the human trafficking investigation.

"Human smugglers have proven time and again they have little regard for human life," the CBP's El Centro sector chief, Gregory Bovino, said in a statement. "Those who may be contemplating crossing the border illegally should pause to think of the dangers that all too often end in tragedy; tragedies our Border Patrol Agents and first responders are unfortunately very familiar with."

US officials have attributed the increase in border arrests in part to instability in Latin American countries, exacerbated by the coronavirus pandemic and perceptions of shifts in immigration policy.

The pandemic has taken a toll on Latin America, where Covid-19 cases and deaths have soared and economies once projected to grow have been decimated.

In a holdover from the Trump administration, people encountered illegally crossing the US-Mexico border can be swiftly expelled from the country with little consequence under a public health order put in place last year. That's led to single adults trying to cross multiple times. And advocates said the policy forces some migrants to try to evade authorities at any cost.

The most recent numbers for deaths along the Southwest border were not available. But CBP reported in October that agents in that region had found at least 300 unidentified migrant remains in fiscal 2019, the highest number in three years.

Most of the remains -- men, women and children, many from Mexico and Central America -- were likely people who died from dehydration or exposure to intense heat or sub-freezing temperatures, according to the CBP. Some starved to death after being abandoned by smugglers.

Others are assaulted and killed along the way or die in accidents like the one near Holtville on Tuesday. Still, others drown in places like 80-mile All-American Canal -- which feeds the Imperial Valley's vast, day laborer-dependent agricultural lands with water from the Colorado River.

"The first thing a lot of people meet when they hop the fence is the canal," said Nikolai Beope, a member of the group Water Station, which leaves water in plastic drums for dehydrated migrants. "If you go to the canal you see a bunch of homemade floatation devices. It's such a violent gamble, and people are consistently willing to do it."

Castro, the immigrant rights activist, said he rushed from the border city of Calexico to the crash scene Tuesday with a box of crosses after seeing a Facebook post.

"A tanker truck pulled up that evening and started spraying water on the road," he said. "For a moment it felt like the highway was covered in blood. I turned away and put down more crosses."