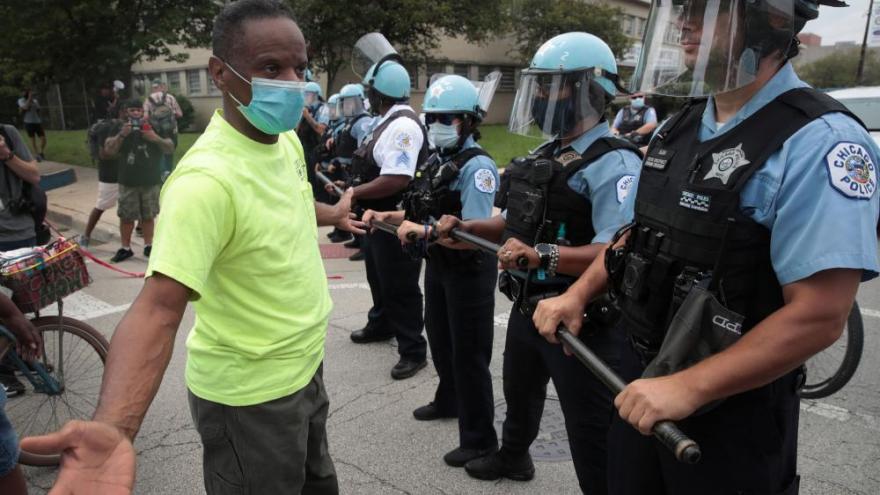 Police prevent demonstrators protesting police brutality from marching toward the freeway on August 15, 2020 in Chicago, Illinois.

(CNN) -- Peaceful protests throughout Saturday were hijacked by agitators later in the day, leading to multiple arrests and officers getting injured, Chicago police said.

"People are tired," protester Taylor Smith told the news station. "No one wants to die at the hands of CPD."

Police made no arrests during the daylong protests, Chicago Police Superintendent David Brown said in a news conference. Those demonstrations and marches, covering nearly five miles, were peaceful, and police were there to ensure the safety of protesters, Brown said.

But a separate protest that occurred Saturday evening resulted in 24 arrests after "multiple agitators" used black umbrellas, changed their appearance and assaulted officers by using skateboards, bottles, bicycles and other projectiles as well as mace, Brown said.

Four of the arrests were for battery of a police officer -- a felony charge, Brown said. Seventeen officers were treated for non-life-threatening injuries, and two people were treated at the scene, he said.

Protesters told WLS they were also met with force from police.

"In my opinion, what went wrong was I just think the cops don't know how to de-escalate situations. They just bring it to a scary level," protester Womyn Wonder told the affiliate.

Brown defended the actions of police, saying officers responded proportionately to get the situation under control and used pepper spray to deter agitators.

Video of the incident will be released Sunday, the police superintendent said.