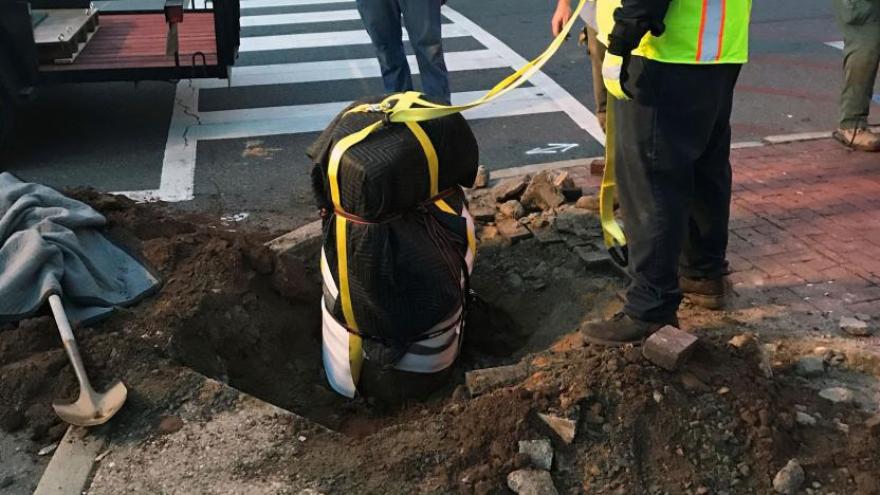 The auction block is removed by workers in Fredericksburg, Virginia, on Friday, June 5.

(CNN) -- The city of Fredericksburg, Virginia, has removed an auction block marking the spot where African Americans were once displayed and sold as slaves.

The 800-pound slave auction block was removed from a downtown corner Friday morning after nearly two years of deliberation among City Council, months of legal action that threatened to keep the stone in place, and weeks of postponement due to the state's coronavirus restrictions.

"The institution of slavery was central to the community prior to the Civil War," said John Hennessy, chief historian of Fredericksburg and Spotsylvania National Military Park. "The trauma involved in that passed through generations. The block became an embodiment of the present and past pain in this community."

Local tradition, records, and statements by African Americans themselves have identified the elevated stone as a place where slaves were sold. "There is no direct quote noting that a slave stood on the block to be sold, but there are statements made in the post-Civil War years by African Americans stating they were sold on that corner," the city notes on its website.

Other similarly contentious sites that have been the subject of nationwide debate are being removed amid protests following the recent deaths of Ahmaud Arbery, Breonna Taylor and George Floyd.

Virginia Gov. Ralph Northam has announced plans to remove a statue honoring Confederate Gen. Robert E. Lee from Richmond's historic Monument Avenue. In Birmingham, Alabama, a statue of Confederate sailor Charles Linn was toppled by demonstrators and is scheduled to be removed by city officials.

Indianapolis Mayor Joe Hogsett said that a memorial dedicated to Confederate soldiers who died at a Union prison camp in the city will be removed from a local park.

In Fredericksburg, the slave auction block became a site for protests, and it was recently tagged with red, green and white spray paint.

"I think it really hit home when there were hundreds of people at the block saying, 'Move it,'" Councilman Chuck Frye Jr. said.

Frye, who grew up in Fredericksburg, has childhood memories of people mocking or spitting on the stone as they walked by. He also recalls stories of tourists taking photos with the slave block.

"I think racist folks loved it, historians understood it, and black people were intimidated," Frye said.

Frye, the only African American on City Council, proposed removing Fredericksburg's slave auction block in 2017 -- shortly after the deadly "Unite the Right" rally in Charlottesville, Virginia, just an hour and a half drive's west.

After consulting members of the community, all of City Council, except for Frye, voted to keep the auction block in place while adding historical context to the site.

"It felt terrible," Frye said. "At that moment, I felt like I was on an island."

But the votes against removal only increased Frye's passions.

"I stayed the course," Frye said. "I'm not going to waste a cushion in my council seat."

After the vote, City Council hired a non-profit -- the International Coalition Sites of Conscience (ICSC) -- that works to tell the stories of historic sites that represent pain in the community or human rights violations. The non-profit helped the city engage the community in conversations, which Mayor Mary Katherine Greenlaw said has helped Fredericksburg be "more honest about our history."

"The auction block was the topic, but what you really wound up talking about were historical events of injustice and racial biases," she said.

After the ICSC gave the city a report of its findings, which didn't include specific guidance on course of action for the slave auction block, Frye once again brought his proposal to remove the stone. City Council voted 6-1 to approve its removal in November.

But a few months after the vote, two local businesses filed a petition to keep the auction block in place, the Free Lance-Star reported. A judge ruled in favor of the city, but one of the businesses, E.D. Cole Building, asked the Virginia Supreme Court to block the stone's removal while the judge's decision was being appealed, the newspaper reported.

The legal obstacles were not cleared until April 1, according to the city, weeks into Virginia's state of emergency due to Covid-19. The auction block was removed when the state entered "Phase Two" of its guidelines on easing public health restrictions.

Lee R. Lewis Jr., a 71-year-old retiree from a career in finance, grew up in Fredericksburg during segregation. He said he no longer experiences the overt racism he did as a child, but that he is glad to see the slave auction block go.

"It reminds us of a time when we were mistreated, we were property, we weren't considered human beings, we weren't equal," he said. "It brings back those memories."

The Fredericksburg Memorials Advisory Commission is developing a plan to commemorate the site with historical context. The slave auction block itself is on loan to the Fredericksburg Area Museum for the next 20 years.

"We need to pave the way to make changes, and we can't make changes if the slave auction block is sitting on the corner," she said.

One issue she'll focus on is what to do with the graffiti spray painted on the stone during protests.

"My recommendation has been very strong in not cleaning it because the graffiti itself tells a story," she said. "By cleaning it, you erase history."

CLARIFICATION: An earlier version of this story referred to the auction block as a stone on which slaves once stood. It isn't known exactly what role the stone played in the auctioning of slaves.