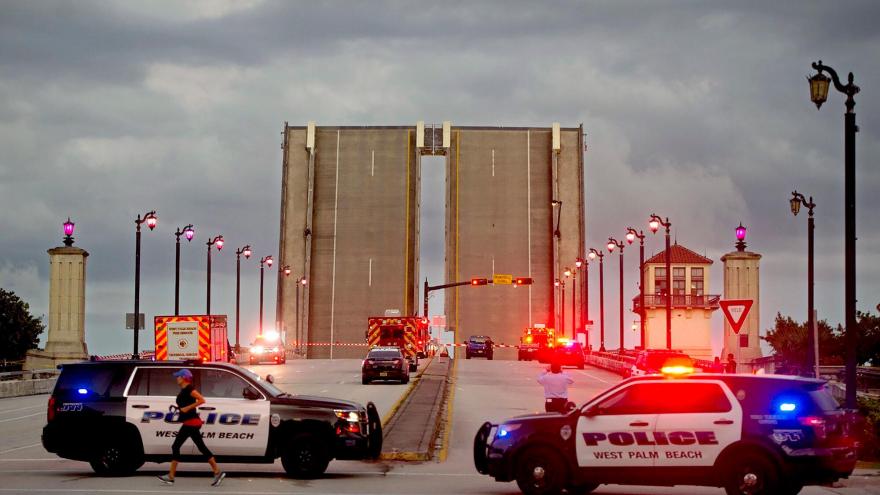 (CNN) -- Authorities in West Palm Beach, Florida, are investigating the death of a bicyclist who fell to her death from a drawbridge as it opened.

The victim was seen walking her bicycle on the sidewalk portion of the Royal Park Bridge, which connects West Palm Beach to Palm Beach, just after 1 p.m. Sunday, according to West Palm Beach Police spokesman Mike Jachles.

The woman was within 10 feet of the end of the elevated portion of the bridge when it began to rise, according to police.

A male bystander on a skateboard, who was several feet away from the victim on the fixed part of the bridge, unsuccessfully attempted to grab the woman, who was holding on to the railing. She lost her grip, falling five to six stories below the bridge onto a concrete landing, Jachles said.

As of Monday afternoon, police have not yet been able to identify the woman. She did not have identification, according to Jachles. He described her as an older woman and possibly a West Palm Beach resident.

Investigators are now working to determine how the bridge opened before it was cleared of pedestrians and whether any safety protocols were violated, Jachles said.

"There are warning signs and there are safety procedures in place for the bridge tenders to follow, with multiple steps and multiple layers of checking to make sure that there are no cars or people on the bridge when it goes up," Jachles told CNN affiliate WPBF.

"So that's all part of the investigation, to determine whether procedure was followed or whether this woman crossed after the signals were down," he said.

The bridge was shut for nearly six hours on Sunday while police investigated the scene. No other injuries were reported.