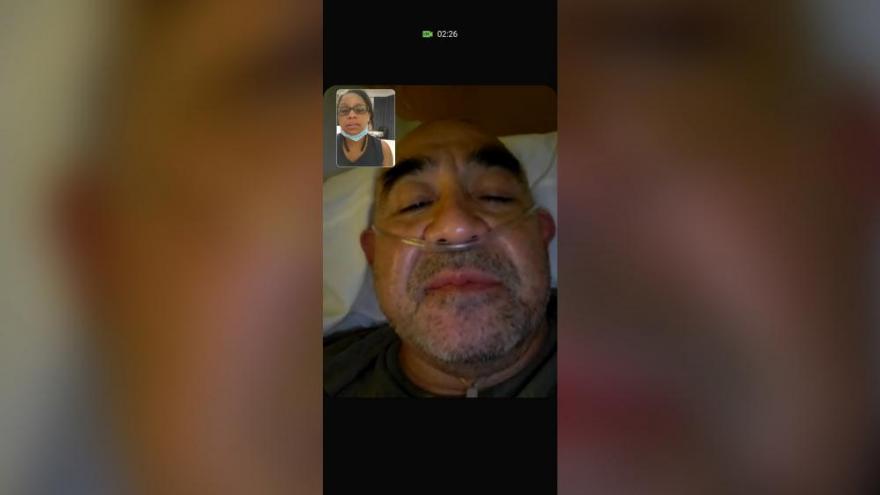 A screenshot from a FaceTime call between Michelle and David, before he was put on a ventilator.

(CNN) -- If you ask Michelle Gutierrez, there's nothing more powerful than love and prayer -- that's why when her husband, David, who's battling coronavirus, was put on a ventilator, she knew exactly what to do.

Every day for the past two weeks, Michelle has been visiting her husband at St. Luke's hospital in Houston, Texas. Even though he's in a coma and can't hear or see her, she told CNN, she stands in the parking lot underneath his hospital room window and prays for him an hour every day.

"I can see him in my mind," Michelle said. "I can put it all together when I'm praying, I can see him in that bed, and it puts a smile on my face even though he isn't where I want him to be."

On July 8, David was hospitalized. About 10 days later, Michelle said she got a call from a nurse saying he was going to be put on a ventilator because his oxygen levels had dropped to an unhealthy level.

"It was one of those, 'say goodbye to your loved one because we don't know if they're going to get out of here' phone calls," Michelle said.

"I love you and see you later" are the last words Michelle heard from David on July 18.

When she hung up, Michelle said her first feeling was an overwhelming sense of fear. That's when she turned to prayer.

"I felt a calmness come over my body and I was able to just be OK," Michelle said. "I fell asleep that night, how I don't know...but I know that it must have been God because there's no way I could have gone to sleep that night."

This is the first time in 10 years that the couple have been apart for more than one week.

Fueled by prayer to do more than write letters

Before David was put on a ventilator, Michelle said they would swap text messages back and forth and occasionally FaceTime, even though it became increasingly difficult for David to speak -- Michelle said she'd do all the talking and David would listen.

And even though he's in a coma right now, Michelle still keeps up her end of the conversation by writing letters to him several times a day. She faxes the handwritten letters over to the hospital for David's nurses to read aloud to him.

"He's going to have a lot of reading to do when he wakes up," she said. "I text him in between the letters so he will maybe have days of reading to catch up on."

"When those nurses read those letters to him, I have faith that he can hear those words," she said.

On July 22, four days after David was out on a ventilator, Michelle said she "just wanted to be close to him," so that's when she decided to go to the hospital, even if that meant connecting with David from afar, outside his room.

Michelle posted about her idea on Facebook and welcomed others to join too.

"I wish I was doing this before it (coronavirus) hit my family but it's never too late to start," she wrote on Facebook, "You all are more than welcome to join in person or at home to pray."

Over the last couple of weeks, Michelle said she's been joined by strangers, church members, nurses and friends who say they have all gained a little extra hope in their own lives because of her efforts.

On Tuesday, Michelle said a nurse called her to the hospital to see David through the glass window of his room.

On her walk to his room, Michelle said she couldn't contain her excitement.

"When I actually saw him in person through the glass, he looked good," she said. "I was able to talk to him through the intercom and it was a short visit, but it was nice, I felt so close."

A wedding anniversary unlike the rest

Michelle and David met in 2009 while she was having her car serviced. There was a language barrier between the shop owner and Michelle, so David stepped in to assist because he's fluent in Spanish.

Once the pair met and exchanged contact information they began dating shortly after.

Michelle said David told her several times throughout the beginning of their relationship, '"You know you're going to be mine, you know that right?'"

After two years of dating, the couple got married. Now, their 10-year anniversary is around the corner on September 4.

To celebrate, Michelle said David had plans to take her to the beach -- a plan she said she's holding him to once his health improves.

For others going through similar situations with loved ones, Michelle said keeping a positive mental attitude, saturating yourself in prayer and holding onto hope are what gets her through.

"When the time is right, he's (God) going to breathe into his lungs and restore his health," she said.

And until that happens, Michelle said she isn't going to stop showing up and praying for her husband, even if that means from a distance.