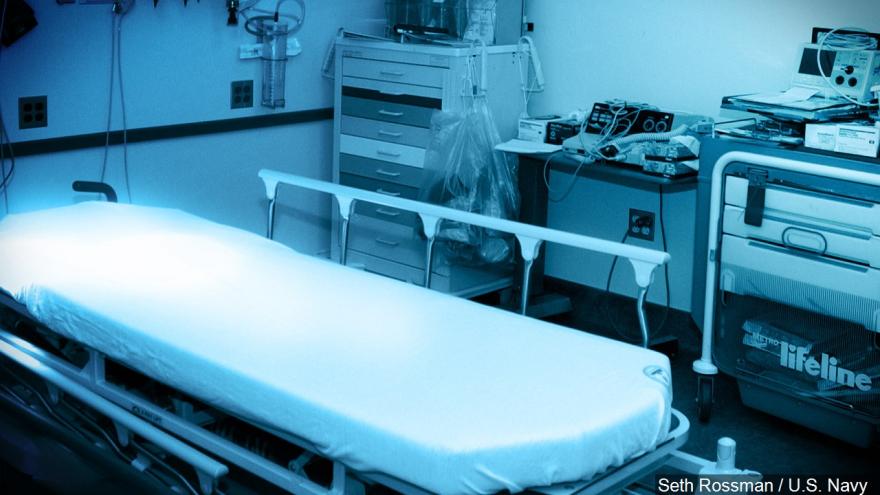 (CNN) -- Tashonna Ward walked into an emergency room in Milwaukee one evening this month to get treatment for chest pains and shortness of breath.

After waiting more than two hours, the 25-year-old left and went to seek help at an urgent care, the Milwaukee County Medical Examiner said in a report. She collapsed by her car as soon as she arrived at the urgent care, and was pronounced dead not long after.

Her family wants to know why it took so long for her to get medical help.

"I really don't think they cared about my daughter," her mother, Yolanda Ward, told CNN affiliate WDJT. "She should not have been waiting out there that long."

The younger Ward arrived at the Froedtert Hospital emergency room in Milwaukee on Jan. 2. It was 4:58 p.m.

She was there for 2 hours and 29 minutes, the medical examiner's report said. During that time, she got an electrocardiogram (EKG), which was normal, and a chest X-ray that showed she had cardiomegaly -- an enlarged heart.

Ward had a miscarriage in March, after the umbilical cord wrapped around her baby's neck, and had been told she'd developed an enlarged heart during the pregnancy, the medical examiner's report said.

It's unclear whether she'd had the enlarged heart all along since the pregnancy. Cardiomegaly can be caused by short-term stress on the body such as pregnancy, or a medical condition like the weakening of the heart muscle, coronary artery disease and heart valve problems.

Around 7:27 p.m., upset by the long wait, Ward left the ER and headed to an urgent care with her sister in search of faster medical help.

"She didn't even have a band on her wrist (when I picked her up) so she was never even processed in," her sister, Brianna Ward, told the affiliate. "All they did was take her to the back, do chest X-rays, send her back in the lobby. She was never even admitted."

While at the hospital, Ward posted messages on Facebook criticizing the long wait, the affiliate reported.

About an hour later, at 8:39 p.m., the hospital called her phone to check on her.

Her sister told the caller that Ward had collapsed by their car as soon as they arrived at the urgent care, and was on the way back to the hospital in an ambulance, according to the report.

"I need them to explain this to me, why they didn't treat my daughter when she was there," her mother told the affiliate.

By the time she arrived at 9:07 p.m., Ward was unresponsive. She was pronounced dead minutes later -- at 9:25pm. The cause of death was hypertensive cardiovascular disease and the manner of death was natural, according to the medical examiner's office.

"The family is in our thoughts and has our deepest sympathy," hospital spokesman Steve Schooff told CNN.

Ward's relatives said they are struggling to come to terms with the tragedy, and they're hoping to find out what happened to the beloved day care teacher who loved children.

"We ask that those who hear about Tashonna's story continue to keep us in prayer, as this is still overwhelming and unbelievable," her family said in a statement. "We are wracked by grief, yet we are grasping to find answers."

The family's attorneys said they're working to get more information on her death. "The issues surrounding this tragedy involve more than just the Ward family, as they are issues that pose a threat to us all," attorney B'Ivory LaMarr said in a statement.