A woman saw a boat capsize out her window during a work video meeting. Her 911 call saved 3 fishermen 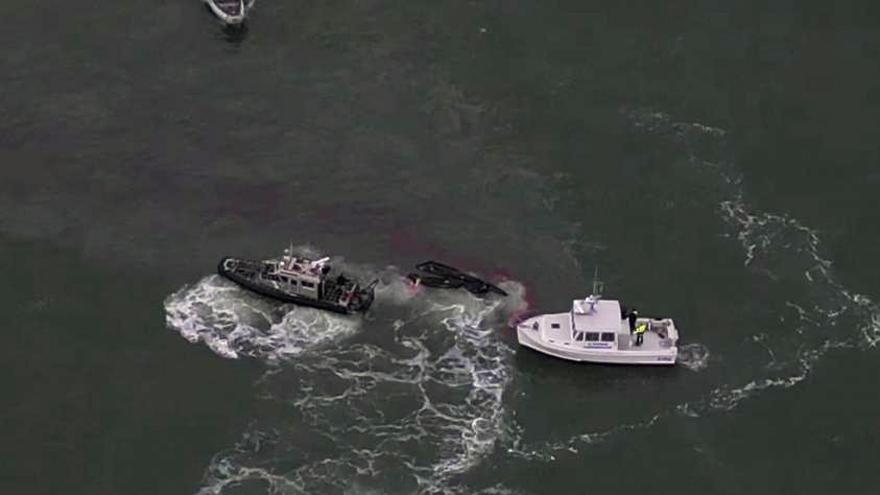 Rescuers work to save three fishermen who held on to debris surrounded by a slick of diesel fuel after their 55-foot boat sank on Tuesday.

(CNN) -- Three fisherman were rescued from the frigid waters off the Massachusetts coast after a woman working from home happened to look out her window and saw their boat capsize and sink.

Clinging to floating fishing gear to stay afloat, the men were in the water for almost an hour on Tuesday before help arrived, according to the Scituate Police Department. They were not wearing life jackets or survival suits.

Pam Harght saw the boat in the distance during a work video call while at her home in Marshfield, some 30 miles south of Boston, she told CNN on Friday.

She quickly realized something was wrong.

"It looked like the boat was taking on water, which I guess at the time, it had actually rolled, and then I saw a dark cloud of smoke and then the boat disappeared," Harght said. "That was probably in the matter of 60 or 90 seconds."

Harght said she was in shock at first and assumed that rescuers were on the way, but didn't see any response.

"I just really started kind of panicking on the inside," she said. "So I just excused myself from my work call and then called 911."

It turns out, she was the only person to report the accident.

Joe Roderick, one of the crew members of the "Bing Bing", told CNN affiliate WCVB that the 55-foot boat flipped and sank so quickly that they had no time to send a signal for help.

"Normally, boats will lean to one side when you're hauling back, and this boat just kept leaning," Roderick told WCVB. "The next thing I know, the rail -- which is about 5 or 6 feet from the water -- was touching the water."

Roderick suffered bruises on both of his arms from holding on to debris while the crew waited to be rescued.

"We were in the water just making small talk, just to keep each other alert," Roderick told WCVB. "A million things ran through my head: 'Am I going to make it home to see my daughters?'"

The fire department used an aerial drone to locate the men, who were about a half-mile off shore and surrounded by a slick of pink diesel fuel, according to its Facebook page.

Rescuers in boats were able to pull them out of the water and get them to a hospital to be treated for severe hypothermia, police said. The water temperature that day was a dangerously low 42 degrees, according to officials.

"We had three victims clinging for life," Scituate Fire Chief John Murphy told WCVB, adding that the men had swallowed a lot of diesel fuel and sea water during their ordeal.

They probably wouldn't have survived if Harght hadn't called for help, the fire chief said.

Harght said she's thankful that the boat went down in a spot that wasn't blocked from her view by taller houses on the beach and that she happened to be at her desk when it happened.
"All of it is just sheer luck and nothing worked in their favor, except the fact that I happen to be looking out the window," she said.