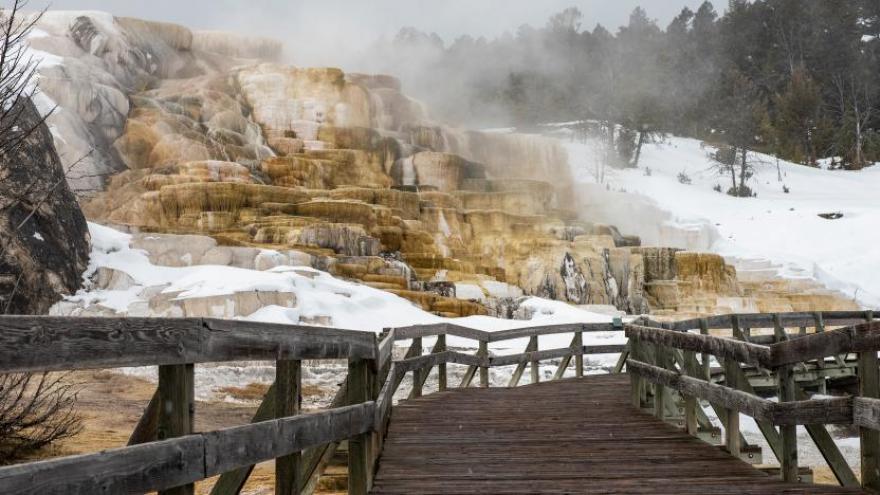 A picture from March of empty boardwalks at Mammoth Hot Springs in Yellowstone National Park. A woman suffered burns after falling into a thermal feature, according to the park officials.

(CNN) -- A woman suffered burns after falling into a thermal feature at Yellowstone National Park on Tuesday, according to the park officials.

Yellowstone has been closed to visitors since March 24 due to the coronavirus pandemic. The woman "illegally entered the park," the National Park Service (NPS) said in a statement.

She told park rangers she was backing up to take pictures when she fell into a thermal feature at the Old Faithful Geyser, one of the most famous geyser's in the world.

"Hot springs have injured or killed more people in Yellowstone than any other natural feature," reads the park's website. It also warns visitors to stay on the boardwalks and trails in these thermal areas.

After falling, the woman, who was not identified by park officials, was able to get in her vehicle and drive through the park when she was contacted by rangers. Due to her injuries, she was life-flighted to the Burn Center at Eastern Idaho Regional Medical Center, park officials said.

The Old Faithful Geyser erupts about every 90 minutes, according to the NPS, and the average water temperature is 169.7 degrees Fahrenheit.

The woman's condition is unknown at this time. NPS said it is continuing to investigate this incident and is not sure which thermal feature she fell into.

Trespassing at the park can net individuals seriously repercussions.

Earlier this year, two men that were caught trespassing on the cone of Old Faithful Geyser, which is a closed thermal area, were sentenced to 10 days in jail and five years of probation. They were also ordered to pay $540 restitution and banned from the park for five years.

"Visitors must realize that walking on thermal features is dangerous, damages the resource, and illegal," Park Chief Ranger Sarah Davis said in January about the sentencing. "Law enforcement officers take this violation seriously. Yellowstone National Park also appreciates the court for recognizing the impact thermal trespass can have on these amazing features."

Last year, a man suffered severe burns when he took a walk off the boardwalk at night without a flashlight and tripped into the thermal water near the cone of Old Faithful Geyser. In that incident, NPS said if it was determined there was any damage done to the geyser cone they would forward the results to the US Attorney's Office for prosecutorial review.