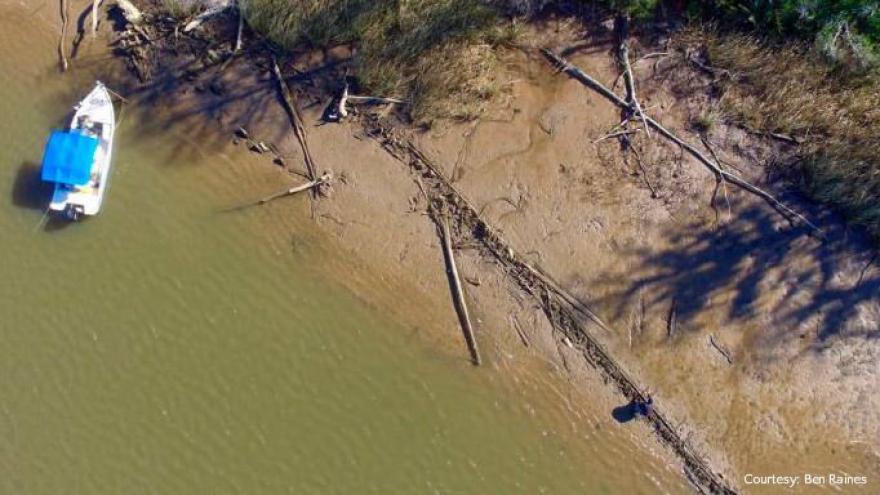 (CNN) -- In a remote river delta on Alabama's Gulf coast, partially hidden under water and mud, may be the answer to a mystery that has baffled scholars for more than 150 years.

If experts' suspicions are correct, it's the long-lost wreck of the Clotilda -- the last known ship to bring human cargo from Africa into the United States.

Its precise location has eluded archaeologists and historians since the vessel was burned in 1860 by slavers seeking to hide evidence of their illegal trafficking. But after the wreck was recently exposed by unusually low tides, AL.com reporter Ben Raines discovered its remains near Mobile and has taken the first step towards verifying its authenticity.

"We did not see anything on the site that would say it's not the Clotilda," said Gregory D. Cook, assistant professor of maritime archaeology at the University of West Florida. Raines brought Cook and several other experts to examine the wreck and all agreed that its remains match historical records of the ship.

"We think it's a very compelling possibility that the wreck could be the Clotilda, but we cannot positively identify it at this point," Cook told CNN.

Still, historians are excited at the prospect.

"It's frankly of world historical importance," said John Sledge, an architectural historian with the city of Mobile. "It's something that's been of great interest, both locally and nationally ... going back more than a century."

The Clotilda had a brief and wretched history.

By the mid-1800s importing slaves into the US had long been illegal, although some smugglers defied the law, especially in the South.

According to historical accounts, the Clotilda made its illicit journey after Timothy Meaher, a local plantation owner, made a bet that he could sneak slaves past federal officials and into the country.

He bought the two-masted schooner and paid a captain, William Foster, to sail it to West Africa and collect 110 slaves from what is now Benin. Foster ferried them back across the Atlantic to Mobile, where he smuggled the ship past authorities in 1860 under cover of darkness.

The captain then navigated the Clotilda up the Spanish River, transferred the slaves to a riverboat and burned the ship, sinking it.

Many of the ship's slaves, freed five years later at the end of the Civil War, settled a community north of downtown Mobile that became known as Africatown. Some descendants of the original slaves still live in the area.

"Any tangible evidence related to the period of slavery in the United States carries a powerful meaning for many people, so if this was the last ship to transport enslaved Africans to this country, that would be a pretty huge discovery symbolically," said Cook, the archaeology professor.

Cook said that if the wreck is proven to be the Clotilda, the descendants of its slaves would be consulted on decisions about its future.

"This would have obvious impacts on them, and we would work with them to get a sense of their feelings, what they would like to see occur with the site, and have them involved in the research as much as they would like to be," he said.

The wreck is partially buried and not much to look at -- a long wooden spine with some planks and iron spikes lying nearby. It's accessible only by boat and lies alongside a marshy island in the lower Mobile-Tensaw Delta, some 12 miles north of Mobile.

It sat underwater before being exposed by extreme low tides caused by the wintry "bomb cyclone" storm system that hammered the Eastern US this winter.

Preliminary evidence suggests it could be the Clotilda. Cook said its type of hull construction matches ships built in the mid-19th century, and the remains of the hull show signs of being burned. And according to Raines its location in the delta is consistent with the one described in Foster's journals. (He's not revealing the wreck's precise location to preserve its integrity and discourage looters.)

For proof, however, archaeologists would likely need to excavate the wreck and examine the contents of its hold for such items as ceramics, which could help pinpoint the time period, or shackles, which could help confirm its use as a slave ship.

Any digging would require state and possibly federal permits.

"We just won't know until we investigate," Cook said.

Sledge, the Mobile historian, hopes confirming the ship's identity will help bring some closure to descendants of its Africatown neighborhood.

"The Clotilda has been the missing piece of that story," he said.