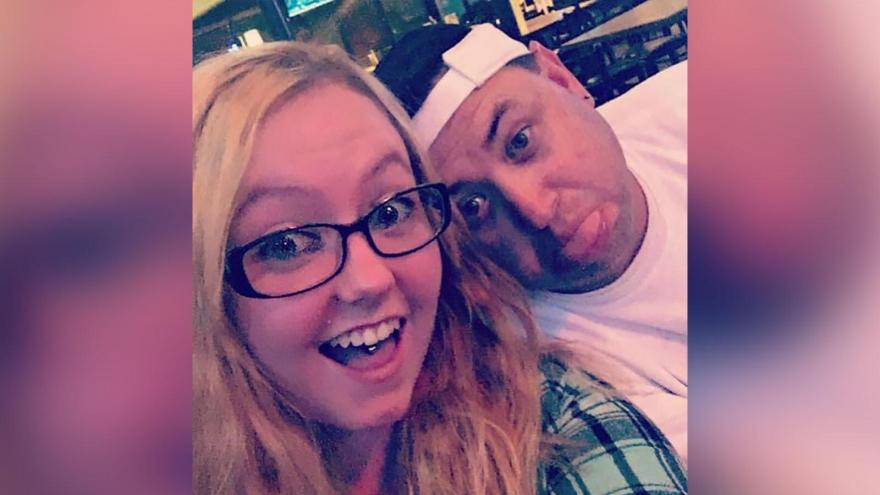 Rikki Olds, with her uncle Bob Olds, was a grocery store manager who was raised by her grandparents.

(CNN) -- Rikki Olds was a vivacious, strong, and independent young woman who worked as a front-end manager at a King Soopers grocery store.

"She was so energetic and charismatic and she was a shining light in this dark world," her uncle Bob Olds said.

On Monday, after a shooting rampage at the supermarket, her family panicked when they couldn't reach her.

"We had to wait and agonize over her fate for several hours," Bob Olds said.

Olds was one of 10 victims gunned down at the grocery store in Boulder, Colorado.

Two other associates of the store -- Denny Stong, 20, and Teri Leiker, 51 -- were among the victims, according to Kroger, which owns King Soopers.

The first police officer to arrive on the scene, Eric Talley, was also among those killed, Boulder Police Chief Maris Herold said.

Both Stong and Olds were graduates of the Boulder Valley School District, Superintendent Rob Anderson said in a statement.

"Several of the other victims were parents of our graduates and given the fact that this is a close knit community, there will likely be many other connections to BVSD schools both amongst those who were killed and other victims," Anderson said.

"While we cannot fathom what would cause such an evil, we know that many in our community acted bravely when faced with unspeakable violence," the superintendent said. Anderson pointed to the actions of first responders and of King Soopers employees who "acted courageously," in trying to get others to safety during the shooting.

"We are eternally grateful for their quick thinking and bravery," Anderson said.

One coworker described Stong as a "wise young man."

"Denny was like an annoying little brother to me. I loved him, we picked on each other but respected each other," said 20-year-old Logan Ezra Smith, who worked with Stong at King Soopers.

"I want people to remember Denny as wise young man, me and him were both big Second Amendment supporters and would go shooting on the weekends, every weekends was a highlight.

"I will miss his smile and his laugh but as well as his honesty. He put you in your place."

Suzanne Fountain, 59, was the sort of person who, when people met her, they felt they "already knew her," friend Helen Forster told CNN's Erin Burnett.

If you were having a bad day, Fountain's smile would cheer you up, said Forster, who had known Fountain since the late 1980s.

"She just would light up the room, and she was a bright light," Forster said. "It's a terrible loss of an incredible human being."

Fountain, an actress who had performed with the Denver Center for the Performing Arts, worked for a nonprofit financial education program, signing seniors up for Medicare, according to Forster.

"All her life really she was about doing service, helping others," Forster said.

"All you had to do is be around her or her give you a hug, and everything was better."

'The most loving person I've ever met'

Flowers, photos, balloons and messages formed a memorial for Tralona Bartkowiak, 49, outside Umba, the Boulder yoga and accessories shop she managed.

Her cousin, who went only by David, told CNN affiliate KCAL that his family watched hours of footage covering the shooting when they found out her car was parked in the King Soopers parking lot Monday. Then, at 3:30 am, her mother called to say Bartkowiak -- who lived in the same home in which David grew up -- was among those killed.

"She helped raise me, she was always there for me," he said. "She was the most loving person I've ever met in my whole life."

The chief also identified the names and ages of the other victims:

A father of 7 was among those killed

Officer Talley ran into danger as the first officer to respond to a call "about a possible person with a patrol rifle," the police chief said.

"I have to tell you the heroic action of this officer when he responded to the scene," Herold said.

The veteran officer is survived by his wife and seven children, his father Homer Talley told CNN affiliate KUSA.

"He loved his family more than anything," Homer Talley said.

Officer Talley's bravery was obvious on his last day of duty, his family said.

"Didn't surprise me he was the first one there," his father said.

Correction: An earlier version of this story misspelled victim Denny Stong's last name based on information provided by the Boulder Police Department.