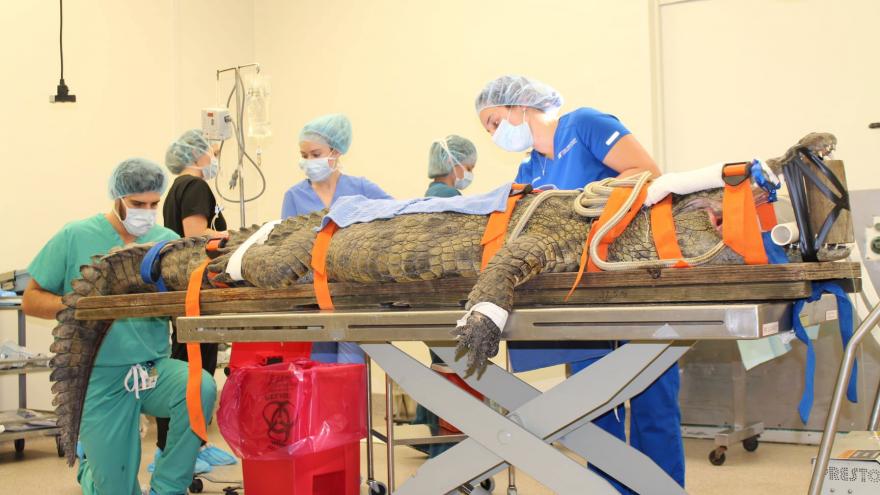 The procedure on the 10.5-foot, 341-pound crocodile was performed after several efforts to dislodge the object were unsuccessful. - From University of Florida College of Veterinary Medicine/Facebook

(CNN) -- A Nile crocodile named Anuket had to undergo surgery in Florida recently.

The problem started in December when a shoe slipped off the foot of a tourist ziplining over the crocodile habitat at the St. Augustine Alligator Farm Zoological Park, according to a social media post from the zoo.

Anuket, who lived in the enclosure with another croc, Sobek, ate the shoe.

Vets at the University of Florida College of Veterinary Medicine performed the surgery on Anuket on February 5 after several efforts to dislodge the object from the 10.5-foot, 341-pound crocodile were unsuccessful, according to the school's Facebook post.

"During her most recent visit to UF, zoo medicine resident Garrett Fraess initially attempted to remove the shoe by reaching his arm up and through the crocodile's esophagus but was unsuccessful," the post said.

"The zoo medicine team then took Anuket for surgery, where Dr. Adam Biedrzycki, a large animal surgeon, attempted to manipulate the shoe through an incision and push it from the stomach to the esophagus, where Fraess hoped to be able to feel and grab hold of the shoe to pull it out. That effort, too, failed."

Dr. Biedrzycki preformed the gastrotomy to make it easier to remove the shoe. This time, the surgery was a success.

After the shoe was removed Anuket was returned to her home and has been recuperating.

"Anuket is recovering well back at our zoo in an off-display area, but her full recovery will take some time before she will be able to rejoin Sobek in the Oasis," the zoo said in a social media post.