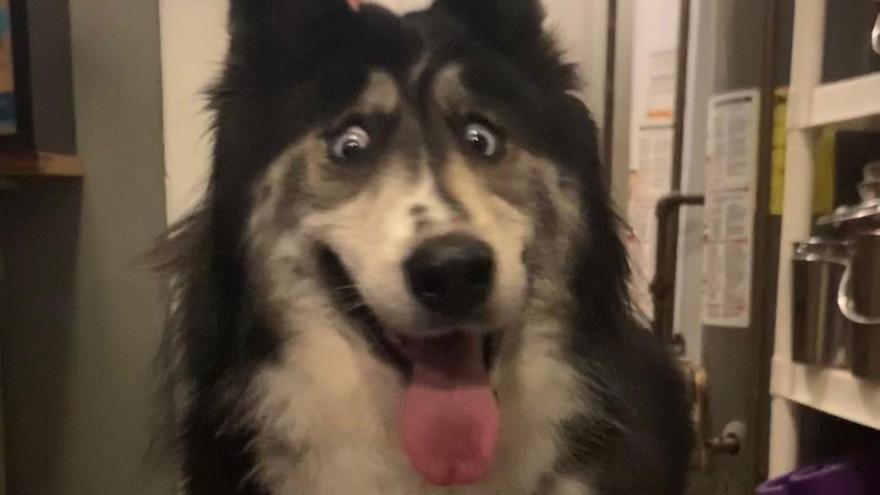 Jubilee, a Siberian husky that was surrendered to a New Jersey shelter because of \"weird\" eyes has been adopted. Credit: Courtesy Husky House/Facebook
By Alaa Elassar, CNN

(CNN) -- A Siberian husky that was surrendered to a New Jersey shelter because of "weird" eyes has been adopted after photos posted on Facebook went viral.

Jubilee, a 4-year-old female pup, has an eyelid deformity that makes it appear as if she's always surprised.

A breeder gave her to Husky House in 2018, telling the nonprofit shelter in Matawan that Jubilee couldn't be sold because she was too "weird" looking.

Despite the congenital issue with her eyelids, Jubilee doesn't suffer from any other health issues.

"She has been thoroughly checked out by our vets," a Husky House representative told CNN. "It does not affect her in any way or slow her down one bit. She is happy and healthy."

But for the past two years, Jubilee has struggled to find a loving family to care for her.

Husky House took to Facebook on Tuesday with a heartbreaking doggy plea for her adoption.

"I came from a 'breeder' who couldn't sell me because he said I was 'weird' looking," the shelter wrote. "Huskies are majestic looking dogs and I don't know why I don't look like them."

"I wish I was beautiful so someone would want me to be their dog."

Caretakers at Husky House were worried the plea wouldn't work, but to their surprise it went viral.

"Since the original Facebook post went viral, we received an overwhelming amount of love, support, and inquiries, including adoption requests," the representative said. "We are so happy to see that everyone feels she is as wonderful as we always knew she was."

Husky House announced on Saturday that Jubilee has found her "forever home" with a family that had previously adopted a dog from them.