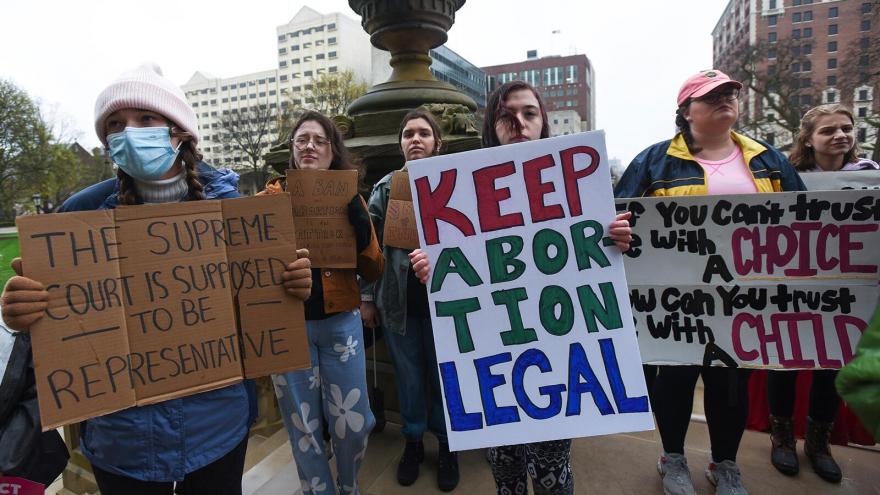 People rally at the state capitol in Lansing, Michigan, on May 2, in support of abortion rights after a draft of the Supreme Court opinion was leaked in favor of overturning Roe v. Wade.

(CNN) -- Abortion rights advocates in Michigan are raising alarms about a restrictive abortion ban put in place in 1931 before the US Supreme Court's 1973 landmark decision in Roe v. Wade.

That law was invalidated by the decision in Roe v. Wade, but it's still on the state's books.

Michigan Democratic Gov. Gretchen Whitmer and other advocates have said that the nearly-century old Michigan state law could go into effect if the Supreme Court overturns Roe v. Wade, making Michigan one of the most restrictive states on abortion access.

In hopes of avoiding that, Whitmer is suing to block the law from going into effect.

The urgency for Michigan advocates to enact protections for legal abortion was underscored last week after Politico reported on a draft Supreme Court majority opinion that would strike down Roe v. Wade.

Meanwhile, Whitmer and the state's Democratic attorney general, Dana Nessel, who has said she won't enforce the years-old abortion ban, are up for reelection in November -- making the midterms all the more crucial for abortion rights advocates.

Michigan, however, isn't the only state with a pre-Roe abortion law still intact that legal experts say could be resurrected and enforced.

The 1931 law that's still included in Michigan's penal code states: "Any person who shall wilfully (sic) administer to any pregnant woman any medicine, drug, substance or thing whatever, or shall employ any instrument or other means whatever, with intent thereby to procure the miscarriage of any such woman" ... is guilty of a felony.

It has an exception to "preserve the life" of the woman, but it does not exclude for rape or incest.

The law threatens abortion providers with prison time, according to the American Civil Liberties Union of Michigan, which -- along with attorneys Deborah LaBelle and Mark Brewer, as well as Planned Parenthood Federation of America -- is representing Planned Parenthood of Michigan in a separate suit challenging the law.

Why did Michigan's governor file a lawsuit?

"Because if Roe is officially overturned by the Supreme Court—which may happen any day now—abortion could become illegal in Michigan in nearly any circumstance, including in cases of rape and incest, because of a 1931 law on the books banning abortion in Michigan," Whitmer said in a statement last week.

The governor's lawsuit, filed in county circuit court, names as defendants several county prosecutors in her state who could potentially enforce the nearly century-old abortion ban.

Using executive authority, Whitmer also asked the state's Supreme Court to immediately consider the case, skipping over the trial court, and whether the state's Constitution guarantees the right to an abortion.

The state's high court has yet to decide whether or not to hear the case.

If successful, Whitmer's lawsuit could result in the state's old abortion ban being struck down, ensuring access to abortion for the state's constituents should Roe v. Wade be overturned.

Planned Parenthood of Michigan, along with a Michigan abortion provider, also filed suit to block enforcement of the state's 1931 abortion ban. The lawsuit, however, is against Nessel, who has said she would neither defend the 1931 law in court, nor enforce it, should Roe v. Wade be overturned.

The lawsuit names Nessel, the state's top law enforcement official, as a defendant, noting that she has to provide legal advice to state agencies, including the department that can impose penalties on physicians, and supervises all county prosecutors who enforce the state's criminal statutes.

The lawsuit seeks a court order that "permanently establishes the ban's unconstitutionality as a matter of Michigan law so that no one can ever use the ban to criminalize abortion in Michigan, no matter their view of the ban's constitutionality," said Hannah Swanson, an attorney with Planned Parenthood Federation of America who's counsel for the plaintiffs.

Are there other efforts to overhaul the law?

The nearby Wisconsin also has a pre-Roe abortion ban from 1849 on its books.

The law says "any person, other than the mother, who intentionally destroys the life of an unborn child is guilty of a Class H felony," which is punishable by up to six years in prison and/or a $10,000 fine.

The law also would make it a Class E felony, which is punishable by up to 15 years in prison and/or a $50,000 fine, for "any person, other than the mother" who causes the death of the mother or "intentionally destroys the life" of a "unborn quick child."

The law would not apply to the mother and makes exceptions for abortions necessary for the pregnant person's life. The law could be extended beyond abortion providers, according to Planned Parenthood of Wisconsin's director of legal advocacy Michelle Velasquez.

Could the Wisconsin law go into effect if Roe is overturned?

Anti-abortion groups in the state have said so, while abortion rights proponents have said otherwise.

"We have always firmly believed that the pre-Roe statute puts us in a powerful position to defend life if Roe is overturned," Gracie Skogman, legislative director for the anti-abortion group Wisconsin Right to Life, told CNN.

Planned Parenthood of Wisconsin believes a different statute from 1985 that prohibits abortions after viability of the fetus would continue governing abortion, and that the 1849 law would not automatically go into effect should Roe v. Wade be overturned, Velasquez told CNN.

"But there's also some potential uncertainty about that question," Velasquez said, adding that "we can't just really ignore the risk that someone may try to enforce that law." Should Roe v. Wade be overturned, Planned Parenthood would have to pause abortions until that law is made clear, according to Velasquez.

Like Michigan, Wisconsin also has a Democratic governor, Tony Evers, who is backing efforts to overturn the state's 173-year-old criminal abortion ban, and a Democratic attorney general, Josh Kaul, who has said he will not enforce the abortion law. Both Evers and Kaul are also up for reelection this year.

In a statement, Kaul said the "administration will not divert our investigative or prosecutorial resources to the enforcement of a draconian, 173-year-old abortion ban with no exception for rape or incest that has been understood to be unconstitutional for two generations."

But Skogman says enforcement of the law, however, will rest with local district attorneys.

Are other states challenging their pre-Roe abortion bans?

The majority of other states with an abortion ban pre-dating Roe v. Wade still on the books are unlikely to take the same recourse as Michigan or try and repeal their old abortion laws, according to experts CNN spoke to.

These states have Republicans in control of both chambers of the state legislature and the governor's mansion, GOP attorney generals who oppose abortion, and conservative lawmakers who have recently passed other laws restricting abortion in anticipation of the Supreme Court's ruling on Roe.

Experts told CNN that the pre-Roe bans could go into effect if Roe is overturned -- but are unlikely to automatically take effect and the exact process of how they would is unclear.

In Michigan's case, "there is at least the possibility that the law could be directly enforced after Roe is overturned, because there's no court order sitting on it," law professor Rachel Rebouché, the interim dean of Temple University School of Law, told CNN, adding that many of these pre-Roe abortion laws were enjoined by a court as unconstitutional.

State attorneys general could start enforcing these pre-Roe abortion laws, but they would have to issue an opinion or ask a court to vacate that judgment if there had been any litigation, said Ingrid Duran, the anti-abortion group National Right to Life Committee's director of state legislation.

Elizabeth Nash, the state policy analyst for the pro-abortion rights research group Guttmacher Institute, told CNN that it would be more likely that a state's recent abortion ban would go into effect rather than kickstart a new court case around a pre-Roe abortion ban from a century ago.

What about states with trigger laws?

Thirteen states have passed a so-called trigger laws, which are bans on abortion that were passed post-Roe v. Wade and designed to go into effect if it were struck down.

In some cases, the law requires an official such as an attorney general to certify that Roe has been struck down before the law can take effect.

Some states like Oklahoma and Mississippi have passed trigger laws and have a pre-Roe abortion ban still in place.

Oklahoma has also passed a "heartbeat" bill banning abortions after about six weeks and a near-total abortion ban that criminalizes performing an abortion. And Mississippi's 2018 law banning abortion at 15 weeks is at the center of the Supreme Court case Dobbs v. Jackson Women's Health Organization, which challenges the Roe v. Wade precedent.

"If the court overrules Roe and allow states to prohibit abortion, states hostile to abortion rights -- many of which have lots of different criminal laws that are not enforced today related to abortion -- we think that they will essentially have to pick which law is going to be the vehicle to criminalize or prohibit abortion in their state," Elisabeth Smith, the director of state policy and advocacy for the abortion rights Center for Reproductive Rights, told CNN.