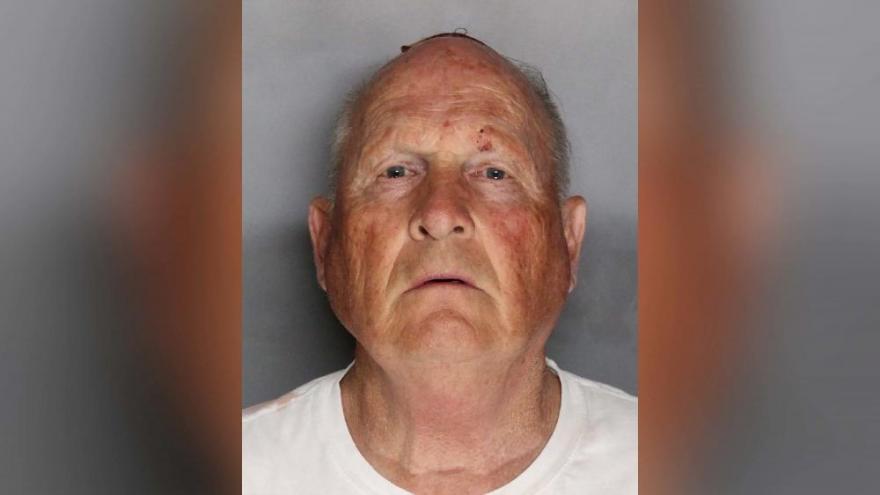 Joseph James DeAngelo, the former California police officer who prosecutors say killed 13 and raped dozens of victims as the Golden State Killer, is expected to enter a guilty plea Monday.

As part of the plea deal, prosecutors from the counties where Joseph DeAngelo committed his crimes read the specifics of each offense, laying out horrific details about him binding, robbing, raping, sodomizing, beating and killing various victims. After one double murder in 1979, a prosecutor said, DeAngelo snacked on leftover Christmas turkey from a victim's fridge and left the bones behind.

"The (surviving) victims in this case have lived far too long with this trauma. They've suffered for far too many years," Ventura County District Attorney Greg Totten said. "Simply put, they deserve to see the defendant die in prison as a convict, and not simply the accused."

DeAngelo pleaded guilty to 13 counts of first-degree murder and special circumstances (including murder committed during burglaries and rapes), as well as 13 counts of kidnapping.

DeAngelo has also been accused of committing more than 50 rapes during his killing spree between 1975 and 1986. He was not charged for the rapes because of California's statue of limitations.

Some rapes took place when the victims' children were home, and in one case, he bound a 3-year-old boy with fabric torn from something in the woman's bedroom. Prosecutors also described a rape while the victim's young daughter was home.

The defendant appeared before Superior Court Judge Michael Bowman at the Sacramento State University Union Ballroom, a venue chosen to allow for social distancing. Dressed in a prison jumpsuit and appearing frail, DeAngelo and his defense team wore clear plastic face guards as they sat on a dais to Bowman's left.

DeAngelo was known by many nicknames. After committing scores of burglaries as the Visalia Ransacker, DeAngelo's crimes became more violent in 1975, with the slaying of Claude Snelling, prosecutors allege.

For the next 11 years, he terrorized communities from Sacramento to Orange County, prosecutors say. Headlines attributed the crimes to the East Area Rapist, the Original Night Stalker and, finally, the Golden State Killer.

He likely will serve 11 consecutive terms of life without parole, with 15 concurrent life sentences and additional time for weapons charges, according to Holliday. He will waive his rights to appeal, she said.

His sentencing is set for August.

The plea benefits the public for multiple reasons, including the time that has passed since the crimes and the prospect of bringing elderly witnesses to testify during a pandemic, she said.

DeAngelo confirmed to Bowman he understood the plea, and confirmed he is making the pleas of his own volition.

In 2018, prosecutors from Sacramento, Contra Costa, Orange, Santa Barbara, Tulare and Ventura counties filed 26 charges against DeAngelo and consolidated the cases against him.

In 1973, DeAngelo began working as a police officer in Auburn, outside Sacramento, and then in Exeter, an hour southeast of Fresno. The Vietnam War veteran spent six years in law enforcement before he was fired for shoplifting dog repellent and a hammer from a drugstore.

He later worked as a mechanic in Roseville, near Sacramento, retiring in 2017. When he was arrested in April 2018, he was in Citrus Heights, the neighborhood where the Golden State Killer raped the first of his known victims in 1976.

DeAngelo's longtime neighbors thought he was odd and reclusive, they said. He yelled at passersby who got too close to his yard or people who mowed their lawns too early in the morning, but there were no signs he was a serial killer, they said.

DNA from a crime scene matched genetic material from one of DeAngelo's relatives, who was registered on a genealogy site, prosecutors said.

While investigators did not immediately link DeAngelo's crimes, patterns began to emerge. For one, if he broke into a couple's home, he would usually tie up the man, place dishes on his back and threaten to kill both victims if he heard the plates fall while he raped the woman.

"Over the years, we heard of homicides down in Southern California, and we thought it was the East Area Rapist," said Larry Crompton, a retired detective for Contra Costa County Sheriff's Department. "But he would not leave fingerprints, so we could not prove, other than his (modus operandi), that he was the same person. We did not know anything about DNA."

Investigators in 2001 were able to link via DNA evidence the crimes of the East Area Rapist and the Original Night Stalker.

They then gathered DeAngelo's DNA on the handle of a car door and a tissue in his garbage can, which matched the DNA from the crime scenes.