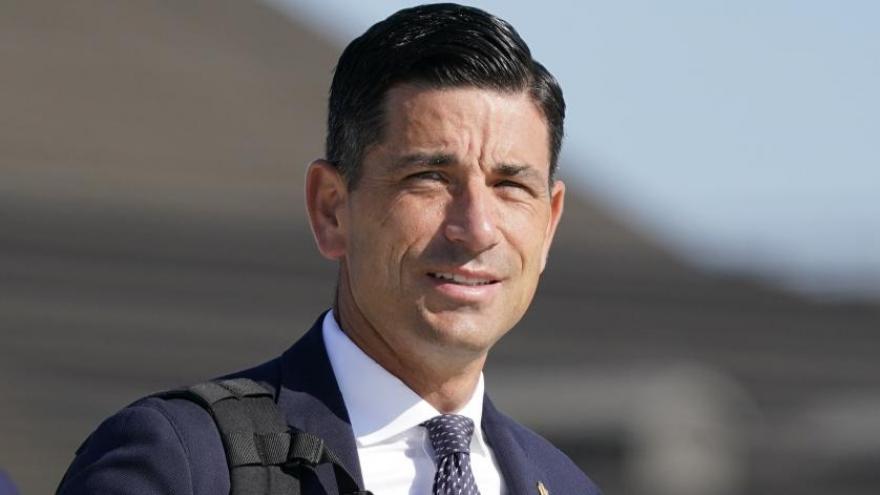 Acting-Secretary of Homeland Security Chad Wolf said QAnon is not a "significant" threat to the US, but he condemned the fringe conspiracy theory when pressed on his stance.

(CNN) -- The Department of Homeland Security's acting secretary on Sunday said QAnon is not a "significant" threat to the US, but he condemned the fringe conspiracy theory when pressed on his stance.

"When I look at all the threats facing the homeland, this is not one that rises to a significant level," Chad Wolf told CNN's Jake Tapper on "State of the Union."

"There are many other threats, here domestically as well as overseas, and we'll continue to look at those and address those," he continued. "So I can't comment and not going to comment on every fringe element, fringe group out there. There are many."

QAnon's prevailing conspiracy theories -- none based in fact -- claim that dozens of Satan-worshipping politicians and A-list celebrities work in tandem with governments around the globe to engage in child sex abuse. The group also peddles conspiracies about coronavirus and mass shootings -- none grounded in reality. Followers also believe there is a "deep state" effort to annihilate President Donald Trump.

Wolf told Tapper that he does not have "any reason" to disagree with the FBI's assessment that the group is a domestic terror threat.

"I don't have any reason to believe anything different from the FBI," he said.

And pressed by Tapper on whether Wolf condemned QAnon based on the violent actions of some of its adherents, including kidnapping, murder and attempted assassinations, Wolf said he did.

"Absolutely. Any individual group that's kidnapping, murdering, doing any number of criminal and illegal attacks ... I absolutely condemn them," he said.

Trump embraced followers of the fringe group last week, praising them for supporting him and shrugging off its outlandish conspiracies, while Vice President Mike Pence dismissed the group when asked about it by CNN.

"I don't know much about the movement other than I understand they like me very much, which I appreciate," Trump said in the White House briefing room.

"I have heard that it's gaining in popularity," Trump said, suggesting QAnon followers approved of how he'd handled social unrest in places like Portland, Oregon. "I've heard these are people that love our country and they just don't like seeing it."

His comments reflect high-profile support for some followers of the conspiracy theory, which has infiltrated Republican circles even as party leaders attempt to distance themselves.

Pence, meanwhile, told CNN's John Berman on "New Day" on Friday that he didn't know "anything" about the group.

Pence and other Republicans have increasingly faced questions about the conspiracy theory as candidates who embrace it have won party nominations.

While some Republicans spoke out against candidates like Marjorie Taylor Greene in Georgia after her primary victory, many didn't comment. House Majority Leader Kevin McCarthy's office, though, said Greene would be welcomed into the caucus.

McCarthy also told Fox News last week that "there is no place for QAnon in the Republican Party" and said Greene had disavowed the conspiracy theory. Greene told Fox News last week following her primary win that while she once read and discussed QAnon topics, she decided to "choose another path" after encountering "misinformation."

Few sitting Republicans have been as outspoken as Rep. Adam Kinzinger, who said the conspiracy has no place in Congress. And Trump, who throughout his political career has embraced a variety of conspiracy theories, congratulated Greene, calling her a future Republican star.

Sen. Mark Warner, vice chairman of the Senate Intelligence Committee, said Sunday that the committee has not yet had "an official brief" QAnon, but told NBC's "Meet the Press" that "the (intelligence) community is fairly clear that this is a fringe group" that they see as "potentially a threat."

The Virginia Democrat called the President's apparent embrace of some of his followers who believe the conspiracy theory "very bizarre."

"These guys are whack jobs and the President ought to disavow them," Warner said.