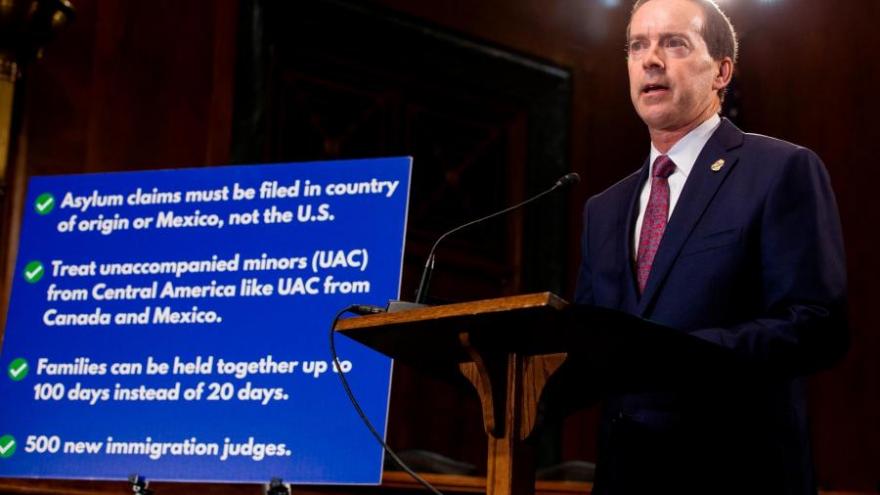 Customs and Border Protection acting Commissioner John Sanders speaks at a news conference on May 15, 2019 in Washington, DC.

(CNN) -- Acting Customs and Border Protection Commissioner John Sanders is resigning, he said in a message sent to agency employees Tuesday, amid the dramatic increase in the number of undocumented migrants crossing the border, a fight over how to address it and controversy over how children are being treated.

"Although I will leave it to you to determine whether I was successful, I can unequivocally say that helping support the amazing men and women of CBP has been the most fulfilling and satisfying opportunity of my career," Sanders writes. His resignation is effective July 5.

Acting Immigration and Customs Enforcement Director Mark Morgan is expected to take over as Customs and Border Protection in an acting capacity, according to a Department of Homeland Security official. Sanders's resignation as acting head of CBP comes amid a crush of migrants at the border that has overwhelmed facilities. Earlier Tuesday, CBP held a call with reporters on squalid conditions at a Border Patrol facility in Clint, Texas.

Officials conceded that children should not be held in CBP custody, noting that the agency's facilities were designed decades ago to largely accommodate single adults for a short period of time.

Over the weekend, President Donald Trump called off planned raids by US Immigration and Customs Enforcement, saying deportations would proceed unless Congress finds a solution on the US-Mexico border within two weeks. Before it was postponed, Mark Morgan had publicly confirmed an operation targeting migrant families and others with court-ordered removals was in the works.

Morgan, a vocal proponent of the President's efforts, was another of Trump's picks to lead ICE after abruptly pulling the nomination of Ron Vitiello.

Morgan briefly served as Border Patrol chief during the Obama administration before leaving the post in January 2017. He previously spent two decades at the FBI. He is expected to return to Customs and Border Protection, which encompasses Border Patrol.

Sanders assumed the post after Kevin McAleenan, the former commissioner, moved up to fill the role of acting homeland security secretary in the wake of Kirstjen Nielsen's ouster this spring. In his role, Sanders has overseen the agency responsible for policing the US borders and facilitating legal trade and travel. It is also the frontline agency dealing with the surge of migrants at the southern border.

Robert Perez, the highest-ranking career official, is the current deputy commissioner. It is unclear if he will step into the acting commissioner position.

Before becoming acting commissioner, Sanders, served as the Chief Operating Officer at CBP, where he worked with McAleenan to address the operational needs of the agency and work on strategic direction.

Sanders did not provide a reason for his departure.

As some of you are aware, yesterday I offered my resignation to Secretary McAleenan, effective Friday, July 5. In that letter, I quoted a wise man who said to me, "each man will judge their success by their own metrics." Although I will leave it to you to determine whether I was successful, I can unequivocally say that helping support the amazing men and women of CBP has been the most fulfilling and satisfying opportunity of my career.

I've spent a significant amount of time over the last several days reflecting on my time at CBP. When I began this journey, Commissioner McAleenan charged me with aligning the mission support organizations and accelerating his priorities. Easy enough, I thought. What I didn't appreciate at the time was how the journey would transform me professionally and personally. This transformation was due in large part to the fact that people embraced and welcomed me in a way that was new to me -- in a way that was truly special. To this day, I get choked up when speaking about it and I can't adequately express my thanks. As a result, let me simply say I will never stop defending the people and the mission for which 427 people gave their lives in the line of duty in defending. Hold your heads high with the honor and distinction that you so richly deserve.

Throughout our journey together, your determination and can-do attitude made the real difference. It allowed CBP to accomplish what others thought wasn't possible...what others weren't able to do. And even though there is uncertainty during change, there is also opportunity. I therefore encourage everyone to reflect on all that you have accomplished as a team. My hope is you build upon your accomplishments and embrace new opportunities, remain flexible, and continue to make CBP extraordinary. This is your organization...own it! Don't underestimate the power of momentum as you continue to tackle some of this country's most difficult challenges.

I will forever be honored to have served beside you. As a citizen of this great country, I thank you for your public service.

Take care of each other,