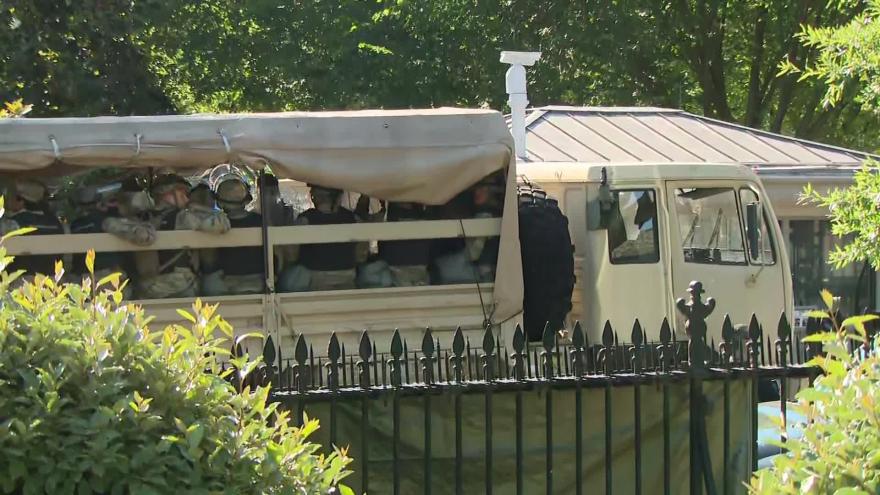 About 9 military style trucks have rolled through the White House complex and onto Pennsylvania Ave on Monday. They\'re all filled with National Guard troops. Credit: CNN
By Barbara Starr and Ryan Browne, CNN

(CNN) -- An active duty military police battalion consisting of some 200 to 250 military personnel is now in the process of deploying to Washington, DC, and could be in the nation's capital as soon as tonight, three US defense officials tell CNN.

The troops are expected to provide security but not perform law enforcement duties such as the arrest and detention of protesters, according to the officials.

Trump is making the move as cities across the country struggle to deal with protests, looting and rioting that began last week after the death of George Floyd, an unarmed black man who was being taken into police custody in Minneapolis. In the days since, as protests have spread throughout the country, officials and lawmakers have claimed extremist groups on the right and left are using the upheaval to foment violence and further unrest.

Two defense officials said the troops will be coming from a unit at Ft. Bragg in North Carolina.

Because of Washington's unique status, the deployment can be authorized by federal officials rather than the city's authorities.

The Pentagon did not immediately respond to a request for comment.

Trump signaled the move in a call with governors earlier Monday in which he promised a demonstration of "total domination" in Washington, as he railed at the state leaders for looking "weak" and pushed them to call in the National Guard to "dominate" protesters and wished there was an "occupying force" in cities across America.

"We're going to clamp down very, very strong," Trump said. "The word is dominate. If you don't dominate your city and your state, they're gonna walk away with you. And we're doing it in Washington, in DC, we're going to do something that people haven't seen before. ... But we're going to have total domination."