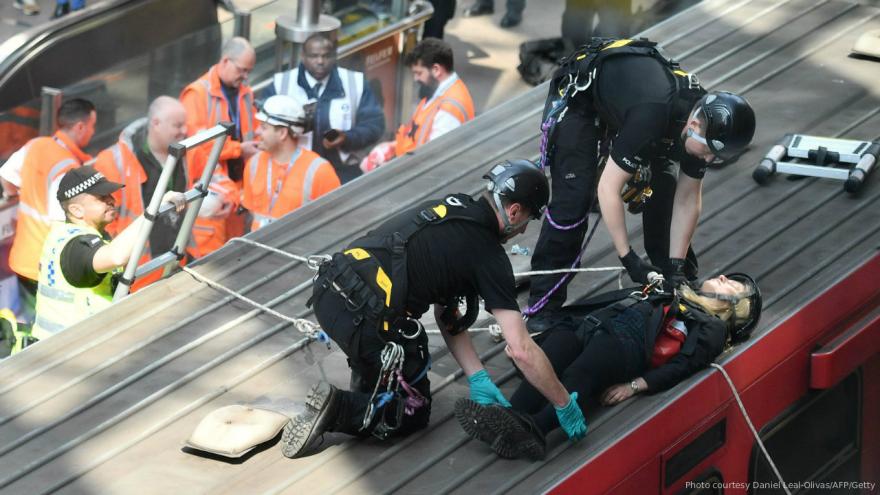 (CNN) -- Climate change activists have demonstrated in London for the third straight day, as two protesters glued themselves to the roof of a train, others shut down major traffic routes and police confirmed they have made more than 300 arrests since Monday.

Demonstrators have blocked some of central London's main traffic arteries since Monday -- including at Marble Arch, Parliament Square, Oxford Circus and Waterloo Bridge -- and on Wednesday began a day of "light" disruption of the city's overground train network.

A pair of demonstrators at Canary Wharf station, in the heart of one of London's financial districts, glued themselves to the roof of a train and also unfurled a banner reading "Climate Emergency."

Police officers then climbed up onto the train to unstick the protesters, who were put into harnesses and gently lowered by the police to the station floor.

A third protester, who had glued his hand on the side of a train, was removed after a short-lived, yet polite, protest.

XR said that Wednesday's transport disruption is called "The Pause," which aims to "create moments in time when humanity stops and fully considers the extent of the harm we have done and are doing to life on earth."

The Wi-Fi network at underground stations in London has been switched off in an effort to prevent climate change activists from coordinating their protests, Britain's Press Association reported.

While spirits remained high among protesters, authorities expressed some weariness with the demonstrations. Mayor Sadiq Khan told Sky News that he was frustrated that protesters had disrupted London's transport system.

"I'd say to the organizers: Please work with the police, please work with TFL (London's travel authority), to make sure you minimize disruption caused to those trying to get about their business in our city," he said.

His comments come after the New West End company, which represents 600 retailers and restaurants in London, said retailers lost £12 million ($15 million) in two days of protests.

London's Metropolitan Police confirmed that they have arrested 340 people since demonstrations kicked off on Monday.

The police have imposed a 24-hour ban on protesting in Parliament Square after protesters blocked roads nearby. A ban on demonstrating has also been renewed for three more days at Oxford Circus while a prohibition at Waterloo Bridge remains active. Police have told protesters to continue any demonstrations at Marble Arch.

With the orders in place, XR was braced for further arrests, as protesters returned to Oxford Street and continued their blockade of Waterloo Bridge.

On the bridge, demonstrators created a street party atmosphere in the British spring sunshine. For most of the day, the air was filled with music, singing and conversation. Signs reading "The climate is changing, why aren't we?" and "People and planet vs. profit" lined a makeshift campsite where a vegetarian diner, second-hand book shop and sleeping area have been set up.

A truck parked on the bridge has become an improvised concert stage where artists come and perform periodically. Farther along, a tent has been set up for mothers with young children.

XR say this set of protests will take place in at least 80 cities and more than 33 countries, including the US,Denmark and Australia. The organizers hope London's protests will continue for two weeks.

Sixty-two people were also arrested at an offshoot protest near New York's City Hall at the base of the Brooklyn Bridge on Wednesday.

Back in the UK, the group, which was founded by British activists, has three aims: to get governments to declare a "climate emergency," reduce net greenhouse gas emissions to zero by 2025 and for citizens' assemblies to lead the government on climate and ecological justice.

It has been supported by a slew of academics, scientists and celebrities -- including former Archbishop of Canterbury Rowan Williams, British actress Emma Thompson and American actor Willem Dafoe -- and claimed that more than 3,000 people would take part in Wednesday's protests.

In Oxford Circus, dozens of activists flocked around a bright pink boat, daubed with the words "Tell the Truth," as police vans gathered at the corner.

"I have never been arrested or charged before, so this is new for me," Kate Bull, 58, told CNN as she locked arms with another activist she only met an hour before -- bracing for any new round of arrests.

Behind the boat, Daniel Williams, a 41-year-old tradesman who traveled down from Wales to take part in the protests, told CNN that he had "never been an activist before." Everything changed when a friend told him last year about XR.

"Years of one day marches and writing to your MPs has only led to CO2 emissions going up by 60% since the 1990s," Williams said. "We don't want to disrupt people's lives, but it is the only way we can get heard," he said.

The genteel crowd of protesters, which included university students, professionals who took time off work, and retirees, was testament to XR's appeal. At least three people told CNN that it was the first time they had protested.

Bystanders are encouraged to join the protest, which includes a "Welcome tent" -- replete with legal advice and sign-up sheets -- as well as a "Wellness tent", which has snacks, hot water bottles and a sleeping area.

"I feel the climate is not getting the attention it deserves," Oliver Cowden, 20, told CNN. He had come to protest alongside his mother, Tamsin, who had locked herself onto the side of the boat.

Susannah Trevelyan, who claimed to be the great, great, great granddaughter of English naturalist Charles Darwin, told CNN said that she was willing to be arrested for the cause. Adding that if Darwin were alive today, he would be "appalled by the huge extinction we are causing ... the worst extinction event in 65 million years."

By Wednesday afternoon, the crowd's size had swelled to the hundreds as police officers attempted to remove protesters who had locked arms under and around the boat.

"Police are moving in at #OxfordCircus -- please come and support if you can!" XR wrote on Twitter.

Williams, who started an XR branch in Aberystwyth, Wales, added that the group's non-violent demonstrations were inspired by civil rights giants like "Martin Luther King, Gandhi and the Suffragettes.

"We are going to stay here [Oxford Circus] for as long as it takes," he added.