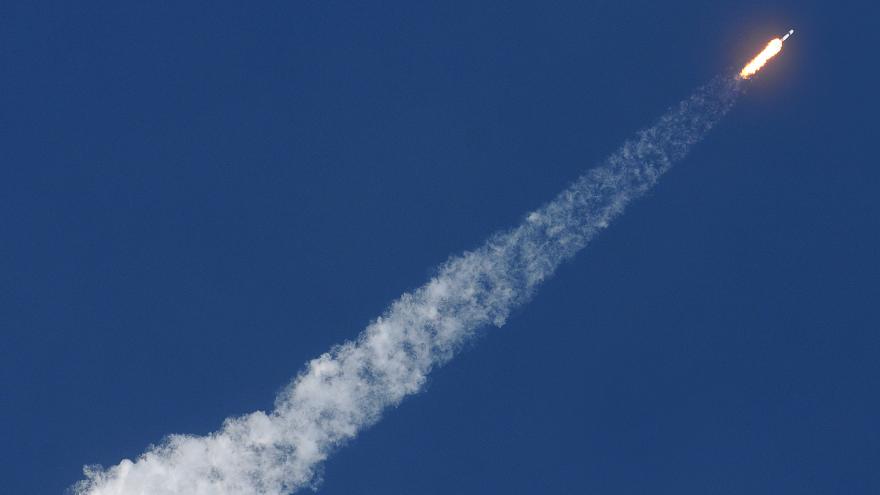 By Jackie Wattles, CNN Business
(CNN) -- Adidas is one of the latest companies to send materials to the International Space Station in the name of science. Or, in this particular case, more comfortable footwear.
Dozens of pellets made from the same plastic that Adidas melds into the soles of sneakers will arrive at the International Space Station after SpaceX launches the experiment Friday at 11:50 pm ET from Florida's Cape Canaveral Air Force Station.

The pellets will be packed among 4,500 pounds of supplies. Over the past decade, NASA has worked with SpaceX to launch thousands of pounds of food, toiletries and other items that sustain the astronauts living aboard the International Space Station —but often packed among the cargo are some brand-name research experiments.

Adidas's plastic pellets will be made of two different polymers — meaning they have slightly different molecular structures — and astronauts will watch how they behave in microgravity, Adidas says this will give its researchers a better understanding of the materials.The goal is to design shoe soles that can provide "new performance and comfort benefits for our athletes," Henry Hanson, a mechanical engineer at Adidas, said in a promotional video.

Will athletes feel a significant difference in their footwear because of this research? Only time will tell.

But Adidas is leaning into the experiment as a marketing opportunity.

It unveiled a line of $180 "Space Race" sneakers when it announced a partnership with the ISS National Lab last year, declaring it would conduct the first-ever footwear research in space. The shoes have iridescent soles and an ISS National Lab patch on the tongue.

Such a space-related marketing tactic isn't new: When Budweiser sent barley seeds to the space station in 2015, the company posted claims online that it planned to brew the "first beer on Mars." In July, Nickelodeon sent up a glob of green slime to the space station as part of a publicity campaign by the children's television network to encourage young students to pursue science, tech and engineering fields. Nickelodeon said it plans to capture video of how the slime moves in microgravity, and the material will be used to develop a curriculum for young students, the company said.

Efforts to drum up hype don't mean that these projects are without scientific merit, said Patrick O'Neill, the head of marketing and communications for the ISS National Lab.

The government-funded organization says its mission is to encourage private-sector research on the space station and fill up room on resupply missions that NASA makes available at no cost to academics, commercial companies and other organizations. Companies pay only the cost of designing and packaging their experiments, and NASA allows them to own the intellectual property for whatever results.

Pharmaceutical companies have been sending drug research to orbit since the Space Shuttle era. The ISS has hosted more than 200 research projects from private entities, including at least 50 from commercial companies. Delta Faucet, theshowerhead manufacturer, also packed an experiment onto the spacecraft that SpaceX will launch Friday.

ISS National Lab is charged with reviewing the proposed projects to ensure they have a legitimate research purpose.

O'Neil acknowledged that some companies are interested in marketing as much as gaining new knowledge. "That's the reality," he said.

A promotional bent isn't necessarily a bad thing. As O'Neill sees it, any interest in space-based research is good for the overall industry and can inspire a new generation of scientists and astronauts.

For its part, NASA keeps much of the branding and promotion at arms-length through strict merchandising guidelines. (Adidas does not use NASA logos on its "Space Race" shoes or in promos, only the ISS National Lab emblem.)

"Corporate sales are not part of NASA's mission," Hertzfeld added.