Adults could rock themselves to better sleep and memory, study says 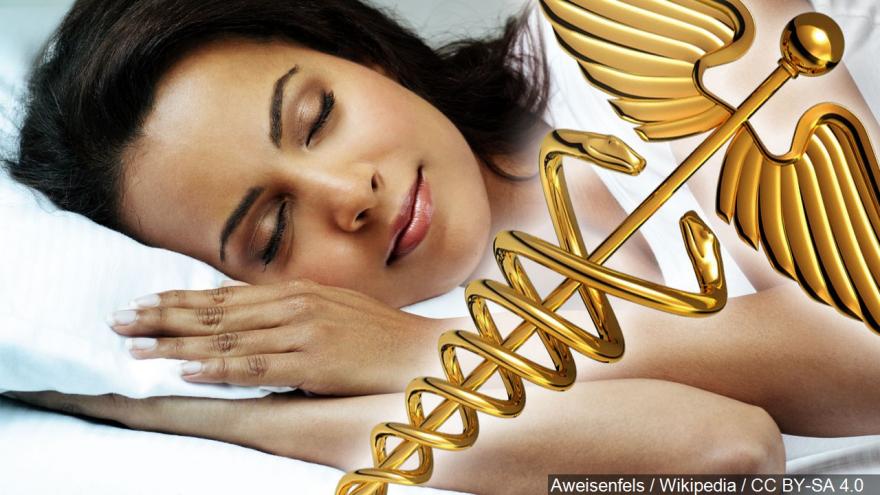 (CNN) -- Insomniacs may need to return to their earliest remedies for a good night's sleep: A bed that gently rocks like a cradle helped a small group of adults sleep better and longer, a study published Thursday in Current Biology found. Add to that, a night tucked into the adult-cradle also improved their memories.

"Compared to a night spent on a stationary bed, our subjects fell asleep faster and spent more time in deep sleep," Laurence Bayer, senior author of the study and a senior researcher and biologist at the University of Geneva, wrote in an email.

Eighteen participants in their 20s slept one night on a motionless bed and another night on an identical, though gently rocking, bed. The full-size rocking bed, which rests on a platform suspended within a metal frame, is connected to a motor. The motor produces a sideways movement spanning 10.5 centimeters (a little more than 4 inches), with a complete back and forth motion made every four seconds. Though the motor is quiet, the researchers switched it on both nights so that participants could experience an equal amount of environmental noise each time.

Throughout the night, soundless machines measured the electrical activity in their brains, hearts and muscles and monitored their breathing and eye movements. Before bedtime, participants performed a memory test. They repeated the same test in the morning while answering a sleep quality questionnaire.

When sleeping in the stationary bed, for example, participants took 6.5 more minutes, on average, to enter the deeper, restorative phases of sleep and, once there, spent 5% less time in those stages, the results showed.

Participants also got "a boost in brain oscillations" when they dozed in the adult crib, Aurore Perrault, a study co-author and former junior researcher at the University of Geneva, wrote in an email.

"We found that the continuous rocking motion helped to synchronize neural activity in the thalamo-cortical networks of the brain, which play an important role in both sleep and memory consolidation," she said. In fact, the test results showed slightly better memory skills after a night rocking compared with a night of stillness.

The findings may contribute to the development of treatments to help troubled sleepers, in particular, older folks who complain of insomnia and poor memory, said Bayer and Perrault, who is now a post-doctoral neuroscience researcher at Montreal's Concordia University.

Natalie D. Dautovich, an environmental scholar for the National Sleep Foundation, said the experimental design of the study was "effective."

Although the improvements in sleep may appear small, "they can add up over time," said Dautovich, who played no part in the experiment.

"This research highlights the important role of our environment in promoting or hindering healthy sleep," said Dautovich, who is also an assistant professor in the psychology department at Virginia Commonwealth University.

Her own research has investigated other sensory experiences during sleep, such as light exposure. "Even if we don't perceive the effects of our immediate bedroom environment or external surroundings on our sleep, there can be subtle to large impacts based on our sensory experiences," she said.

The new study participants were skeptical at first, Perrault said, but they "forgot about the motion after several minutes of rocking." All described the gentle swaying as "pleasant and relaxing," while some even "fell in love" with the adult-size cradle and wanted to bring it home.

Sadly, the researchers would not allow that, though an unrelated commercial rocking bed, costing upwards of $3,000, is available. A hammock, although "probably not as efficient," might also do the trick for those wanting to rock the night away, Bayer suggested: "People often report a sense of relaxation when rocked in a hammock."