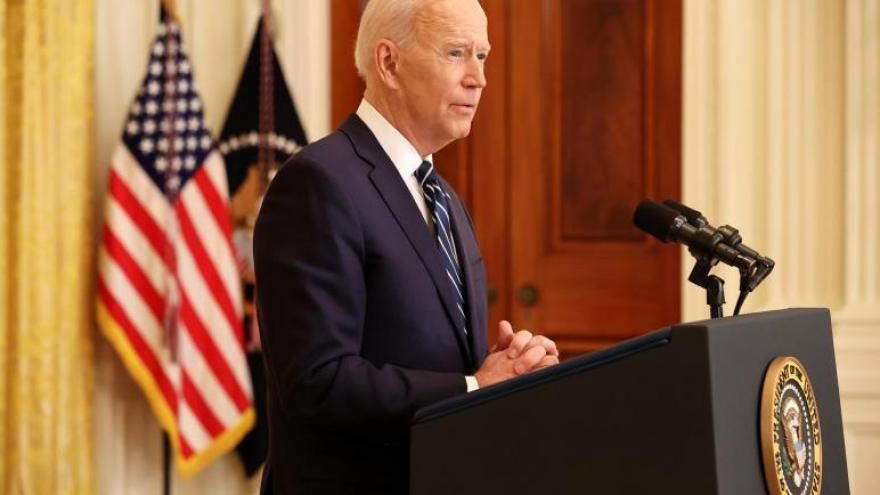 (CNN) -- Talia Kaganovsky has struggled with her mental health for years. But when Covid-19 hit, "it was almost like a giant slap in the face," the 18-year-old freshman at University of Pittsburgh said.

Kaganovsky, like all Americans, had to readjust her habits and expectations when the pandemic began a year ago. For many high school seniors, that meant realizing there would be no high school graduation or the quintessential freshman year of college. But the coronavirus pandemic also meant she would have to create new ways to cope with her mental health. "I've been dealing with mental health for a pretty long time now, but only recently started looking into treating and coping more with it," Kaganovksy told CNN.

"I was starting to do really well, and then all of a sudden it was like I lost all of the coping mechanisms that I had discovered before."

Kaganovsky is among the many young Americans who have struggled with their mental health this year.

More than half of 18- to 29-year-olds reported feeling symptoms of anxiety or depressive disorder in the last month alone, according to data from the CDC. Mental health advocates and experts are calling on the federal government to address the issue.

"Now is an important time to remind [the Biden administration] to the extent we can that mental health is part of health care," he said.

The Biden administration has said it is both taking note and taking action. The President's Covid-19 relief package, signed into law earlier this month, includes increased funding for mental health services such as funds for the National Child Traumatic Stress Network, youth suicide prevention and pediatric mental health care access.

For his part, Education Secretary Miguel Cardona says he aims to place a renewed focus on mental health when reopening the country's K-12 schools.

"We need to recognize the emotional impact this had on our students, and we need to be prepared when we re-open schools to ensure that social emotional supports are a bigger part of the whole experience," Cardona told NBC's Hoda Kotb on the Today Show last week.

Now, advocates and experts alike are calling on Biden to prioritize the implementation of youth mental health services through increased support programs and research, not only for K-12 students, but for young adults as well.

Like Kaganovsky, Ryan Doucette, also 18 years old and a current senior at Bedford High School in Massachusetts, said the pandemic "disrupted all the activities of senior year."

Doucette, who lost a friend by suicide when he was 14, says he recognized there was a youth mental health crisis years before the pandemic.

Many young people were already struggling with their mental health, Doucette told CNN, but, "Covid-19 as a pandemic has only worsened that, isolating people further."

"Even as Covid vaccines come out, there's not a vaccine for the youth mental health crisis and the administration better be prepared for it," Doucette said.

While the pandemic has immediately impacted young Americans' mental health, experts also warn of future problems. They say the Biden administration has a time sensitive opportunity to address the issue, which could cripple this generation for years to come.

Dr. Susan Borja, chief of the Dimensional Traumatic Stress Research Program at the National Institute of Mental Health, says that in looking back at prior disasters such as hurricanes, pandemics and financial collapses, it is clear that the mental health impact of trauma does not disappear after the isolated incident.

"There is a longer tail of impact," Borja said, adding that for young adults in particular there may be a "developmental impact."

"Based on a long history of all these kinds of events, we expect there to be in the short term, a lot of people reporting they're having trouble," Borja said. It will be likely for young people to report increased levels of general stress, depression and anxiety, she added.

"For most people, those will go away and recede over time without intervention," Borja said, but, "unfortunately there's going to be a portion of people with more enduring chronic illness that will benefit from intervention."

"Unfortunately, we know from other kinds of disasters: war, 9/11, Fukushima, this doesn't go away as soon as people are physically safe again. We know it's coming, which is part of the reason to jump up and down now and say, 'Hey we need to have the infrastructure to deal with not just folks experiencing this now, but folks who will have fall out years from now,'" he told CNN.

Perlis researched the impact of Covid-19 on youth mental health along with John Della Volpe, director of polling at the Harvard Kennedy School Institute of Politics, who has surveyed young Americans for over 20 years.

In the past four years, Della Volpe said mental health has become a defining issue for young Americans.

Meanwhile, Dr. Angela Diaz, director of the Mount Sinai Adolescent Health Center in New York City, works with thousands of young people ages 10 to 26, 94% of whom are youth of color. Many of the youth Diaz serves come from low income communities and are uninsured.

"Imagine if you are a low income kid, who's Black, parents lost job, mom died, just imagine the amount of stress that brings," she told CNN.

"Everything has just been exacerbated. There were major issues before, but since the pandemic, they got much worse. There's much more depression, anxiety, substance use and interpersonal violence. There's the financial impact, lack of food, the racial impact... this was so many different things all at once on these kids, the intersectionality really had a major impact," Diaz said.

Aware of the unique set of challenges facing young Americans today, the Biden administration says it is committed to addressing the rising concerns over young people's mental health.

Before the President took office, the Biden transition team held a Zoom call with young leaders in mid-January focused entirely on youth mental health. The call gave young people the opportunity to speak about their experiences with mental health, and allowed for experts, including policy analysts from groups like the Center for Law and Social Policy (CLASP), the opportunity to present their research.

On that call, Nia West-Bey, a senior policy analyst at CLASP, stressed five areas the Biden administration could prioritize when it comes to mental health including telehealth, removing law enforcement from mental health calls, investments in community based care and investments across all areas where young people are, she told CNN.

"That means not just in schools, but in libraries, parks and rec, community based organizations," West-Bey said.

West-Bey also emphasized to the Biden transition team that young people need to be centered in conversations about the services meant to benefit them.

According to Arielle Geismar, a 19-year-old student at George Washington University who also participated in the Biden team youth mental health call, the call gave young people dealing with mental health a place to voice their concerns.

Geismar lost a friend by suicide in high school and has advocated for youth mental health support ever since.

"There are times when it feels like the whole world is closing in, and I'm supposed to be doing math homework. We're living in multiple crises right now, and it's scary. This is confusing and there's no guidebook on living through these times," Geismar told CNN.

"There have been spaces previously created [by Biden] for young people to voice our concerns and I hope to see those continue," Geismar said, adding that the Biden administration could build a public resource campaign on social media to promote the resources available to American youth, in addition to beefing up funding for mental health resources in public schools.

According to Geismar, she believes the campaign could help to de-stigmatize mental health and would let young people know that Biden is on their side.

"The President has been clear that expanding access to mental health care, including for youth, is a priority and we look forward to sharing more in the months ahead," Kevin Munoz, a White House spokesperson, told CNN.

For her part, first lady Jill Biden, an educator, has stressed the importance of focusing on the mental health of students.

In an interview with Kelly Clarkson last month, Biden said she recognizes that students, parents and teachers are all struggling.

"I think when we get back into the classroom, you know, mental health is going to be a big issue. We got to help heal these kids," Biden said.

"I mean kids have been dealing with food insecurity, domestic violence, child abuse, so many things that they're going to be bringing back with them into the classroom, and teachers are going to need help," she added.

And since taking office, Biden announced his Covid-19 Health Equity Task Force, which includes Dr. Octavio Martinez, the executive director of the Hogg Foundation for Mental Health at The University of Texas at Austin, and Vincent Toranzo, a student who serves as the State Secretary of the Florida Association of Student Councils and advocates for the input of student voices in their community.

The inclusion of both a psychiatrist and a student on the task force demonstrates that the White House recognizes mental health as a part of its Covid-19 recovery.

Martinez says he will work to elevate the youth perspective in his role on the task force.

"One of our task force members is an 18-year-old," Martinez told CNN, referring to Toranzo. "I've not seen a task force that has done that before that I've been on personally, so I'm so excited that that was recognized. Too often we're not including our youth voice."

"These are formidable transition times in terms of development," Martinez said, noting that young people develop through building relationships with others and interacting with peers at school. "And so that being taken away from our kiddos this past year and ongoing into 2021 is very concerning," he told CNN.

Martinez said that if the opportunity presents itself on the task force, he will advocate for increased funding from the federal government to support youth mental health.

"If we're not dedicating research dollars as well as additional funds to ensure that there's treatment, that there's access, that there's support, then we're unfortunately not making a difference," Martinez said.