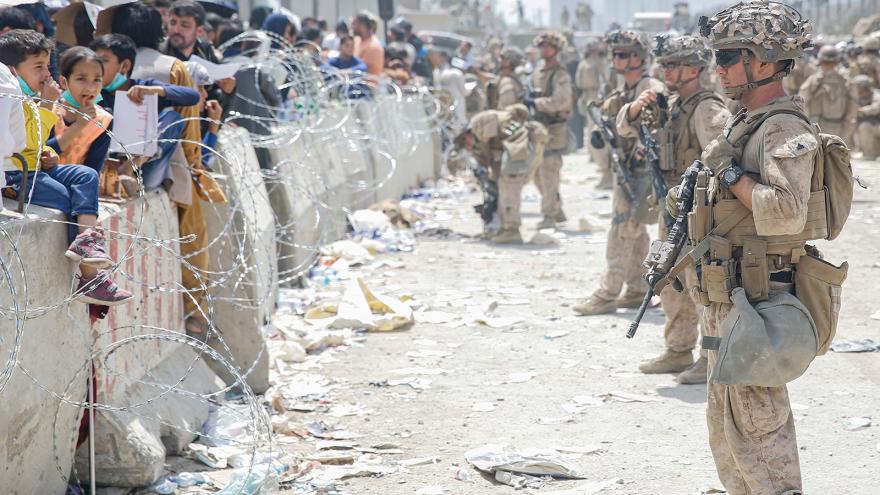 (CNN) -- Afghans who have applied for special immigrant visas to the US were told to stay away from Kabul's airport on Monday, as American officials ramped up evacuation flights and the Taliban said all US forces needed to leave Afghanistan by August 31.

Western countries are now in a frantic race to complete what US President Joe Biden last week called "one of the largest, most difficult airlifts in history," amid harrowing scenes at the airport of tens of thousands of people trying to flee Taliban rule.

Amid the scramble to evacuate, many Afghans have essentially been pushed to the back of the queue.

"We are currently prioritizing American citizens and legal permanent residents for entry," John Johnson, Public Affairs Officer for the US Embassy in Kabul, told CNN Monday. "Due to a deteriorating security environment we are asking all others not to come to the airport at this time -- the gates remain closed."

A source close to the situation at the airport told CNN that while current policy is to only let US and NATO citizens into the airport, they hoped to soon move to permitting applicants for the US' Special Immigrant Visa (SIV) program -- an avenue for Afghans who worked for US forces and agencies to get out of the country -- along with the US embassy's local Afghan staff.

The change in policy at the airport comes as the US has sought to massively ramp up its mission. Some 10,400 people were evacuated from Kabul between Sunday and Monday morning, according to a White House official. It's the largest number in a 24-hour period to date and the first time the administration has exceeded its target of 5,000 to 9,000 daily evacuations. Dozens more US military transport jets were expected to land at the airport Monday.

Since the end of July, the US has relocated 42,000 people out of Afghanistan, Army Maj. Gen. William Taylor said at a Pentagon press briefing on Monday. This includes 37,000 people evacuated since August 14.

G7 leaders are planning to press Biden hard on extending his August 31 deadline for US troops to withdraw from Afghanistan during a Tuesday virtual meeting. Biden has not publicly committed to such a move, worrying some allies who have pushed for an extension and fear there won't be enough time to get their citizens and Afghan allies out.

Biden indicated on Sunday that discussions were underway about the potential for remaining in the country longer, but the Taliban signaled on Monday that they view the August 31 date as firm.

"August 31 is the deadline announced by them. The US must adhere to removing troops from Afghanistan by this date. Otherwise, it will be a clear violation," spokesman Sohail Shaheen told CNN on Monday. He said that if there was a delay, "our leadership will take proper and necessary decisions."

After that date, Shaheen said those who wanted to leave "can do so through usual way of using commercial flights and having proper documents like passports and visas."

UK Defense Secretary Ben Wallace said Monday that British efforts to evacuate people from Kabul "are really down to hours now, not weeks," and forces on the ground must use every moment they have to get people out.

The UK has evacuated a total 6,600 people since August 14, and over 8,000 since April, Wallace told UK broadcasters. But he said people should be honest with "the reality, which is we won't get them all out."

The number of people in and around the airport awaiting evacuation swelled to around 20,000 over the weekend, but had been reduced to around 13,000 on Monday, a source familiar with the situation told CNN.

Most of them are Afghans, the source said, adding that the number of US citizens at the airport was now in the low hundreds.

The airport was increasingly chaotic in terms of who was allowed in, with special forces -- Afghan and American -- looking out for their former Afghan colleagues. "It's quickly becoming the Wild West," said the source. "[Special] operators are pulling people through gates left and right."

Even with the new flight restrictions, thousands of Afghans, mostly military aged males with "no documentation," remained on the airport grounds, the source said. They had arrived on the second day during the "everyone gets in" lapse in filtering entrants.

The source said there were "no plans to kick people off the airport," potentially leaving thousands in limbo.

One reason for the chaos was the decision to issue electronic visas, without names or document numbers, to SIV applicants. The visas were then copied as screenshots and sent by Afghans to thousands of other Afghans who were not eligible for access to the airport, a source told CNN at the weekend.

"I don't think consular, or the administration frankly, realizes how badly they f*****d up by sending that stupid visa and letting everyone in for 24 hours straight," the source said Monday.

Dozens more military planes were due to arrive on Monday. Plans called for 33 US Air Force C-17s to head to Hamid Karzai International Airport in the next 24 hours, said the source. Each of the large four-engine jets has the ability to take 400 passengers out of Kabul, "which should make a decent dent" in the number of people stuck at the airport.

On Sunday, conditions at the airport worsened throughout the day, with its entry gates for the most part closed. There were instances of families being split up and sent to different countries in the chaos.

"I don't know what they were doing, but there is still local staff struggling at the gates and not even being able to get in," a source close to the situation told CNN, referring to Afghans employed by the US.

Families were being separated and sent to different countries, the source added. This was "not by design and not really the fault of US officials, but they're either choosing to come in separately, or getting separated on the way in," they said.

"They've had cases where mom, dad, and children all end up in different countries," said the source.

The chaos continued on Monday morning, when sniper fire killed a member of the Afghan security forces helping secure the base, one source told CNN. The affiliation of the sniper was unclear, the source said.

In the confusion, Afghan forces returned fire, but in the direction of some US Marines, who opened fire themselves, injuring four Afghans, the source said. The four are in stable condition and there were no US casualties.

Almost 20 people are believed to have died from stampedes or gunshots around the airport in the past week.

Seven Afghan civilians died in crushes near Kabul's airport on Saturday, a spokesperson for Britain's Ministry of Defense (MoD) told CNN. One crush took place outside the airport itself while another happened outside the Baron Hotel.

"Conditions on the ground remain extremely challenging but we are doing everything we can to manage the situation as safely and securely as possible," the MoD spokesperson said.

The pace of evacuations from Kabul airport appeared to be picking up on Monday, with planes regularly taking off and long lines of evacuees waiting to board flights.

One Afghan journalist, Qiam Noori, waiting to board a flight to Qatar, told CNN he had mixed feelings about leaving.

"I'm lucky to leave," he said. "But I'm also leaving a whole family behind, a lot of friends."

Noori believes the Taliban would have been unlikely to give him space to live freely. "This is the reality" of life in Afghanistan, Noori said, adding that his heart was already broken.

In the 20 years since the Taliban were pushed from power, millions of Afghans embraced new benefits including increased access to education for women. Now the country's future is getting on planes out of the country.

As one evacuee at the airport told CNN on Monday, Afghanistan is witnessing a total "brain drain."