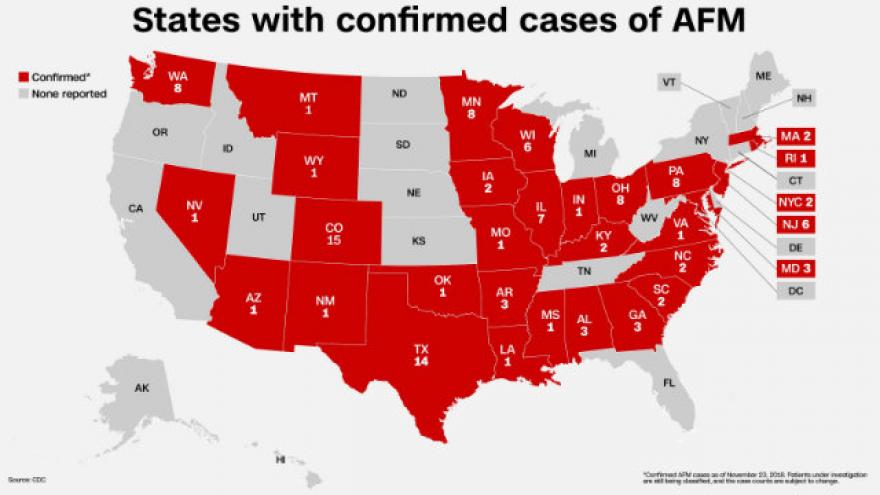 There are now 286 cases of possible and confirmed acute flaccid myelitis in the United States this year, according to the US Centers for Disease Control and Prevention. Photo courtesy CDC/CNN

(CNN) -- There are now 286 cases of possible and confirmed acute flaccid myelitis in the United States this year, according to the US Centers for Disease Control and Prevention.

That includes 116 confirmed cases of the rare polio-like illness, also known as AFM, that leads to sudden onset of paralysis. That's 10 more confirmed cases than the agency reported a week ago. An additional 170 possible cases of AFM are under investigation.

More than 90% of the 440 patients with AFM since 2014 have been children younger than age 4. Most of the children with confirmed cases experienced a viral illness with symptoms including fever and cough about three to 10 days before the onset of paralysis, the CDC said this month.

The patients with confirmed AFM are in 31 states, which the CDC has now identified for the first time. There are 15 cases in Colorado, the state with the highest number, followed by Texas with 14 confirmed cases. Nineteen states have no confirmed cases, and 12 states are reporting only one confirmed case, according to the CDC.

It's not clear whether there is more of a risk of AFM in states that have a higher number of cases or if those states are just better at identifying and reporting patients. Although the CDC has encouraged doctors to report cases, there is no requirement to do so.

Most AFM patients became ill between August and October, and according to the CDC, the number of illnesses has peaked every other fall since 2014.

Even with the rise in cases, according to the CDC, "less than one to two in a million children in the United States will get AFM every year."