After 78 years of waiting, this 97-year-old WWII veteran finally got his high school diploma 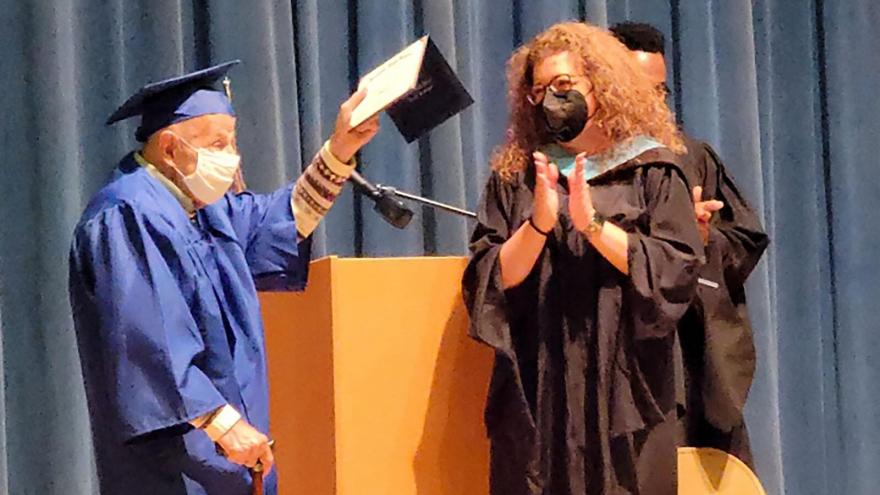 (CNN) -- One high school in Tacoma, Washington, recently honored a former student who wasn't able to get his diploma 78 years ago.

Ernie Reda is not only a World War II veteran, but now an alumnus of Stadium High School, which is located on Commencement Bay.

Ernie was sent to boot camp in 1943, which was supposed to be his graduating year.

From there, he fought in the Battle of the Bulge and took part in the Normandy Invasion, his son Dave Reda told CNN.

Since he missed out on getting his diploma, Ernie's granddaughter, Heather Anderson, had been thinking for about 2 years about how to give her grandfather that recognition.

"It had crossed my mind; it had crossed all of ours minds, but she (Heather) just stayed after it," Dave told CNN.

Then at the beginning of December, Anderson contacted the principal of Stadium High, Shannon Marshall.

She asked if the school would be interested in participating in "Operation Recognition," a program started by Veterans Affairs. It works to recognize those who were drafted and unable to finish high school.

Right away Marshall knew this was something she and the school wanted to be a part of, "It seemed like the most honorable thing to do," Marshall told CNN.

On December 20, the ceremony was held in the original auditorium of the school, which has been there since 1906.

"It was the greatest thing in my life," Ernie told CNN, "The best Christmas present."

Four out of five of Ernie's children were there, along with other extended family members, Dave told CNN.

Speeches were very similar to those given at a typical graduation for the school, with a few bits of rewording to fit the Veterans Affairs standards.

While the wait was decades-long, Ernie was delighted to finally get that paper. "78 years later I got it," Ernie said. "It's about time I did!"

He was also given one of the two remaining copies of the 1943 Stadium yearbook, which the school felt was important to give to him.

When Ernie was discharged in December of 1944, he remembers disembarking the ship about a mile from Stadium High School, Dave told CNN. "It's the first thing I saw," Ernie told CNN affiliate KING5.

Marshall explained that Ernie is still a proud Stadium Tiger and when he arrived he chanted the school colors -- blue and gold.

And while this is the first veteran the school has honored through the program, Marshall says this will certainly not be the last. "It was really a rewarding day and was so special for everyone," She noted.