After a decade in a shelter, a rescue dog named Wiggles finally has a home 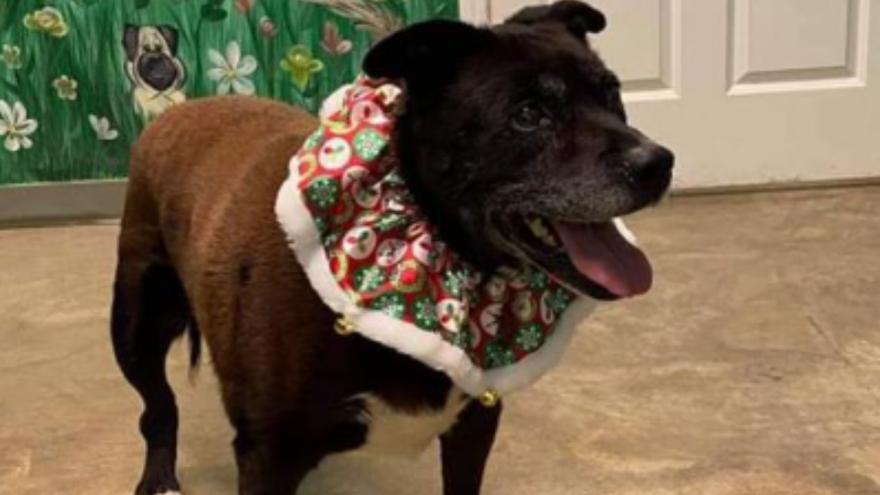 Wiggles, a 14-year-old pit bull mix, was adopted after a decade in an Illinois shelter.

(CNN) -- Wiggles had food, a backyard and plenty of laps to sit on at her animal shelter in Godfrey, Illinois.

But for 11 years, the female pit bull mix was missing one thing -- a family.

That changed this week when Wiggles, now 14 years old, was finally adopted.

"They're perfect," Karla Crane, a dog trainer at 5As animal shelter, said of the adoptive family. "We couldn't ask for anybody better."

Wiggles was brought to the 5As (Alton Area Animal Aid Association) shelter in 2010, when she was 3 years old, Crane said. But she wasn't always friendly.

"When she first came in, she was not a very nice little dog," Crane said.

Because Wiggles wasn't good with humans or other dogs, she was overlooked for adoption.

Eventually, Wiggles warmed up to people. But another obstacle emerged between her and her forever home.

In 2016, Wiggles was diagnosed with a benign tumor the size of a golf ball, Crane said. Over the past four years, it has grown to the size of a cantaloupe. The shelter decided not to operate on the tumor because it's benign and the risk of surgery given Wiggles' age.

Crane said families were hesitant to adopt Wiggles because of her tumor, and because of food allergies that created expenses for medication.

The shelter provided Wiggles with all she needed -- medications, special food and veterinary visits -- for over 10 years.

Until her new family came along.

Wiggles' story is not unique

Now, Wiggles lives in Missouri with a couple that is eager to give her all she needs, Crane said.

The couple had lost two dogs to cancer before adopting Wiggles.

Crane said she's been in contact with the family since adoption. Since Wiggles went home with her new family, Crane said she has been to the veterinarian for her tumor and blood work. The family has also put her on medication for arthritis.

Crane said that Wiggles' time at the shelter, even if long, fits a pattern she sees in dog adoption.

"If a puppy comes in, they're adopted within a month -- sometimes within a week," she said. "Older dogs that come in ... they're the ones that have to stay here until we find a family."

5As is a no-kill shelter in operation since 1956. Crane said each animal gets as much personal attention as the staff can give them.

"I always say there's a family out there for every dog that we have here," she said. "Even the ones that have issues."