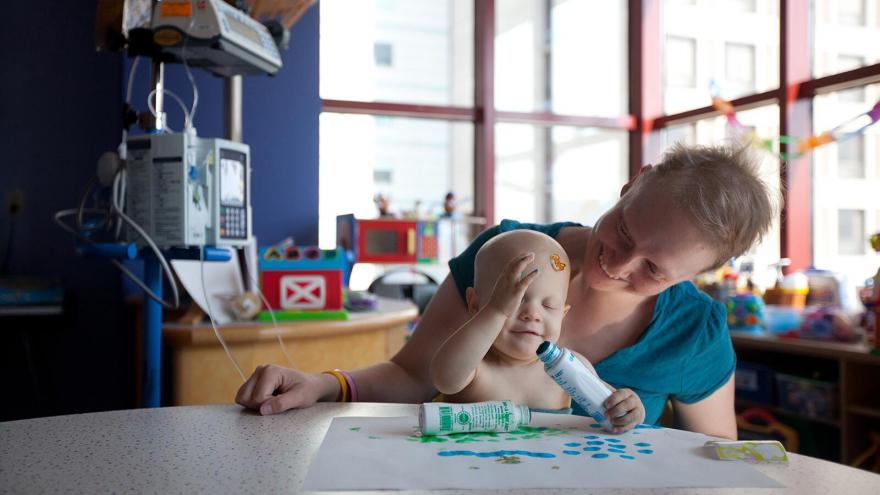 Cancer survivor Kezia Fitzgerald with her 1-year-old daughter Saoirse who was fighting a stage four neuroblastoma tumor. Kezia put her sewing hobby to the test and made a garment that kept Saoise's lines in place, preventing tangling and allowing her to play.

(CNN) -- When Kezia Fitzgerald's 1-year-old daughter Saoirse was fighting a stage four neuroblastoma tumor, Kezia knew she wanted to do everything in her power to make Saoirse's treatment as comfortable as possible.

So when Saoirse's catheters and vascular access lines started getting in the way while she played, Kezia put her sewing hobby to the test. She made a garment that kept Saoise's lines in place, preventing tangling and allowing her to play.

With the input of the doctors and nurses overseeing Saoirse's treatment, Kezia soon perfected a garment that became the talk of the hospital. The garment effectively decreased the risk of line injury and infection, while allowing patients freedom and comfort.

"It made such a difference in our lives as parents," Kezia said. "It was so much a part of our treatment journey."

Though Saoirse passed from her cancer months later, on the good days she was at least able to play normally.

A two-time cancer survivor herself, Kezia's experience being both a patient and caretaker gave her empathy for the struggles of medical treatment. With the success of the garment she made for her daughter, Kezia started thinking about how she could expand her desire to help into other products.

What began as a labor of love for her daughter grew into CareAline, a company dedicated to making medical garments that prioritize patient and clinician comfort and safety.

More than 10 years since the company's inception, Kezia's medical garments are being used in hospitals nationwide, with partnerships at places such as the Children's Hospital of Wisconsin and the C.S. Mott Children's Hospital at the University of Michigan Medical School.

CareAline's latest garments are a product of multiple quarantines. When Kezia's Hodgkin's lymphoma relapsed, she underwent a stem cell transplant, forcing her into a 100-day isolation to protect her weakened immune system. Just three days out of that isolation, the Covid-19 pandemic began and she began another lockdown.

"I was just preparing to be ready to come out of isolation and was seeing the light at the end of that tunnel, and then everybody else had to shut down too," she said.

Despite the emotional exhaustion of fighting cancer and a pandemic, Kezia quickly asked how she could use her company to help keep frontline workers safe.

Because the CareAline manufacturer in Massachusetts was considered an essential business, it was permitted to stay open. Kezia wanted to take advantage of that opportunity to help and spent months meeting with PPE experts and talking to clinicians about what changes they wanted in their medical garments.

"They've saved my life multiple times, they helped treat our daughter, so these are people that we're connected with and that we feel thankful for. We felt like we wanted to help them in return," she said.

From her meetings, Kezia found that while there was a huge movement to help provide masks, isolation gowns were quickly being depleted. And though she could use her company to create the standard disposable gown, she decided to create solutions to the problems mentioned by clinicians.

CareAline's gowns sought to tackle the little problems that can add up to big differences in safety: Kezia added thumbhole cuffs so that wrists can stay covered, gave the gowns a higher neck, and added a Velcro overlapping back, allowing them to be removed easily and safely.

"The changes seem straightforward and simple, but unless you've talked through them with clinicians who are dealing with this every day you might not recognize that these simple changes can make a huge impact on their safety."

Kezia said she sees these changes as a way to deliver medical benefits, personal benefits, and environmental benefits.

Tests of CareAline's isolation gowns found they could be washed 100 times, giving them 100 times the longevity of standard disposable gowns. In a study done by the National Institute of Health, reusable gowns were shown to provide increased protection and significant cost savings for hospitals.

"The medical industry produces a lot of waste because so much of it is single-use in order to be sterile. If there's a way we can find that allows for something to be reused, why wouldn't we do it that way?"

Despite the exhaustion of undergoing multiple cancer treatments, Kezia says she is powered by testimony from patients saying she's helped their lives feel a little more normal and a little safer.

"For me, being in and out of cancer treatment for 10 years, I learned that I had to make my treatment a part of my life and not design my life around my treatment. When we hear comments that people were able to go back to school, go to work or hug their grandkids, those are the stories that make me feel like we're moving the needle."