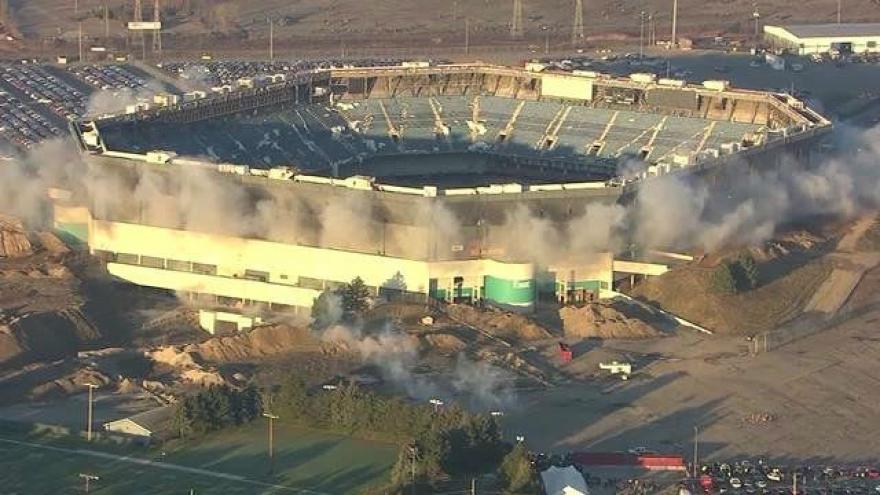 (CNN) -- It began with the familiar dramatic scene: A series of bright flashes chased each other around the condemned stadium, emitting dozens of plumes of smoke.

And then ... nothing. As the smoke cleared, Detroit's famed Silverdome was still standing.

Explosions went off Sunday at 8:30 a.m. The mayor's office in Pontiac, where the Silverdome is located, said it had been informed by the company responsible for the demolition that only the kicker charges detonated, meaning the implosion did not take place.

"Although we're waiting for a final assessment from the Adamo Group, we have been informed by them that eight shape charges didn't go off on the main columns," Mayor Deirdre Waterman said in a statement.

Waterman praised the camaraderie of those who had gathered to share their memories of the Silverdome. "It was great to see so many people who came out to witness what was expected to be a partial implosion of the upper metal ring of the Silverdome as the start of an estimated 9 -- 12 month process of demolition," she said.

The site's eventual redevelopment "will be one of the economic opportunities that are marking a new era for the City of Pontiac," the mayor's office said.

An official at the Silverdome site told CNN affiliate WDIV the implosion did not go according to plan. Explosives were placed on each of the steel beams that support the Silverdome's upper ring. The blasts were intended to break the beams and cause the colossal ring to come crashing down, WDIV reported.

"It's going to collapse -- we just don't know when," one official said. "We just have to wait and let gravity do its job."

The Silverdome was "built a little too well," one official joked.

Social media users didn't wait for official word on what happened to start poking fun at the fact that the stadium was still there.

As the dust around the stadium settled, one Twitter user wrote, "We're 10 minutes post-explosion & the #Silverdome is still standing. The place must be waiting until the 4th quarter to actually implode."

The Detroit Lions are a favorite target of Twitter users reacting to the Silverdome implosion. One posted, "The #Silverdome not collapsing when the charges went off might be the most #Lions thing in the history of Lions things."

Another echoed that, calling the failed implosion "One last Silverdome fumble." One more wrote it's a "Fitting end for the #silverdome. Even the walls are afraid to cross the goal line."

A second run at the implosion on Monday was a success in collapsing the upper ring of the Silverdome, according to CNN affiliate WDIV.

The stadium opened in 1975, hosting the Detroit Lions until 2002. The Detroit Pistons also called the Silverdome home for a decade, until 1988.