After her husband died from coronavirus, she found an emotional goodbye note on his phone 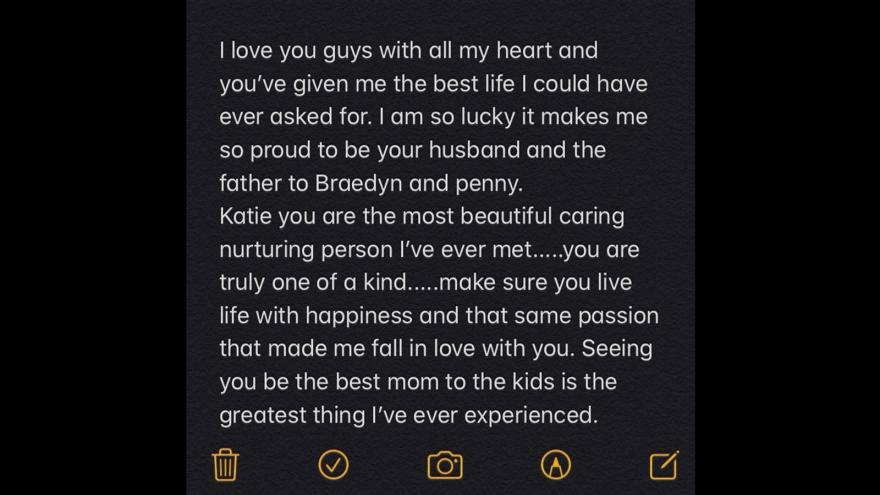 After her husband Jonathan Coelho died from coronavirus, Katie found an emotional goodbye note on his phone.

(CNN) -- "I love you guys with all my heart and you've given me the best life I could have ever asked for."

That's the beginning of a goodbye note one woman found on her husband's phone after he died from coronavirus this week.

Jonathan Coelho, 32, passed away on April 22 after a 28-day battle in the hospital and 20 days on a ventilator, his wife, Katie Coelho told CNN.

Now she's processing the sudden grief, and wondering how their two young children will react.

"They don't know that they lost the greatest human being and they'll only know their dad through pictures and videos," she said Friday night on Anderson Cooper's show.

Jonathan seemed to be getting better, she said, and doctors had discussed taking him off the ventilator last Thursday or Friday.

But early Wednesday morning Katie said she got a call from a nurse at the hospital in Danbury, Connecticut asking her to make her way over. By the time she got there, Jonathan had passed away from cardiac arrest caused by his coronavirus symptoms. She didn't get to say goodbye.

And even though the couple didn't get the proper farewell they deserved, Jonathan left something special for Katie to discover in his absence.

Gone but not forgotten

"They brought me into his room and he was laying there and he just looked scared," she said. "He didn't look peaceful and I just kept saying 'I'm sorry.'"

Katie collected a plastic bag filled with her husband's possessions and headed home.

"For some reason in my delirium, I wanted to get all of the pictures of my husband and my kids off of his phone," Katie said.

She turned the phone on and found a note from Jonathan along with his life insurance information.

"I am so lucky it makes me so proud to be your husband and the father to Braedyn and Penny," he wrote. "Katie you are the most beautiful caring nurturing person I've ever met. You are truly one of a kind...make sure you live life with happiness and that same passion that made me fall in love with you. Seeing you be the best mom to the kids is the greatest thing I've ever experienced."

Katie said she was really taken aback when she saw it.

"If I was sick and feeling crummy, I don't know if I would have had the strength to give my family a goodbye letter," she said. "And to make sure they knew how much I loved them and how happy I was with them."

The couple of seven years met in college. They became friends and dated other people for a while.

"He was always my go-to person," she told CNN's Cooper. "He had an amazing way of always making you feel safe."

Finally, in 2011, Jonathan said, "Why haven't we been dating each other this entire time?"

They married and have two children together, Braedyn, 2, and Penelope, 10 months. Braedyn was born with several medical complexities including cerebral palsy, according to Katie.

But the road to parenthood wasn't easy. The pair had two miscarriages and went through IVF.

When Braedyn was born doctors predicted he only had 6 weeks to a year to survive. Because of his health complexities, Katie looks after the kids full time while Jonathan worked at a courthouse close to home.

With Braedyn considered a high risk individual, Katie said the family went above and beyond to make sure they were social distancing and quarantining at home to reduce their exposure to germs.

Katie said two weeks prior to her state's stay-at-home orders, she remembered Jonathan calling her from work to tell her just how worried he was about the potential for what was to come.

Jonathan, a probation officer, considered an essential employee, was still going to work. Katie said she canceled all of Braedyn's therapy appointments and the family began self-quarantining at home.

On March 23, Jonathan got tested for coronavirus after finding out he had come in contact with someone who had tested positive during the week before.

'I can hear him so clearly in my mind'

Jonathan tested positive on March 25 and was admitted to the hospital a day later after he started experiencing headaches, coughing, stomach problems and issues with his sense of taste and smell.

By all accounts, Katie said her husband was a healthy man with no pre-existing conditions.

"When you have heard of people passing, you read the stories and you almost look for a justification like oh, they were 65 years old or they smoke or have pre-existing conditions, but my husband doesn't fall under any of these categories," she said.

Katie said the last time she had a coherent, logical conversation on the phone with Jonathan was on March 29. Later that evening, the couple exchanged a final set of texts.

According to the time stamp on Jonathan's note to Katie, he wrote the note to her during that phone call. The next day he was intubated.

A Facebook page dedicated to documenting Braedyn's medical journey turned into a place for Katie to document what was happening with her husband.

In the first few weeks while Jonathan was hospitalized, the nurses would call Katie and sometimes FaceTime her so she could talk to Jonathan.

"I've found myself replaying memories in my head to picture what Jonathan and my conversations would be for the day," she wrote. "It's my only comfort, because I know him so well, I can hear him so clearly in my mind."

She told Cooper, "I keep thinking in my head there will be a time when I've been without my husband longer than I was with him, and it hurts a lot."

Katie said she wanted to share what happened to her husband in hopes of painting a raw picture of the reality of how going to work cost her husband his life.

"My husband should not have died Wednesday morning," she said. "But he did."

On April 22, Katie posted a video memory of Jonathan with the update that he had passed and hours later, a link to his obituary.

"The pain we are feeling is indescribable, Katie wrote on Facebook. "Our everything was stolen from us. My heart is not even broken it's shattered. My kids and I will live the rest of our lives without Jonathan. And I don't know how we're going to do it."

A GoFundMe account has been setup to help The Coelho family.