After reviewing video, prosecutors charge police inspector instead of protester 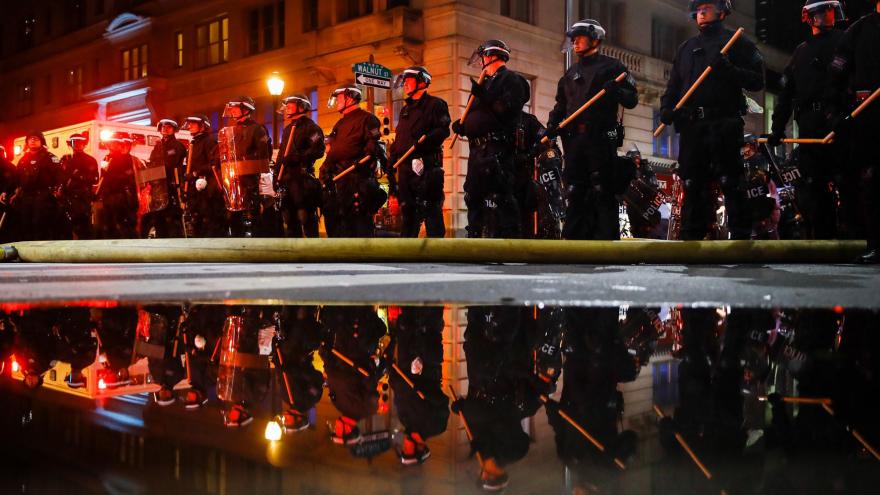 Philadelphia police are reflected as they stand guard during a protest over the death of George Floyd on Saturday, May 30, 2020. A Philadelphia police inspector is facing charges after prosecutors said a video shows him striking a student protester on the head with a metal baton.

(CNN) -- The Philadelphia police inspector who is accused of hitting a protester with a metal baton was arraigned Monday, court records show.

Bologna did not enter a plea at this stage, according to Jane Roh, spokesperson for the district attorney's office. His bail was set at $10,000, according to court records.

Prosecutors say Bologna was captured on cell phone video striking a Temple University student in the back of his head while he was participating in a mass demonstration on Monday.

In a statement to CNN, attorney Fortunato N. Perri said that Bologna's use of force was ultimately lawful.

"His use of force to apprehend an individual, who was trying to thwart a lawful arrest during a melee, was lawful and justified."

Philadelphia police arrested the student protester and detained him for more than 24 hours and referred him to the district attorney for prosecution. But after prosecutors reviewed the video and other evidence, Krasner declined to charge the student and charged Inspector Bologna instead.

"We are trying to be fair. Accountability has to be equal," Krasner said "This moment demands a swift and evenhanded response to violent and criminal acts based on the facts and evidence."

Bologna is no longer on patrol duty, according to local station WHYY.

"Right now, I'm handling operations from the office," he told the station in a phone call Friday.

"In the midst of this deadly pandemic, Inspector Bologna and his fellow officers were spit on, sprayed with urine and other chemicals as well as verbally and physically assaulted," the statement said.

The Philadelphia Fraternal Order of Police vowed in a statement to "vigorously defend Bologna against these baseless allegations and charges."

The police union said they were "disgusted" to learn about the charges. Bologna, a police officer for more than 30 years, was "engaged in a volatile and chaotic situation with only milliseconds to make a decision," the union said.

Philadelphia Police Commissioner Danielle Outlaw said Friday that while she was not privy to all of the information that led to Krasner's decision to charge Bologna, an internal affairs investigation on the matter had already been initiated and would continue regardless of the district attorney's prosecution.

"As a department, we do not condone the criminal acts of any person, and it is my sincere hope that the district attorney does, in fact, hold all people who cause harm to others equally accountable," Outlaw said.